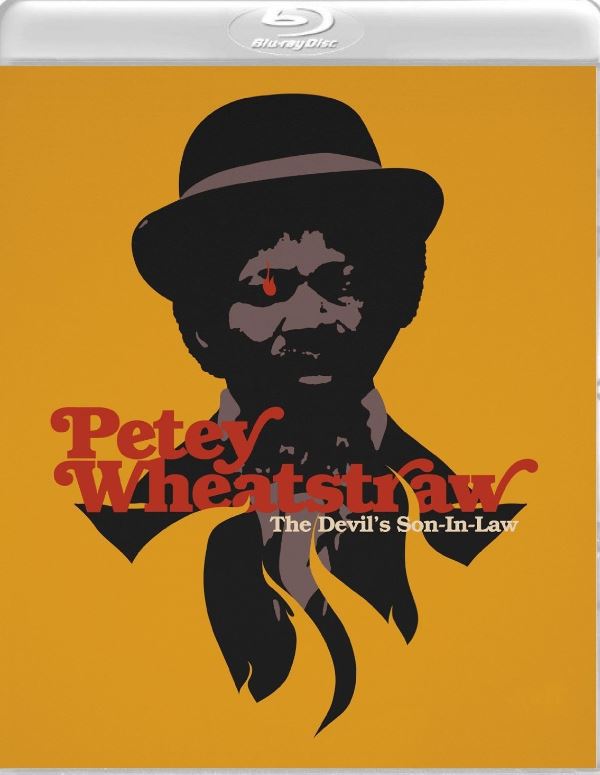 Fans of the underappreciated,  influential comedian, actor, and kung-fu master Rudy Ray Moore, owe cult-film restoration company Vinegar Syndrome a great debt of gratitude.  Not only did they restore and transfer Moore’s most famous character/alter-ego Dolemite to Blu-ray in the form of Dolemite and Dolemite 2: The Human Tornado, they also reached into the vaults for the unofficial third entry in Rudy Ray’s gonzo trilogy: Petey Wheatstraw aka The Devil’s Son in Law.   If your RRM collection stopped with the Dolemite films, you are really missing out on this horror-comedy blaxploitation gem from 1977, showcasing all of the sensibilities that have endeared Moore to his legion of underground fans.

Petey Wheatstraw picks up exactly where director Cliff Roquemore’s Human Tornado left off in terms of logic-defying story elements and the willingness to not only push the limits of good taste, but throw them out the window for comedy’s sake.  This film is really the “spiritual (or devilish) twin” of Tornado and the original Dolemite film seems tame in comparison to both of these classics.  Wheatstraw starts with a classic rap by Moore(who personally financed the production) and we get to witness his birth on the night of “that Great Miami Florida Storm”.  The doctor, played by J.B. Baron (famous as the racist redneck sheriff from The Human Tornado) delivers Petey in one of the most memorable births ever witnessed on the silver screen, including a water melon and a roughly ten year old newborn.  Coupled with a training session ripped straight from a Shaw Brothers Kung-fu epic, you know you are in for a real roller coaster ride of surreal mayhem and laughs.

The most prevalent motif found in any Rudy Ray Moore film is the lucrative nature of night clubs and comedy acts.  Each film always centers around a club or talent take-over by a devious gangster, in this film’s case, “Mr. White” and Leroy and Skillet (two of Moore’s contemporaries from the x-rated party record circuit).   Once Petey comes to town as competition for the opening of Leroy and Skillet’s new club, there’s only one solution: kill Petey. Death can’t stop Petey though, and once a deal is struck with “Lew Cipher” to marry his homely daughter, Petey is back for revenge.

All of the standard camera tricks and doubling that was standard for many blaxploitaion and low budget action films of the day can once again be found in abundance here.  Almost every fight scene featuring Moore is carefully shot with his back to the camera, as a more “traditional” martial artist performers in his place.  Don’t worry though, Moore is still plenty visible when it comes to his patented head bobbing and shaking before and after each scene! Fast Motion is also used for comedic effect, especially in a chase featuring some car thieves.

This film was certainly meant to capitalize on Moore’s two previous hits and the Devil-based films of the 1970’s such as the Exorcist and the Omen. Although not as financially successful as either Dolemite film, it has long been a favorite of grind house cinema fans for the continuation of Moore’s film legacy.  The blu-ray transfer helps the scene quality immensely and allows viewers to enjoy scenes like a truck full of watermelons exploding and Petey’s bachelor party with a whole new level of color and clarity.  Whether you are a long time fan or a new Moore apostle, you best “catch the first thing smokin” and get yourself a copy of this unearthed gem.