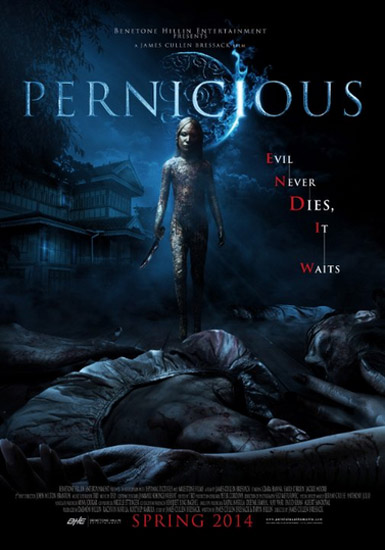 Synopsis: It was supposed to be an adventure of a lifetime as three young girls spend the summer in Thailand. But their adventure quickly becomes a nightmare when the trio unleashes the spirit of a murdered child with only one thing on her mind – revenge.

After a night of partying the week before their teaching gig starts, Alex, Julia and Rachel dream that they kill their dates, in a scene of sadistic, brutal torture. Believing they were drugged and robbed, they search for the golden statue of a child stolen from their rental house, only to find out that they are being stalked by the ghost of a murdered girl.

‘Pernicious’ is reminiscent of Japanese horror classics like ‘Audition’, with it’s brutal depictions of torture by the hands of a woman, and ‘Ju-On’ (The Grudge) with its creepy, crawling, revenge bound ghost and it’s tragic back story. Jackie Moore was excellent as the pessimistic and blunt Rachel. Ciara Hanna is great as Alex and Emily O’Brien is as the emotional Julia. I particularly enjoyed the ending of the film, which wrapped up in a fun and un-cliche way. Written and directed by James Cullen Bressack, the film combines the best of both worlds, gore and blood mixed with spirits and possession into a unique, bloody horror story you won’t soon forget.