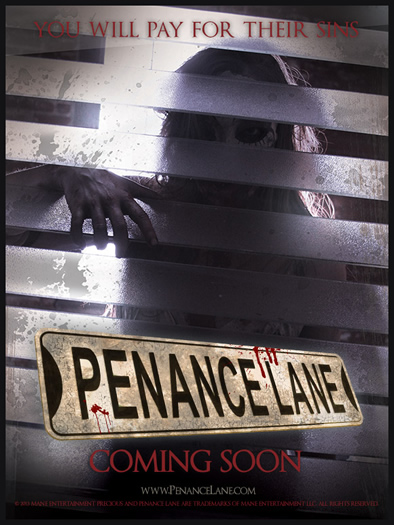 Horror News Network: “Penance Lane” is Mane Entertainment’s second film, “Compound Fracture” being the first. What drew you to this project?

Tyler Mane: This project came my way a few years ago from Munier and I was just drawn in by the mix of both horror and action. Two of my favorite genres. As an actor, I look for scripts that allow me to both do what fans expect of me, but also that give me a chance to stretch my wings as an actor. PENANCE LANE lets me do both and the visuals in the film are pretty awesome.

Horror News Network: The film centers around a man just released from prison, on the road to redemption who finds himself dragged back into a dark place. Without giving too much away, what is it like playing sort of a complicated character in this film?

Tyler Mane: I guess I’ll have to answer that question when filming is done! But I look forward to digging into him. He wants to believe he’s only out for himself, but you see pretty quickly that he has a hard time walking away from others in trouble. I need to make sure the audience sees the journey he takes to accept that fact about himself. It’s usually in our darkest times of our lives that we make the most progress as people. I’d say that what happens in this house is about as dark as it gets.

Horror News Network: Currently, there is an Indiegogo campaign to get this film made. (*Fans can check it out here: http://www.indiegogo.com/projects/penance-lane ) There are so many great horror films being made that are indie, as opposed to big budget. You’ve been involved on both sides. What do you see as the differences in filmmaking?

Tyler Mane: Less cooks in the kitchen. Studios are always concerned with budget, but sometimes that budget is going into $100K private jets for execs to visit set. In indie film, every dollar goes onto the screen, and you don’t have anyone telling you what to do. It’s a more clear vision start to finish I think. Plus, when your budget is lower you have to be very creative. You can’t just assume some giant CGI budget is going to make you look good in the end.

Horror News Network: With the Indiegogo campaign, backers can actually have a chance to have an on screen role in the film and visit the set. Do you have parts and some lines prepared already?

Tyler Mane: We have ideas. But we’ve already been talking to the first couple people who are taking advantage of those incentives, and we have the flexibility to tailor roles to what they look like and where they’ll be best cast. One guy’s going to get killed by me and Renae has been talking to him about what weapons he wants in the fight. It’s pretty fun actually!

Horror News Network: The trailer for “Penance Lane” looks really dark and very promising for horror fans looking for something fresh. What do you think is going to make this film stand out?

Tyler Mane: Everyone who reads the script comes away a little disturbed. It’s dark. Very dark. There’s gore, but I think it’s the psychological aspect that will really mess with people.

Horror News Network: With “Compound Fracture” just securing distribution (Congrats!), what is on the horizon for Mane Entertainment?

Tyler Mane: Thank you! We just want to keep making movies. Every day I can wake up knowing that that’s what I get to do today, is a good one! And I want to thank every person who supports us along that road. We make movies for people to enjoy. Without the fans, we’re nothing!

Horror News Network: Thanks so much Tyler!