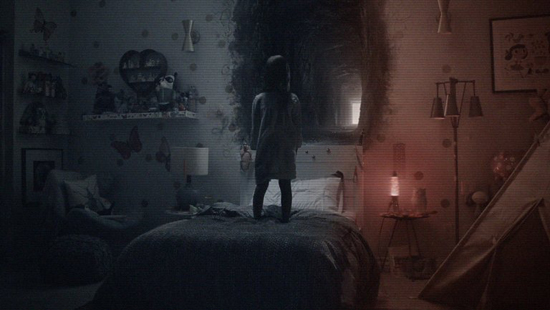 ‘Paranormal Activity: The Ghost Dimension’ will be premiering at Screamfest Horror Film Festival in RealD 3D at the TLC Chinese Theater on Tuesday, October 22.   The first film in the series made it’s debut at the same festival in 2007.

Screamfest director Rachel Belofsky said “We are thrilled to have the Paranormal Activity: The Ghost Dimension premiere close this year’s festival.  We are so proud of Oren Peli and his success with the franchise. It’s great to have him back in the festival where it all began.”

The original film was released via “Demand It” fan screenings before it’s wide release in 2009. The latest will be simultaneously be screened in those original 12 markets, in a nod to the importance of the fans.   The markets that will be featuring it are Ann Arbor, MI; Baton Rouge, LA; Boulder, CO; Columbus, OH; Durham, NC; Lincoln, NE; Madison, WI; Orlando, FL; Santa Cruz, CA; Seattle, WA; State College, PA; and Tucson, AZ.

Director Oren Peli said “It’s incredibly exciting, and somewhat surreal, to premiere the final installment of the Paranormal series at Screamfest where the first film premiered eight years ago. These films continued to be made because of the incredible fans that supported them from the very beginning, so I look forward to bringing the series back to its roots to honor them.”