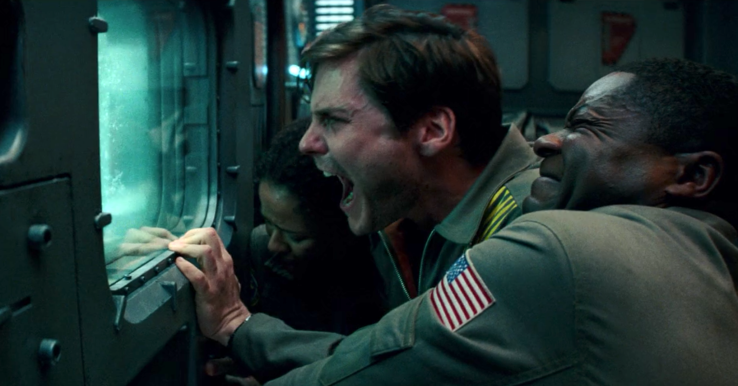 The Hollywood Reporter‘s sources say that Netflix paid Paramount more than $50 million for the rights to stream The Cloverfield Paradox. Negotiations reportedly began over the holidays and were finalized in January in time for the major Super Bowl stunt we all witnessed on Sunday. The sale means that Paramount likely thought they couldn’t earn at least $50 million at the domestic box office, and the movie’s low critical reviews and mixed fan reaction suggests they probably made the right choice to sell the movie. The studio still plans to bring the movie to China, so it will be interesting to see how The Cloverfield Paradox performs on an open market.

So, does the direct-to-streaming status and lackluster reaction to The Cloverfield Paradox mean that the franchise is done screening in U.S. theaters for good? No! According to The Wrap’s sources, the deal “was a one-off ‘that makes the film immediately profitable.'” Paramount still plans to debut Overlord, the upcoming supernatural World War II film meant to serve as the fourth Cloverfield movie, in theaters on October 26th, 2018.

One thing to keep in mind with this new information is that the Cloverfield franchise hasn’t exactly been consistent when it comes to keeping release dates and announcing accurate pre-release details. The Cloverfield Paradox was most recently postponed to an April theatrical release just weeks before exploding onto Netflix, and we’ve only just learned that Overlord would be the next Cloverfield movie on January 29th. It’s safe to take all of these details with a grain of salt until we get a little closer to the planned October release date.

Wherever and whenever the next Cloverfield movie ultimately debuts, you’ll hear all about it first right here at Horror News Network. Stay tuned for all of the latest details on the franchise as soon as they break!