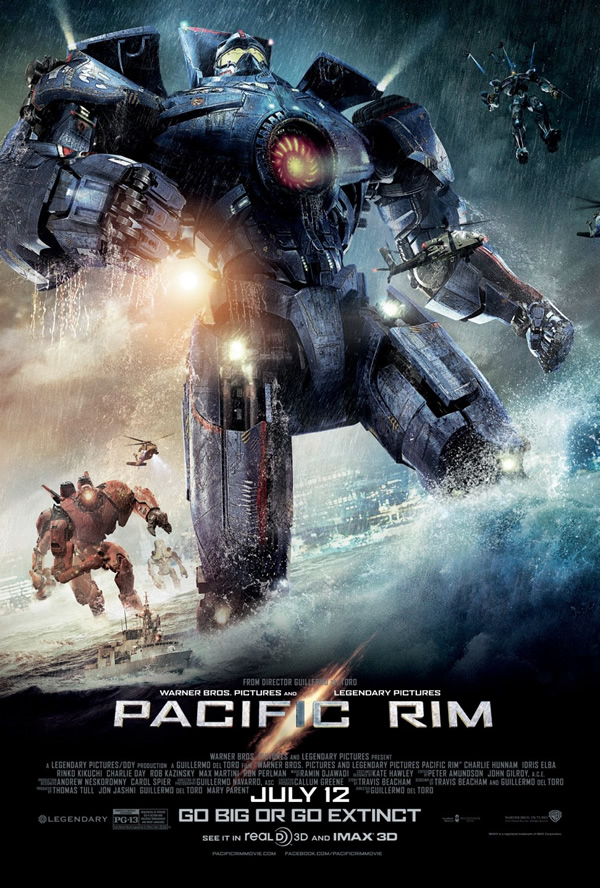 Synopsis: When legions of monstrous creatures, known as Kaiju, rose from the sea, a war began that would take millions of lives and consume humanity’s resources for years on end. To combat the giant Kaiju, a special type of weapon was devised: massive robots, called Jaegers, which are controlled simultaneously by two pilots whose minds are locked in a neural bridge. However, even the Jaegers are proving nearly defenseless in the face of the relentless Kaiju. On the verge of defeat, the forces defending mankind have no choice but to turn to two unlikely heroes—a washed up former pilot (Charlie Hunnam) and an untested trainee (Rinko Kikuchi)—who team up to drive a legendary, but seemingly obsolete, Jaeger from the past. Together, they stand as mankind’s last hope against the mounting apocalypse.

Our Thoughts: The much anticipated Pacific Rim by Guillermo del Toro has officially arrived and we had a chance to check it out today.

You would be hard pressed to find a young boy who didn’t love having their robot toys battle it out with their monster toys; for me a lot of those battles consisted of Voltron vs. Godzilla. So when Pacific Rim came out, I knew I had to see it as it reminded me a bit of those childhood battles.

At this point, we all know the plot: giant monsters are destroying the world and we need the Jaegers to stop them. We are soon introduced to the main cast who do a pretty decent job in their roles; Idris Elba, Charlie Day and Ron Perlman were among the best.

Lets’ get down to what everyone cares about: the robots and the monsters.
Robots: The robots, or Jaegers as they are known, are huge mechanical weapons of destruction. Each of these robots has pilots which control their suit. Everything from walking to fighting is done in unison. Each robot seems to have its own specialty and secret weapon when it comes to combat.

Monsters: The Kaiju are big nasty creatures capable of killing thousands in a matter of seconds. These monsters look as if they would be from the ocean, which makes the reality factor even better.

Robots vs. Monsters: There were a handful of battles in Pacific Rim and each battle seemed to outdo the last. The amount of destruction caused by the battles was great fun to watch as well. The Jaeger pilots know that you may have to use anything as a weapon to put down a Kaiju.

For those that haven’t seen it yet, think of Pacific Rim as Godzilla meets Transformers meets Independence Day. I believe that Guillermo del Toro definitely captured what he was going for here, to transport guys back to their days of pitting their monster toys against their robot toys in their bedroom arenas for a few short hours.