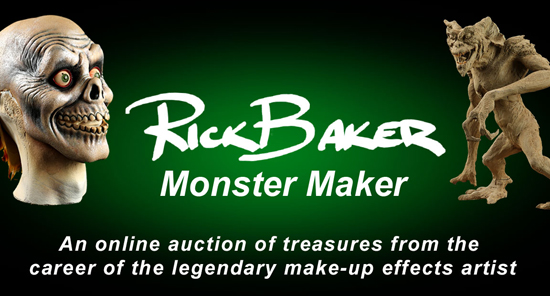 Original Gremlin puppets, werewolf masks from The Wolfman and zombie costumes from The Haunted Mansion are just a few of the more than 400 Rick Baker creations set to go under the hammer in Prop Store’s upcoming Rick Baker: Monster Maker online auction. During a career that spanned more than four decades, Baker created many of cinema’s most memorable monsters and creatures. Some of these treasures will be auctioned by Prop Store, with bidding opening on November 2nd.

When Baker announced his retirement and the closing of his storied Cinovation Studio earlier this year, film memorabilia specialist Prop Store was called on to help find new homes for the pieces of movie history Baker could no longer retain. In May of this year, the Rick Baker: Monster Maker Live Auction was hosted by Prop Store in Los Angeles. An amazing opportunity for Baker’s passionate fans, the sale was an overwhelming success. Now, fans and collectors have another opportunity to own a piece of Baker’s legacy via this follow-up online auction.

Some of the notable pieces collectors and fans can bid on at no reserve include:

• Wolfman masks from The Wolfman

• Senator Nado finished cowl from Planet of the Apes

• Grinch bust with mask from How the Grinch Stole Christmas

• Harry’s hands from Harry and the Hendersons

Brandon Alinger, Prop Store COO, said: “It’s been an honor to work with Rick Baker on this amazing collection, and both Rick and Prop Store are pleased to know that the artifacts will live on in the loving homes of new owners.”

The auction begins at 9:00AM PST on Monday November 2nd when over 400 lots will open for bidding. Bidding on all lots will close throughout the day on Friday November 13th. Bids can be placed online via the Prop Store website at www.propstore.com/auction