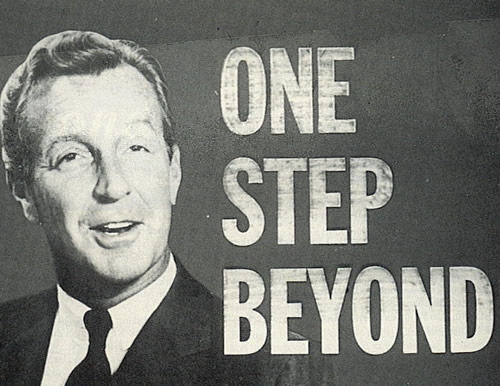 ‘One Step Beyond’ Coming to DVD April 7th

One Step Beyond explores the amazing world of the unknown through dramatic re-enactments of mysterious “real life events.” Seventy of the 96 original episodes will be available April 7 in a special, six-disc DVD collector’s set from Film Chest Media Group.

Produced a year before the Twilight Zone, One Step Beyond – which ran on ABC for three seasons (1959-1961) – sparked the growing interest in paranormal suspense in the late 1950s. Rather than creating fictional stories with mystical twists and turns like the more well-known sci-fi series of the time, this program sought out “real stories” of supernatural events to be re-enacted.

From ghosts and monsters to mysterious disappearances, each eerie episode presents storylines that defy common understanding of reality. No solutions to these mysteries were ever found, leaving viewers bewildered… wondering if the paranormal truly exists.

Hosted by John Newland (Don’t Be Afraid of the Dark, Peyton Place, Dr. Kildare), this set includes the most original episodes ever offered in a single package to date. BONUS: Episode guide with synopses.

One Step Beyond is presented in full screen with an aspect ratio of 4 x 3 and original sound.