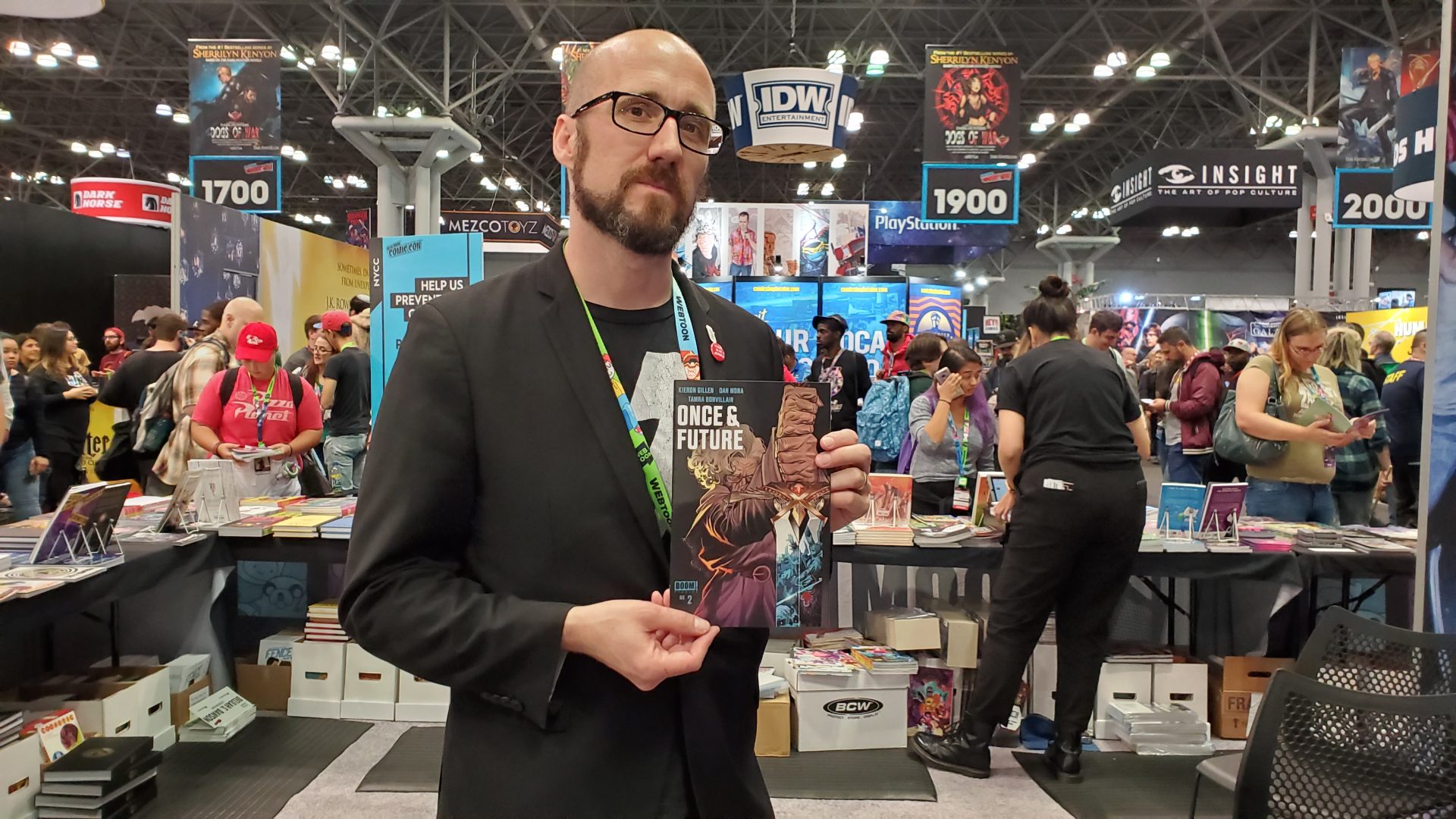 Kieron Gillen is an instantly recognizable name to comic readers.  Whether you know him as the man that complicated Tony Stark’s family history, detailed a teenage Loki’s misadventures, or created one of the most memorable Star Wars characters in Marvel’s return to the series (in the form of the enigmatic Doctor Aphra), Gillen’s accomplishments speak for themselves.

And while the vast majority of fans are familiar with his work for Marvel Comics, Gillen has also been successful at creating his own worlds for independent publishers such as Image (The Wicked + The Divine, Die), Avatar (Uber), and Boom! Studios (Mercury Heat, Peter Cannon: Thunderbolt).  His most recent foray into creator-owned comics consists of his and artist Dan Mora’s (Buffy The Vampire Slayer, Klaus) take on Arthurian Legend in a contemporary setting, entitled Once and Future (from Boom! Studios).

Gillen spent some time with us at NYCC 2019 and answered questions related to Once and Future as well as some of his other fan favorite series.

Horror News Network: You’re know as someone who does a ton of research for the stories that you write, so what type of research did you put into Once and Future?

Kieron Gillen: I was just chatting with a friend and they said, maybe you should try to do a book with no research!  Once and Future is actually a little on the lighter side in terms of research.  As opposed to Die (a series that Gillen has described as a “goth Jumanji), I’ve  read over 30 books for Die, with Once and Future, there are so many Arthurian myths, and this story is about how the myths change, so I was more interested in the academic level, so I was reading academic overviews on the literature, so it goes through how the Grail myth changed as well as how the Grail myths start.  They go from histories to romances, as he starts as essentially a Welsh nationalist figure and becomes this French idea of what a British character is, and then introduces Lancelot to the story once the French start writing it.  This was the kind of research I was interested in, especially if anyone has ever done Arthur as a villain.  I haven’t found anyone who has done Arthur as a straight villain.  And of course he’s not just a straight villain, but has anyone does Arthur as an antagonist? Mainly to decide what I wanted to see in Arthur.

HNN: Is this going to be mini-series, or do you plan on telling a larger story?

Gillen: Originally, I was thinking it was going to be a mini, but as soon as I did the research and plotted, I realized that this all mainly about the Grail knights, there is no Merlin in it, Lancelot isn’t in it, Guinevere isn’t in it, but as far as genuinely big Arthurian pieces such as the questing beast, the really core Arthurian stories, I haven’t touche them, so I should do more.  Now that we are doing it as an on-going, there is a lot of British folklore per se in there, Arthur is the main back bone, but I’m using other folklore from the British Isles; it’s a wide pallet.  I’ve got to do some more research now because I want to bring in something slightly different in the second arc.

HNN: The response by fans to Once and Future has been very supportive, as issue one just went into a sixth printing.

Gillen: Comic off of Wicked + Devine, which just finished this week I think, and Die has done enormously well for Image, it feels like I am on a hot streak and it certainly helps that I am working with some of the most amazing artists in the industry, but people have seemed to respond really well to it.

HNN:  You mention the fine artists that you’ve been lucky enough to work with, how does Dan Mora’s art style suit this project?

Gillen: Most writers have this treasure chest of ideas that they play with, and I thought Dan would suit Once and Future since it is a big, ballsy action piece.  Whereas Die is somewhat intimate and literary, Once and Future is a blockbuster.  Dan can be drawing anything, but he’s doing this, and that immediately defined what the book would be big blockbuster action movie with really strong characters, so it was all built for him from the ground up.  I knew he could draw horror/adventure from his work on Buffy: The Vampire Slayer.  It’s always a collaboration.

HNN: A lot of readers enjoyed your alternate history/horror superhero story for Avatar press, Uber.  Do you have any plans to return to the book, with all of the series you are currently working on?

Gillen:  I was actually thinking about how I could get back to Uber last week  and Avatar is just trying to get their ducks in a row, but I am committed to finishing the story when it is possible to do it.  There are no solid plans yet, but it would be really sad if we never got to finish it.  If not, I’ll get everyone into the pub and tell them how it ends.

HNN: You’ve done extensive work for Marvel particularly in the Star Wars universe, and your character Doctor Aphra has become such as big hit, and a real fan favorite, would you surprised if she shows up on a television series or in a film down the road?

Gillen: It’s tough to analyze why a character hits, it’s quiet hard, but the fact that she’s so gray, and she’s aggressively gray, in most universes she’d be straight villain, and she is oftentimes a straight villain, except when she’s not.  It’s pretty clear that she’s not going to become “Han Solo 2”, because of the tension there, and it makes it hard to hang a series on, but you never know.

You never really know what’s going to land.  It’s interesting to see how Jonathan Hickman in House of X and his Sinister is clearly drawing from things I did with my Mister Sinister, and me making Mr. Sinister this aggressively flamboyant character would be the thing that stuck in a big Marvel book, I never would have guessed.  I would not be surprised, but then again, I wouldn’t be surprised if we don’t see her.

Of all the things I’ve done, Aphra is a Star Wars book with a very different character as a lead.  When you’re writing a Star Wars book, you know people are coming for Star Wars, so you introducing a character that you’ve made up, it always feels presumptuous.  People reading Darth Vader might be thinking why should we be interested in this random woman?  But the response to her was a tremendous compliment and it is probably one of the top five moments in my career, and it went much better than I thought it would, not that I have a list!

Once and Future is currently available at finer comic shops everywhere.  Check out the trailer for Once and Future below, and if you’d like a free preview of issue one, be sure to click on the Boom! Studio link right here. 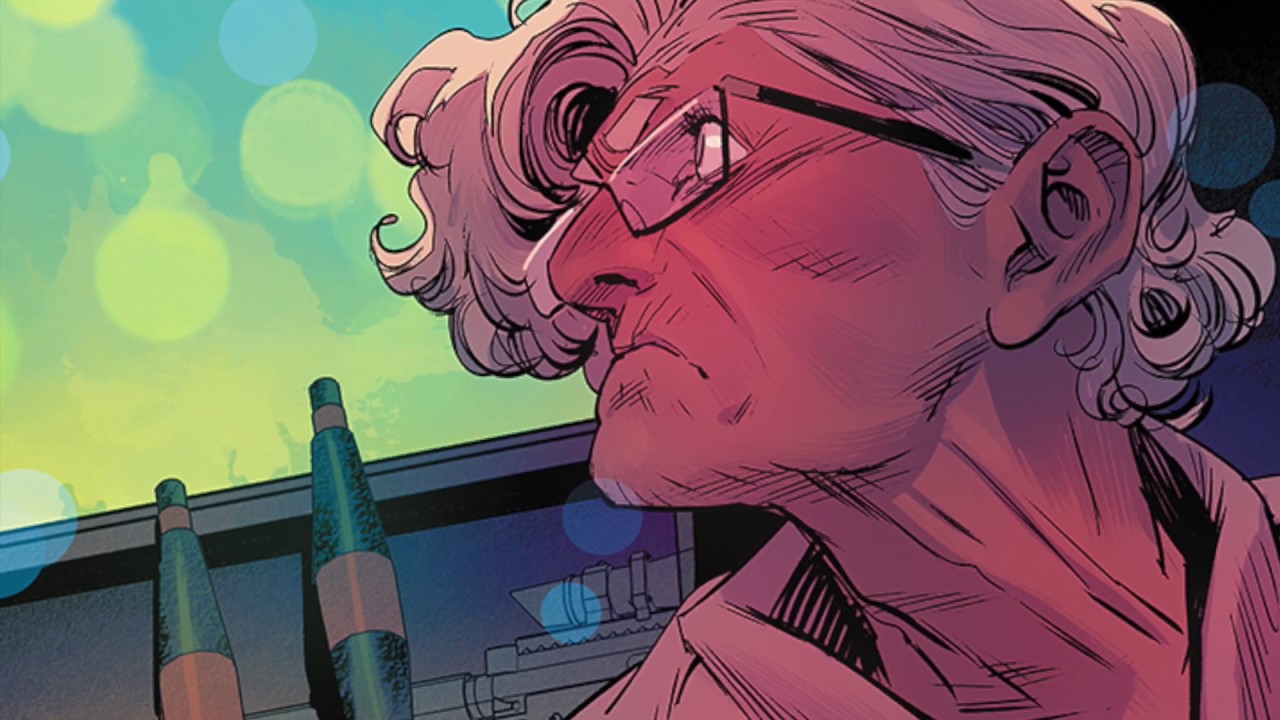 John Evans contributed to this interview.