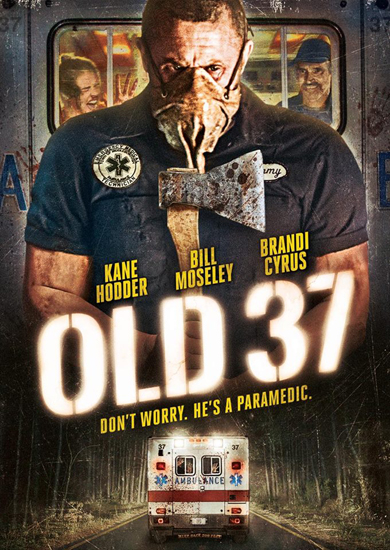 Featured in “New & Noteworthy” on iTunes

October 7 th, 2015 – Thrill-seekers and gore-lovers rejoice, OLD 37 is answering your call! Dubbed as new and noteworthy on iTunes as well as winner of Best Film and Best Kill at Montreal ComicCon’s HorrorFest along with Best Feature at HorrorHound, indie-horror film OLD 37 is officially available for purchase on DVD (via Epic Pictures & Anchor Bay Canada). Fans can pick up a personal copy in-store at over 2,400 Wal-Mart locations across the US! For more information, please visit: www.old37themovie.com.

With recent theatrical premieres in Long Island, Massachusetts, Chicago and New York City, OLD 37 has been selected to return to the big screen in New York City at the 6th annual NYC Independent Film Festival on October 17th at 3:15pm. In addition, the film will be featured at Rock And Shock 2015 in Worcester, MA on October 17th at 9pm! Following the screening, fans will be able to attend an exclusive Q&A with starring actor Bill Moseley (The Devil’s Reject, House Of 1000 Corpses, The Texas Chainsaw Massacre 2). Details below!

OLD 37 is the last ambulance ride you’ll ever take. The film takes you on a journey through the lives of careless selfish teens and how two psychotic brothers (Kane Hodder + Bill Moseley) intercept emergency calls in their father’s old ambulance to perform their own heinous medical procedures. The two worlds collide. When a shy girl-next-door becomes their latest target, she turns the tables on her captors to fight for her survival. Fast paced and blood soaked, OLD 37 taps into the most basic human fear, vulnerability. The words “don’t worry I’m a paramedic” will make you think twice before dialing 9-1-1. Fans can take their first look into the film by watching the official trailer now, here: http://bit.ly/OLD37_Trailer.

OLD 37 was written and produced by Paul Travers, stemming from a nightmare he had. With music composed by Darius Holbert (Hobo With A Shotgun, World’s Greatest Dad, Cedar Rapids), and blood, guts and scares provided by Brian Spears and Pete Gerner (We Are What We Are, Late Phases, VHS), this team is ready to bring the sirens.

What The Press Is Saying About OLD 37…

“There are not enough synonyms for “awesome” to use that would accurately convey how great this film is. It is original and chilling with a dash of comedy… Old 37 is a bit like a drama meets horror, it’s almost like watching two different films in one. More times than not, those types of films tend to fall apart and only leave the audience scratching their heads, but the different stories within Old 37 are blended perfectly to make up one awesome movie.” – Little Blog Of Horror

“OLD 37 is a welcomed addition to the Horror genre. It stays true to a classic ’80s Slasher with a gritty feel and has enough brutality to please gorehounds whiles stimulating viewers looking for something more.” – Frank Malerba, Cryptic Rock

“I was a “Happy Horror Fan”. I felt a sense of deep joy that I was going to be given something which is different and sets itself apart from others within that genre. But what was noticeable within those first crucial moments was that the cinematography was fantastic. The colours were so rich and vibrant it added to a clear sense of depth and the dramatic on screen. The choice of music throughout was outstanding and sometimes it was like watching one big masochistic music video. The use of heavy-duty industrial tunes was a perfect accompaniment in watching a pair of psycho paramedics finishing off casualties.” – Amanda Hunt, Scream Horror Magazine

“It’s a match made in Hell when Bill Moseley and Kane Hodder team up to play barbaric brothers.” – Michael Gingold, Fangoria