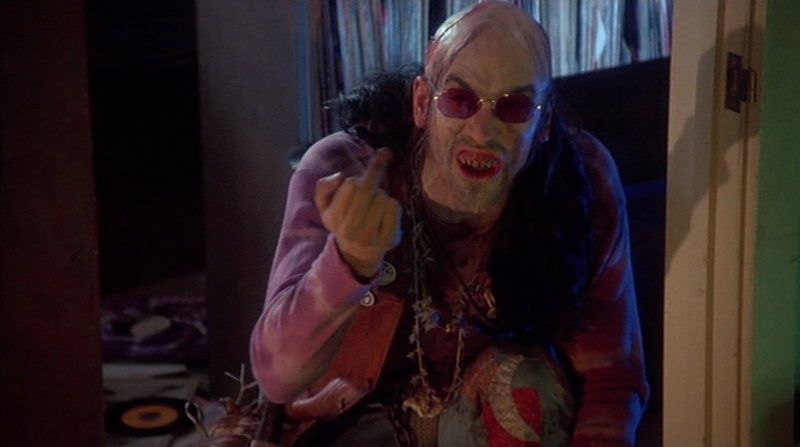 Ten Things You Might Not Know About…The Texas Chainsaw Massacre 2!

10.  Director Tobe Hooper has a cameo, frolicking during a party scene.
9.  During the radio scene with Stretch, right after she plays the tape of the chainsaw killing she puts on the same Star Spangled Banner theme that played in Poltergeist, also a movie directed by Tobe Hooper.
8.  The controversial “butcher cover” of The Beatles album “Yesterday and Today” can be seen hanging in the radio station.
7.  Tobe Hooper deleted a lengthy scene in which the Sawyer family goes out hunting for prime meat.
6.  Jim Siedow is the only actor in this movie that was in the original.
5.  In the original screenplay, Stretch was going to be Lefty Enright’s illegitimate daughter.
4.  The “family group shot,” as seen in the advertisements, posters and video covers, uses the same positioning as the promotional group shot for the movie The Breakfast Club.
3.  Caroline Williams wanted to make a strong impression at her audition. When she was called in, she went to the end of the hallway and ran screaming into the room, where she pulled Tobe Hooper and L.M. Kit Carson out of their seats and used the chairs to barricade the door before she began her scene.
2.  Tobe Hooper and co-writer of the original The Texas Chain Saw Massacre Kim Henkel originally had an idea for a sequel that would feature an entire town of cannibals, and also be a satire of the film Motel Hell, which itself was a satire of the original Texas Chainsaw Massacre. The title of that sequel was to be ‘Beyond The Valley Of The Texas Chainsaw Massacre.’
1.  Dennis Hopper thought this was the worst film he’d ever been in.
Click here for more news and information on the Texas Chainsaw Massacre franchise.
Texas Chainsaw Massacre
Share FacebookTwitterRedditEmail