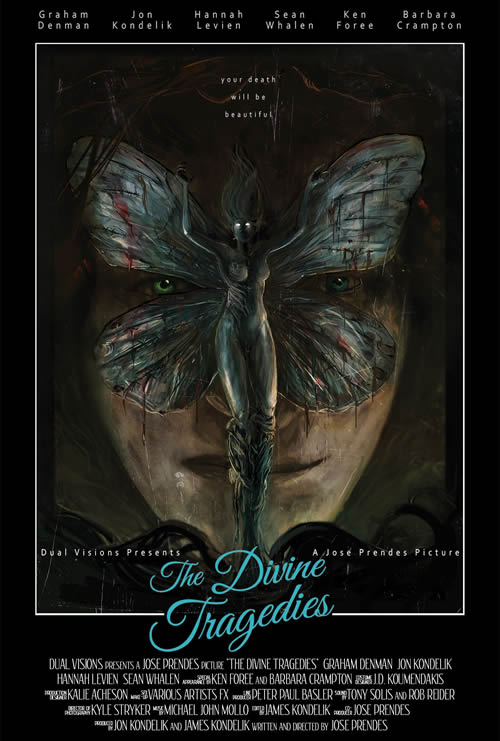 The official artwork for the serial killer fever dream The Divine Tragedies has been released and we have it below.

Writer and director Jose Prendes (The Haunting of Whaley House) and producers Jon and James Kondelik are excited to announce the beginning of principal photography for their fever dream: The Divine Tragedies! As well, the official movie poster has been released for the film, to coincide with the shoot. The official poster was designed by graphic artist Devin Koehler; fans of horror can preview the poster’s mesmerizing imagery here.

The Divine Tragedies, based loosely on the famous Leopold and Loeb murder case, tells the tale of Charles Brubaker (Graham Denman, The Haunting of Whaley House) and his half-brother Thomas Lo Bianco (Jon Kondelik, Airplane Vs. Volcano), who were raised by their arthritis-twisted, alcoholic mother (Barbara Crampton). The boys concoct a deadly game to test their superior intelligence against the dimwitted masses. This game will eventually lead to murder, and when Genevieve, a beautiful single mother, enters their lives they finally find the perfect girl for their first kill. But, problems arise when they quickly discover that Detective Homer Gaul (Ken Foree), a cop with a very special gift, is hot on their trail.

Here is the first look at the exquisite poster for this mind trip of film, designed by Koehler. Producer Jon Kondelik says of the poster’s quality: “I love the poster Devin has created for us. We’ve worked with him on several projects before and he continues to amaze us with his pieces, which are lovingly created throwbacks to the days of the classic artworks from the ‘70s and ‘80s.” Editors and horror fans can see the exquisite artistic detail in the artwork here.