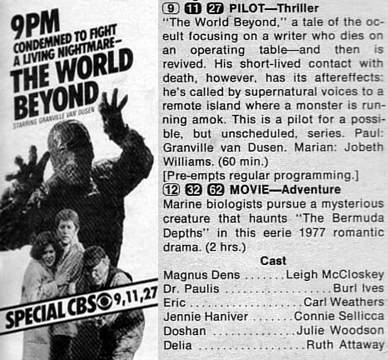 Obscure Horror Cinema: The World Beyond

Any horror kid who grew up during the early 70’s-the early 80’s has to have a soft spot for the made for TV horror movie.  Deprived of seeing some of the epochal horror classics of the 70’s and 80’s in the theaters because of our ages, the 70’s/80’s horror film kid had to rely on TV for that monster fix.  I can understand why millennial generation horror fans would be perplexed by why these clunky, talky, lightweight films are held in such esteem in certain circles but it’s one of those instances when you just had to be there. I pity the horror fan that doesn’t get a thrill from seeing washed up actors and actresses slumming it, poorly designed creature makeup, melodramatic supernatural perils, or well-timed commercial breaks.  The boundary between TV movie and TV series was a very thin one in the 70’s, as the TV movie would often act as a test balloon for the TV series. If the movie got big numbers, then a series might be in the offering ala The Night Stalker. If not, then the TV movie would be a one off exercise in horror programming. Case in point, The World Beyond, a movie/pilot created by Art Wallace and directed by Noel Black. The World Beyond is actually the second of two pilots for this projected television series, the first attempt being The World of Darkness.  Both films star Granville Van Dusen as Paul Taylor, a sports writer who is resuscitated after dying on the operating table. Taylor’s near death experience has granted him psychic powers, specifically the ability to receive messages from the spirit world in order to help the relatives of the departed.  Taylor travels around the country assisting people who are plagued by paranormal phenomenon and black magic. In The World of Darkness, Taylor deals with a case of spiritual possession in New England, which is a bit long on talk and short on scares. The World Beyond is another matter though, as Taylor journeys to an isolated island to defend a dead occultist’s sister from a Golem.  Though Taylor is kind of a boring hero, the atmosphere of the film is great as the Golem stalks the woods and rocky shorelines of the dreary island. The monster looks like a cross between the Incredible Melting Man and Dr. Freudstein, but is effectively shown mostly in shadows. The climax of The World Beyond creates some eerie tension and the Golem is dispatched in a novel way. Unfortunately, the second time wasn’t the charm for Paul Taylor, and this would be occult detective was not granted a series.  At least we have this 1978 oddity to satisfy that made for TV horror itch.