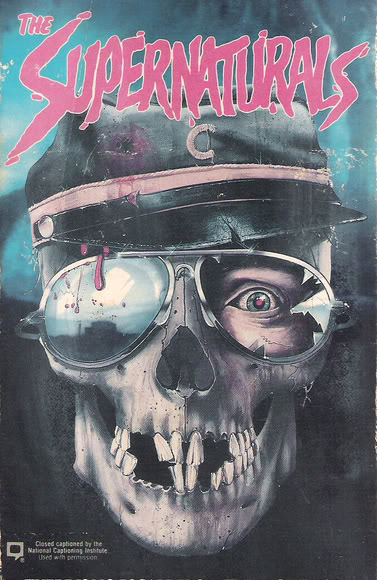 Although the Civil War officially ended in 1865, the animosity between the North and South still flares up from time to time. Starting with Reconstruction right up through, Herschell Gordon Lewis’s Two Thousand Maniacs!, the deep political, economic, and social rift that split families and pitted brother vs. brother in many ways continues to define the American identity. Case in point: 1986’s The Supernaturals. Borrowing a similar scenario from the neglected classic Southern Comfort, The Supernaturals focuses on a group of army recruits on a training exercise in the spooky backwoods of the Deep South. Unfortunately, the area they camp out on was a Confederate settlement whose inhabitants were mercilessly slaughtered by Union troops during the War of Northern Aggression. All this military action revives the long dead Rebels who are looking for some resurrected revenge. Playing on historical guilt, geographical prejudice, and primal fears, The Supernaturals is an atmospheric zombie film that doesn’t fall into the tired living dead cliches that seem to be all the rage these days. And when will you ever see a film that has both Uhura from Star Trek and a Bee Gee in the cast?