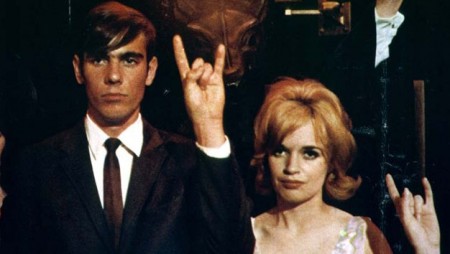 If you think about it, the mondo movie genre is not that different from the current deluge of reality TV shows. Mondo movies are totally exploitative “documentaries” that promise the real! the shocking! the truth! but usually offered only poorly staged reconstructions of the taboo and low quality travelogues of red light districts and exotic locales around the world. 60’s audiences loved to indulge in the sexist and racist thrills that films like Mondo Cane, Mondo Nudo, Mondo Topless, Mondo Keyhole, Mondo Freudo, Ecco, and Primitive Love as other cultures, races, genders, and lifestyles are both condemned and praised, images of titillation and disgust.  The mondo movie became much more extreme through the 70’s hitting it’s prurient nadir in the 80’s with the infamous Faces of Death series of films, where sex and death are presented as interchangeable cheap thrills. Though the mondo movie is one of the most despicable of film genres (particularly in its use of animal cruelty), some of the movies are just so ridiculous and absurd that there’s no way anyone could take them as anything but crude time capsules of some strange times. For those who are interested in the occult chic movement of the late 60’s/early 70’s, The Occult Experience (aka Witchcraft ’70) is a gift from the Dark Lord himself. Claiming to expose the rise of Satanism around the world, The Occult Experience is filled with the most ludicrous satanic rites, devil worship, voodoo cults, black magic rites, an exorcism and pagan sacrifices. Of course, the Church of Satan makes an appearance with the Black Pope Anton LaVey himself conducting a Black Mass with writhing naked acolytes in attendance. With its sanctimonious narration, recreated “real” events, and plentiful scenes of hippy witchcraft and occult “orgies, “ The Occult Experience is evidence that when it comes to mondo weirdness, the Italians were far ahead of everyone else. So for lovers of all those History Channel, Discovery Channel, Travel Channel, and Destination Channel shows that promise to give us undeniable proof of the paranormal but never quite make good on their guarantee, enjoy The Occult Experience: