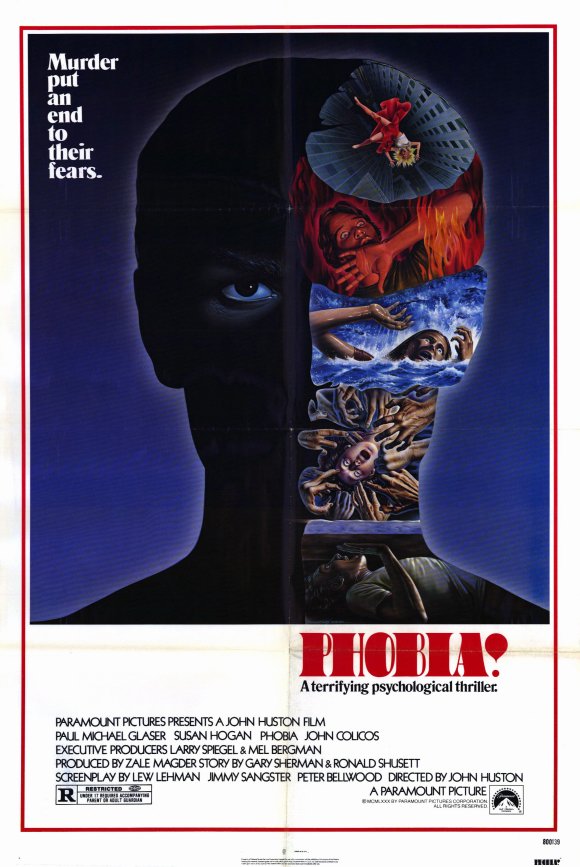 For some reason (probably financial), the late 70’s/early 80’s found many of Hollywood’s former greats “slumming” it in big budgeted horror films. Not that this trend started during this time period, but it seemed to reach its apex (or nadir depending on which side you’re on) at the turn of the decade. Everyone from Orson Welles to Tony Curtis to John Cassavetes to Bette Davis appeared in some ultra bizarre (and not always in a good way) horror movies as their stars continued to dwindle. One of the oddest detours into horror has to be the genre work of legendary director John Huston. Son of the great actor Walter (who played the Devil in The Devil and Daniel Webster) and father of actress Angelica, John Huston directed quite a few of the contenders for greatest film in the history of cinema: The Maltese Falcon, The Treasure of the Sierra Madre (my pick), The Asphalt Jungle, The African Queen, Moby Dick,and The Night of the Iguana. Perhaps the finest American filmmaker ever, Huston was a true maverick, an uncompromising artist who demanded the best from his cast and crew, and most of all, from  himself. Of course, this high level of integrity and quality control would eventually be his undoing and so by the 1970’s, Huston had problems getting financing for his films, though he would eventually make two of the 70’s best: Wiseblood and The Man Who Would Be King. In order to make a living between directing gigs, Huston acted in some great films (Chinatown), some bad films (Battle for the Planet of the Apes and some ? films (Tentacles, The Visitor). With the popularity of slashers and thrillers in the early 80’s, Huston got a directing job, helmming the Hitchcockian horror film Phobia. The film stars Paul Michael Glaser (Starsky!) as a psychiatrist who is prescribing some unorthodox treatments for curing his patients’ phobias. When the patients starts turning up dead, killed by the very phobias they suffered from, the good doctor has to clear his name before he becomes a victim too.  Situated somewhere between Brian DePalma’s postmodern thrillers and John Boorman’s technicolor noirs, Phobia gives Huston an interesting premise (written by Hammer icon Jimmy Sangster, Gary Sherman of Raw Meat fame, and Ronald Shusett, who had a hand in Alien and Dead and Buried) as he stages some innovative but strange scenes, especially when depicting the sadistic techniques that are supposedly deprogramming the doctors phobic patients, like showing a woman with sexual inadequacies video footage of a sexual assault. Not exactly following the Hippocratic Oath, Phobia is a prime example of an old school director trying to adapt to the then current brutal themes of the genre with interesting results.