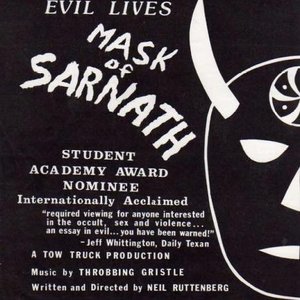 This week’s curiosity might have lain forgotten on the horror film rubbish-heap of history if it were not for the participation of one of the most infamous music groups of all time. Back in 1981, Austin scenster Neil Ruttenberg (aka the Rev. Neil X) directed a 20 minute horror short entitled Mask of Sarnath. This  student film combines a Z-movie Larry Buchanan-esque plot of the repercussions of stealing a demonic mask with the grotty realism of the No Wave Cinema of Transgression. What separates Mask of Sarnath from hundreds of other homemade horror flicks is the soundtrack provided by industrial music gods Throbbing Gristle. TG’s droning, ominous electronic soundscape elevates the film into the realm of the truly unsettling. Legend has it that Ruttenberg was a connoisseur of outre music and wrote to TG member and noted raconteur Genesis P. Orridge asking for music for his film. Incredibly, Genesis responded, sending Ruttenberg a brilliant score for his occult themed film. While this story sounds like the ultimate marriage of sound and vision, its curious that TG’s official discography and website makes no mention of this work. Regardless of who did the soundtrack, its the perfect accompaniment for the bizarre amalgam of slasher and supernatural that is Mask of Sarnath. The film is only available in two parts on Youtube but here’s hoping for a deluxe dvd/cd release in the near future.