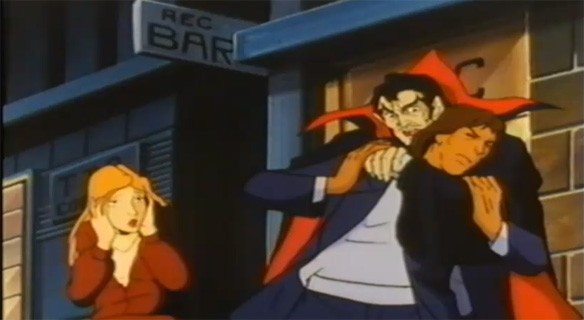 Obscure Horror Cinema: Dracula: Sovereign of the Damned (aka Tomb of Dracula)

This week’s Obscure Horror Cinema entry is Dracula: Sovereign of the Damned (aka Tomb of Dracula). Based on Marvel Comics brilliant Tomb of Dracula, Toei Studios/Harmony Gold produced a feature length animated version of the comic book series that follows Dr Quincy Harker and Rachel Van Helsing’s quest to destroy the king of the vampires. Toei Studios had entered into a partnership with Marvel to produce live action and animated shows in Japan resulting in ultra cool versions of Spiderman, Frankenstein, and Dracula. Harmony Gold was responsible for bringing classic anime such as Robotech, Lensman, Gatchaman, Dragon Ball, and Captain Harlock to American audiences for the first time and had high hopes that Dracula would be the next big Japanimation series to be imported to the US. Unfortunately, the film never really found its audience and was only aired briefly on US cable channels in 1983 and then disappeared. Never appearing on DVD in the US but resurrected by the internet, check out Dracula: Sovereign of the Damned!