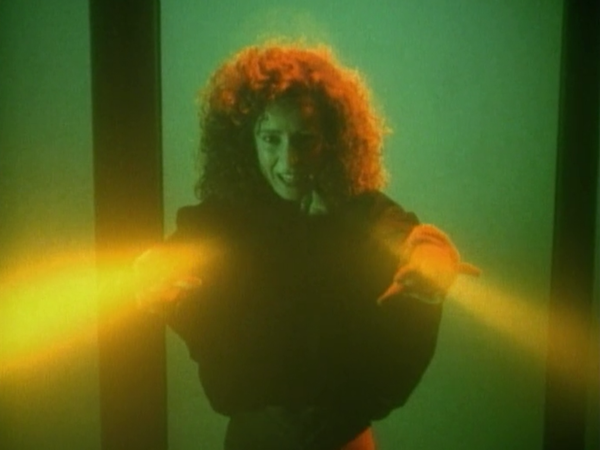 The cinematic progeny of Dario Argento have been plentiful but the two most important, the Romulus and Remus of third wave Italian horror are Micheale Soavi and Luigi Cozzi.  Both of these directors took their mentor’s wild abandonment of the genre’s rules and carved out their own horror legacies.  Soavi would make some of the most stylish fantatstique films of the late 80’s/early 90’s, sometimes even out Argento-ing the master. Stagefright, The Church, The Sect, and Dellamorte Dellamore represent an impressive body of work and are justification for putting a Soavi statue in the pantheon of Italian horror greats. Luigi Cozzi, on the other hand, is the lovable, goofy, mess-up, Fredo to Soavi’s Michael Corleone that lives in the shadow of his more talented compadre.  That’s not to say that Cozzi is a bad filmmaker, but his idiosyncratic style is miles away from the poetic savagery of Soavi. Cozzi’s career started with assisting Argento on his 1973 giallo Four Flies on Grey Velvet, and he started his own directing resume with two episodes of Argento’s Door into Darkness TV series. Cozzi graduated to making such off the wall classics as The Killer Must Kill Again, Starcrash, Contamination, Hercules 1 and 2 (with Lou Ferringno), and perhaps his weirdest project, a re-edited and colorized version of Ishiro Honda’s epochal Godzilla.  Cozzi got his chance to add to his mentor’s mythos with Demons 6: De Profundis. (Despite the title, Demons 6 has nothing to do with the Argento produced/Lamberto Bava directed series).  Luigi decided to finish Argento’s infamous occult trilogy with his own take on the Three Mothers, decades before Argento would get around to it in 2007’s Mother of Tears. De Profundis is a self-reflexive film as we witness the actual preparation and filming of the final chapter of the Three Mothers trilogy.  Trying to make the film as authentic as possible, a director explores the mythology of the Three Mothers and discovers that the witches are not just figments of Argento and De Quincy’s imaginations, but are real and are going to wreak havoc on anyone who brings the truth of their existence to a wider audience.  De Profundis is a film that wildly vacillates between your typical Italian gore set pieces and then ambient, languid shots of outer space and a star fetus waiting to be born. Cozzi’s film is all over the place, but it is insanely entertaining and thoroughly unpredictable, two things that critics of Argento’s Mother of Tears would not say about the Maestro’s own concluding chapter of the triptych.  The soundtrack is hair metal dreck and poor Goblin imitations, but the presence of underrated genre actress Caroline Munro more than makes up for any aesthetic shortcomings. Nowadays, Cozzi is the sole employee/curator of Argento’s store/museum Profundo Rosso. Stop in and say hi the next time you are in Roma.
https://www.youtube.com/watch?v=2mvwNIlfP8A
Share FacebookTwitterRedditEmail