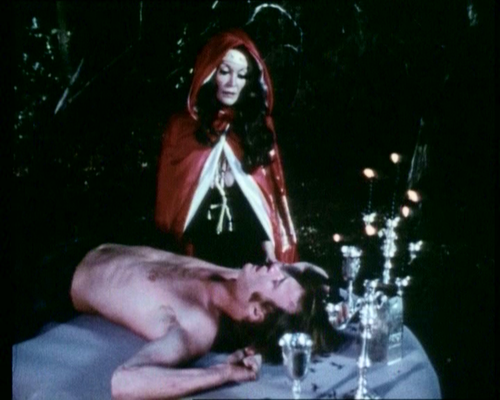 Imagine if Charles Manson’s megalomania had led him to become a horror film director rather than a sociopathic prophet of Helter Skelter.  His cast could have been the Family, his sets Spahn Ranch and Death Valley, his soundtrack composed by himself and Bobby Beausoleil.  No doubt the subject matter would have been something “witchy,” as the Manson girls were known as the “’the Witches of Mendocino” and the Family’s drug induced orgies were about as close to a real Black Mass as you could get. Alas, Charlie chose a murderous, messianic way, but if you ever want to see what a Manson helmed horror movie would have been like, look no further than Brianne Murphy’s Blood Sabbath.  Blood Sabbath is the story of David (Anthony Geary, who was one of the focal points for the bizarre 80’s “Luke and Laura” hysteria), a returning Vietnam vet who falls in love with Yyalah, the mysterious Lady of the Lake.  Yyalah can’t love anyone with a soul, so David plans on giving his soul to the evil Alotta (Ilsa herself, Dyanne Thorne), the leader of a coven of witches who demands sacrifices from the surrounding village. David must partake in a blood ritual that not only costs him his soul but his will as well.  Blood Sabbath is over the top in every way possible: overwrought performances, frenzied rituals, naked frolics,  acid rock, flashbacks, fever dreams, hallucinations, freak outs, everything a post 1960’s occult psychedelic film should be. Coming down from the high of the hippie dream, Blood Sabbath is the aftermath of too much free love, too many drugs, too much mind expansion, too fast, too soon. Brianne Murphy’s direction looks like Kenneth Anger’s home movies, bringing together Wiccan mysteries and sleazy exploitative frugging in equal measures (this is the type of movie I could see Electric Wizard projecting behind them as they play).  And I’ll be damned if the “actresses” in Blood Sabbath don’t look like Squeaky, Sadie, Sandy, Leslie, Katie, Gypsy, Mary, and Ouisch.