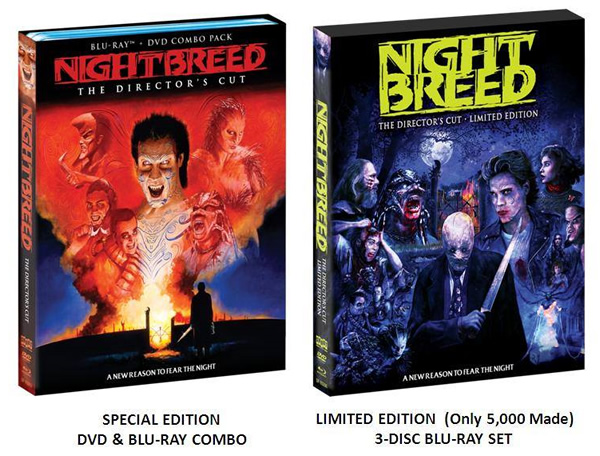 In collaboration with Morgan Creek Productions and Clive Barker’s Seraphim, Inc., the long-awaited NIGHTBREED: THE DIRECTOR’S CUT is scheduled for a release of October 28th and will be available in two retail versions: A 5,000 Unit Limited-Edition 3-Disc Blu-ray™ set and a Special Edition DVD & Blu-ray™ Combo.

In 1990, the film was released theatrically nationwide. However, the movie studio edited the film extensively and several scenes were excised or rearranged – much to Director Clive Barker’s disappointment. Since then, a fan-driven movement was created (www.OccupyMidian.com) to see the full version of the film restored and re-released. Now, after 25 years, fans and horror enthusiasts can finally experience NIGHTBREED like never before! Scream Factory, in conjunction with Warner Bros., was able to find the long-thought-missing original film elements and combed through over 600 boxes to locate not only the lost scenes but a treasure trove of never-before-seen footage as well. With nearly an hour of lost footage meticulously restored, the result is not only a more faithful adaptation of Clive Barker’s book Cabal, but also what he originally intended NIGHTBREED to be.

Official statement from Clive Barker: “This is film history and beyond my wildest dreams of realization. When Scream Factory told me that they found the NIGHTBREED film footage I was gob-smacked! This is the ultimate validation of choices made by myself and Mark Miller [of Seraphim Films] all the way back in 2008. As we embarked down the road of attempting to track down the lost footage, we looked at each other and said, ‘Maybe one day they’ll find it.’ It’s my pleasure to announce that the day has come. Speaking personally, I didn’t allow myself to believe that it would. Even if we did find some footage (which we did in 2009 in the form of heavily degraded VHS tapes) and even if we did find a company willing to release the film (which we did in 2013 with Scream Factory, God bless them) the prospect of finding the actual lost film materials was remoter than I’d wanted to admit out loud. If the footage could not be found by those who had worked closest on it the same year it had been released, then what were the odds we’d be able to find anything 20 years on? But Scream Factory, in their commendable determination, kept up the search and thanks to them total reconstruction has been made a possibility. There’s never been a reconstruction that’s had as little chance of succeeding and yet has succeeded on as many fronts as this film has. It’s unprecedented. To now have a movie that we can put together in the way that I fully intended it to be seen when I first set out to make this film in 1989 is extraordinary. The project has moved inexorably to this conclusion. Fate and the hard work of individuals such as Mark Miller, Russell Cherrington, Phil and Sarah Stokes, Occupy Midian, Morgan Creek, and ultimately, Scream Factory have made this a possibility and I could not be happier.”

Details on the two retail sets are as follows:

**NOTE: Those who order the Limited Edition set directly from www.ScreamfactoryDVD.com will also receive an exclusive 18”x24” poster of the newly designed artwork (available while supplies last)! The Scream Factory site will also receive the first 1,000 numbered copies and ship 2 weeks earlier than Oct 28th.**