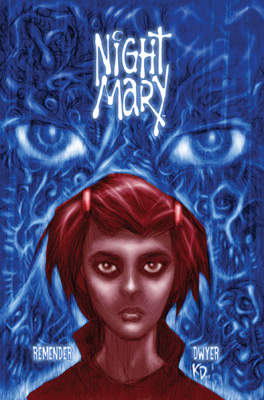 John Pogue, who wrote and directed the recently released film, The Quiet Ones, has been tapped to write and direct the pilot.

“We love genre at UCP and thankfully so do audiences. We’ve made it a priority to seek out great properties that will attract equally great creators to adapt them,” said Dawn Olmstead, Executive Vice President, Development, Universal Cable Productions. “The dark and suspenseful world of ‘Night Mary’ gives us a great landscape to work from and has a lot of promise to deeply immerse fans.”

“Remender and Dwyer’s Night Mary is a shockingly inventive and ingenious story with mind-bending potential,” said Pogue. “And I’m thrilled to be collaborating with UCP, IDW and Circle to bring this to television. Night Mary explores the next frontier-the human brain-through the dark adventures of a lucid dreamer, and what happens when conspiratorial elements attempt to turn our reality into a living nightmare.”

Based on the acclaimed IDW Publishing graphic novel, Night Mary follows a young woman trained to be a lucid dreamer. Her father owns a sleep disorder clinic where she enters the dreams of his patients. When a patient is revealed to be a serial killer, she is placed in jeopardy as nightmares and reality become frighteningly intertwined.

“Of my creator-owned projects, Night Mary has always held a special place, definitely the best thing Kieron Dwyer and I created together,” said Rick Remender. “It’s very gratifying to see it finding new footing as a television series, ten years after its initial publication, and with such a skilled team at the helm.”

Ted Adams and David Ozer from IDW Entertainment and David Alpert and Rick Jacobs from Circle of Confusion (The Walking Dead) will serve as executive producers.