Cinematic horror icon Jason Vorhees is about to GET IN THE CAGE!  According to a recent interview with Entertainment Weekly, Oscar-winning thespian Nicolas Cage admits that he based his character from the upcoming film Mandy on the legendary (and impossible-to-kill) campground slasher.  It is not yet known if the producers of the Friday the 13th franchise are flattered or enraged by the actor’s revelation.

Cage will play a lumberjack named Red in the revenge thriller, which is due out on September 14th.  A mild-mannered every-man for the first half of the film, Red turns into a homicidal vigilante in the second half when his remote cabin is the scene of a home invasion which sees his lover (Mandy) fall victim to the violence.  Red blazes a path of vengeance amped-up by a liquid hallucinogen as he hunts down his tormentors.  It’s well-worn territory (Crank, Death Sentence, the entire Death Wish series), but Cage’s indication that he’s channeling his inner-psycho for the role adds a nicely-textured layer of horror and the supernatural to the entire equation.

“It was a good chance to go through a narrative and have a transformation of sorts,” Cage tells EW. “Before he drinks that supernatural drug, or whatever it is, his fighting style is more ferocious, is more cat-like and feral.  Whereas after the drug, there’s a transformation where he becomes almost like a golem, the ancient Jewish golem that was a supernatural statue that came to life.  And I think Panos (Cosmatos, director) wanted that, he wanted me to be almost like Jason-esque, you know, from those horror films that were so popular. Panos and I really both decided what the graph of the performance would be. How much more Jason-esque is he there?  Or like a statue there?  We built this both together.”

The jury is still out whether Mandy will actually pay homage to “those horror films that were so popular,” but it’s nice for Jason and the Friday the 13th franchise to get a shout-out nonetheless.

You can view the trailer for Mandy (in theaters on September 14th) below. And as always, keep tuned to HNN for more news on this film and other horror entries as they break! 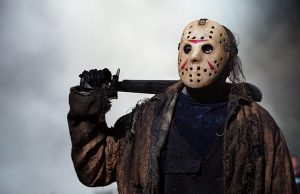 Jason Attacks This July in ‘Friday the 13th’ Board Game

Game night just got a lot bloodier. This is not your father's old, dusty Monopoly, Clue or Life board game. The Op will release the...
Read more

Horror gamers don't have to wait for October and Halloween to indulge in their favorite pastime this year. Microsoft is hosting a special "Un-Halloween Horror...
Read more