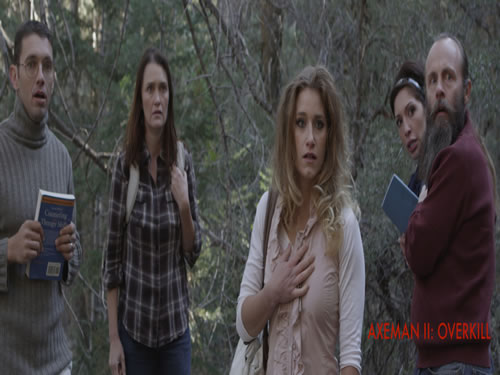 SinningWorks in association with Blood Red Films, the production companies behind AXEMAN 2: OVERKILL, the next installment in 80’s throwback slasher franchise, have released the second round of official film stills for the sequel that promises to deliver in a new chapter in the Axeman At Cutter’s Creek saga with the goal of making it darker, grittier and bloodier than the original.

Two stills include Farrah Abraham in what is sure to be an iconic role in the horror genre.  She stars as “Fanne Rae,” a fanatic evangelical who is hell bent on spreading the word of God, even if it means spilling blood to do so.  In the first still titled “Crazy Christians” she’s performing alongside (from left to right) Edward Gusts, Alisha Seaton, Arielle Hader and Allen Merritt.  In the second still, she’s performing alongside on-screen husband Allen Merritt (Batman: The Dark Knight).

Two more stills feature Rachel Reilly as “Breaker,” a machine gun toting, double-crossing mercenary on the hunt for the bags of cash abandoned in the first installment of the Axeman franchise.