Clear the passing lane–Johnny Blaze is back in the saddle.

Horror fans have been eagerly awaiting–and debating–the future of Ghost Rider in the Marvel Cinematic Universe for months now, but Marvel will first bring back the Spirit of Vengeance in a brand-new comic this week. Check out the dramatic cover (by Kael Ngu) and interior art for the premier issue–courtesy of cbr.com–on this page.

Ghost Rider No. 1–as first reported here in Horror News Network late last year–will hit stands this Wednesday, Feb. 23, the start of a new series that will take a “back-to-basics” approach to the supernatural anti-hero. It looks like, from the sneak peek here, that Johnny Blaze is back…with a vengeance.

The new 32-page comic–from writer Benjamin Percy, artist Cory Smith, colorist Bryan Valenza and letterer Travis Lanham–will return to Blaze’s roots–with a twist. This time, Percy said, Johnny bears a strange scar on his head, and “no longer has control over the Spirit of Vengeance. And, when possessed, he has no memory of what’s transpired.”

In this storyline, Johnny Blaze has apparently settled down–with a wife, two children and a job at a local auto repair shop. But Johnny has problems, according to the official synopsis. “He has nightmares of monsters while he sleeps, and he sees bloody visions when he’s awake.”

The Marvel Comics character of Ghost Rider–created by Gary Friedrich, Roy Thomas and Mike Ploog–first appeared in Marvel Spotlight No. 5 (1972), and eventually earned his own series that ran from 1972-1983.

The story then dealt with stunt motorcyclist Johnny Blaze saving his father’s life by giving his soul to Satan (later revealed to be the demon Mephisto). After this bad bargain, Blaze transformed into an avenging demon (with flaming skull and fiery motorcycle) at night or when around evil . 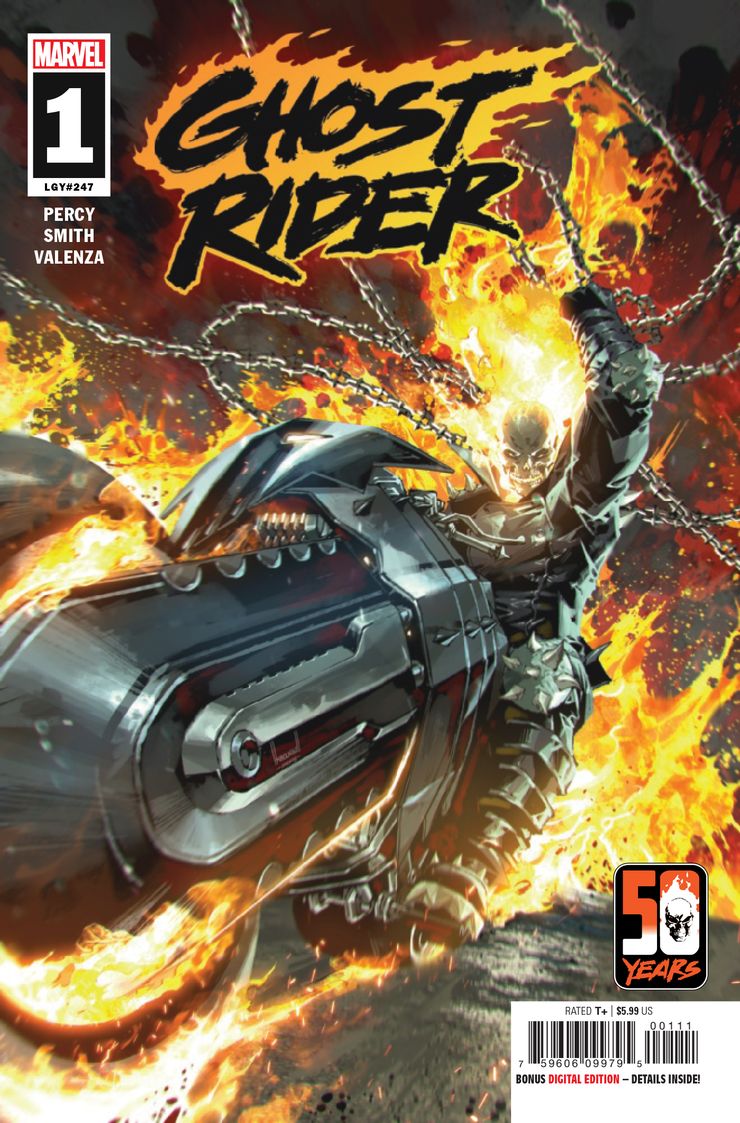 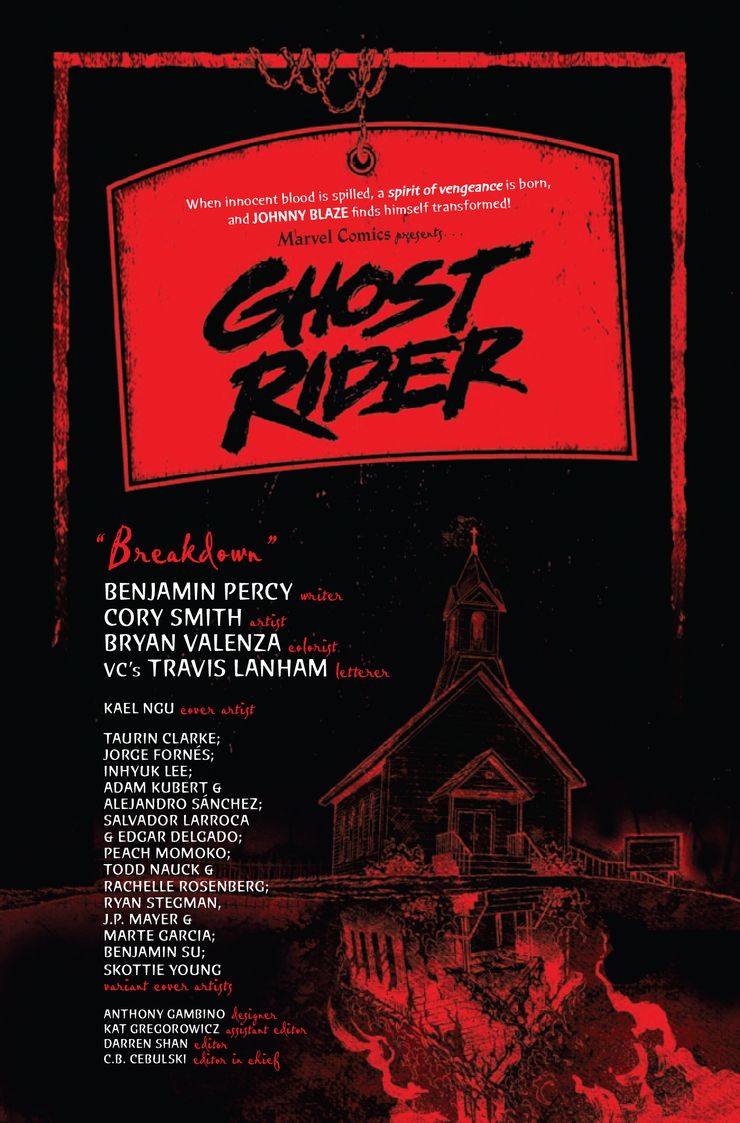 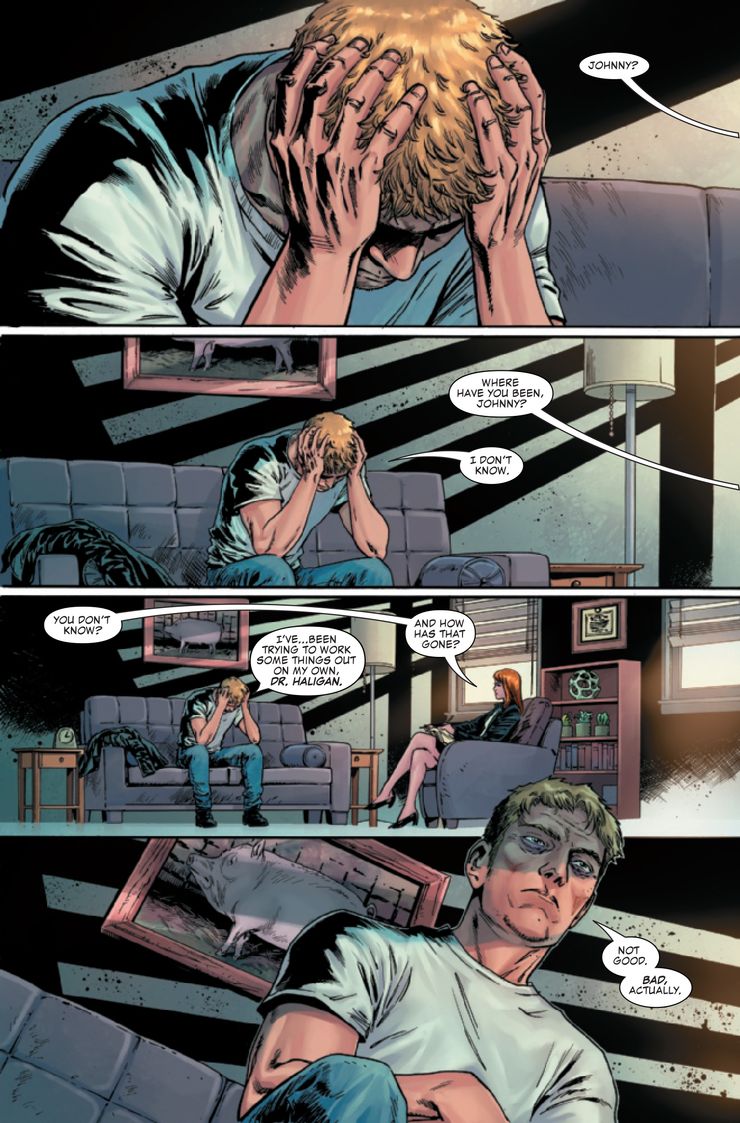 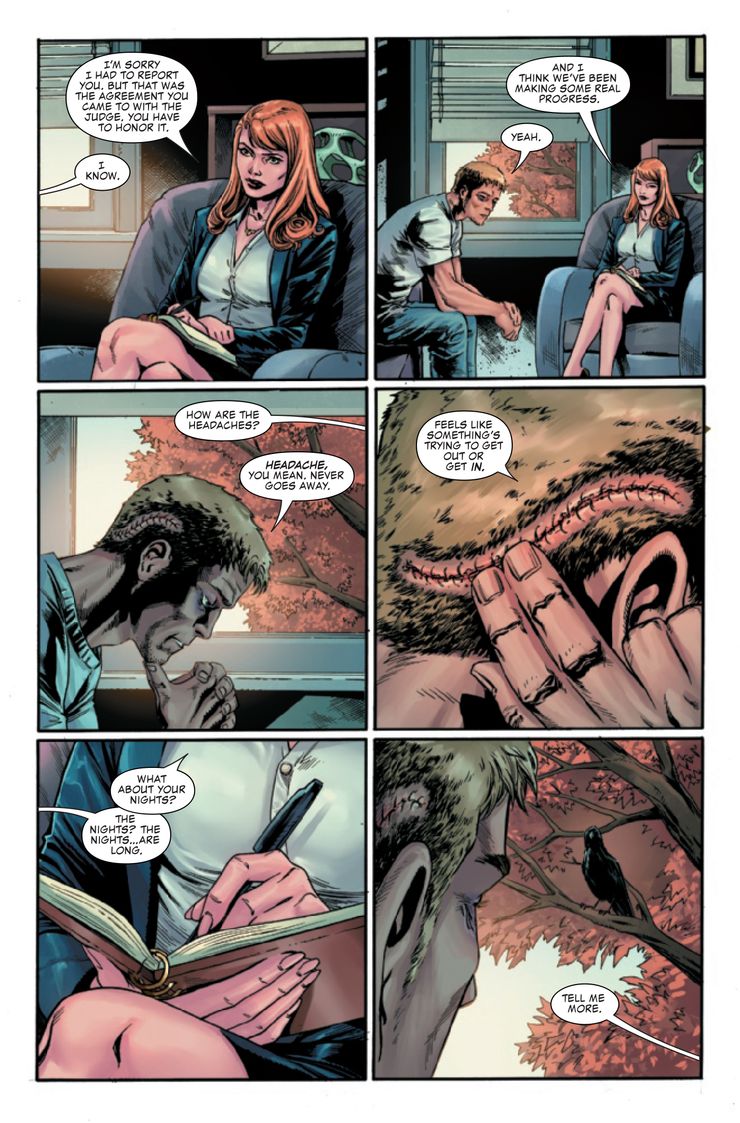 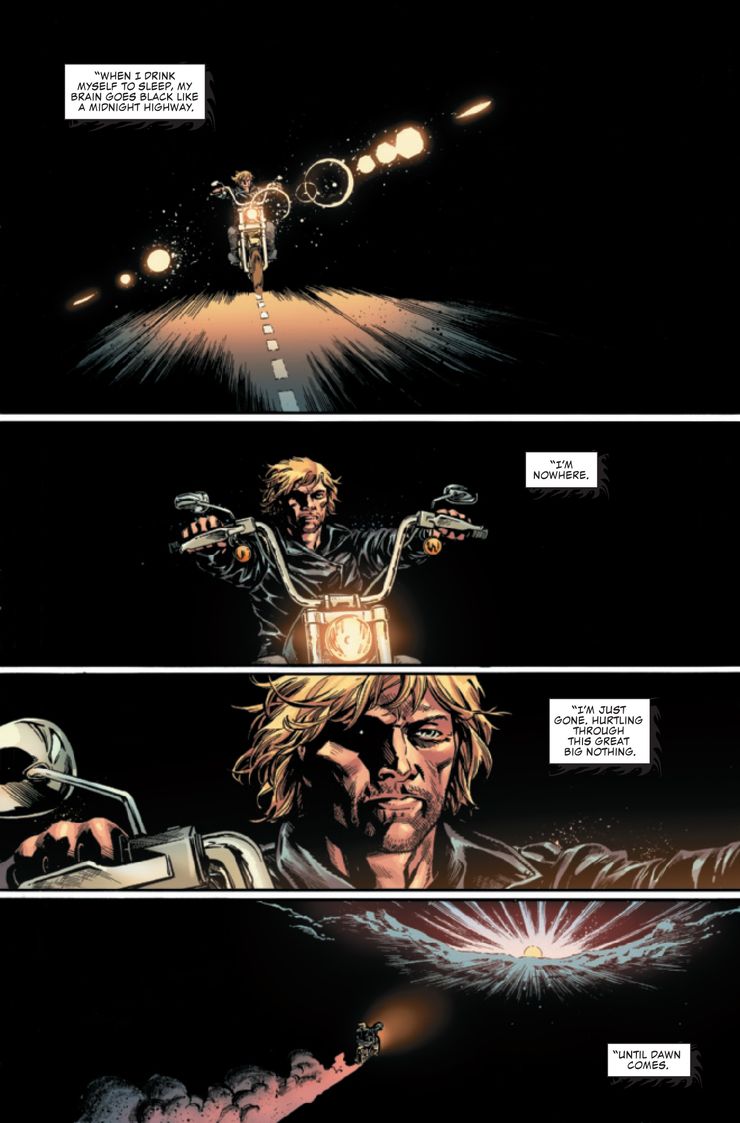 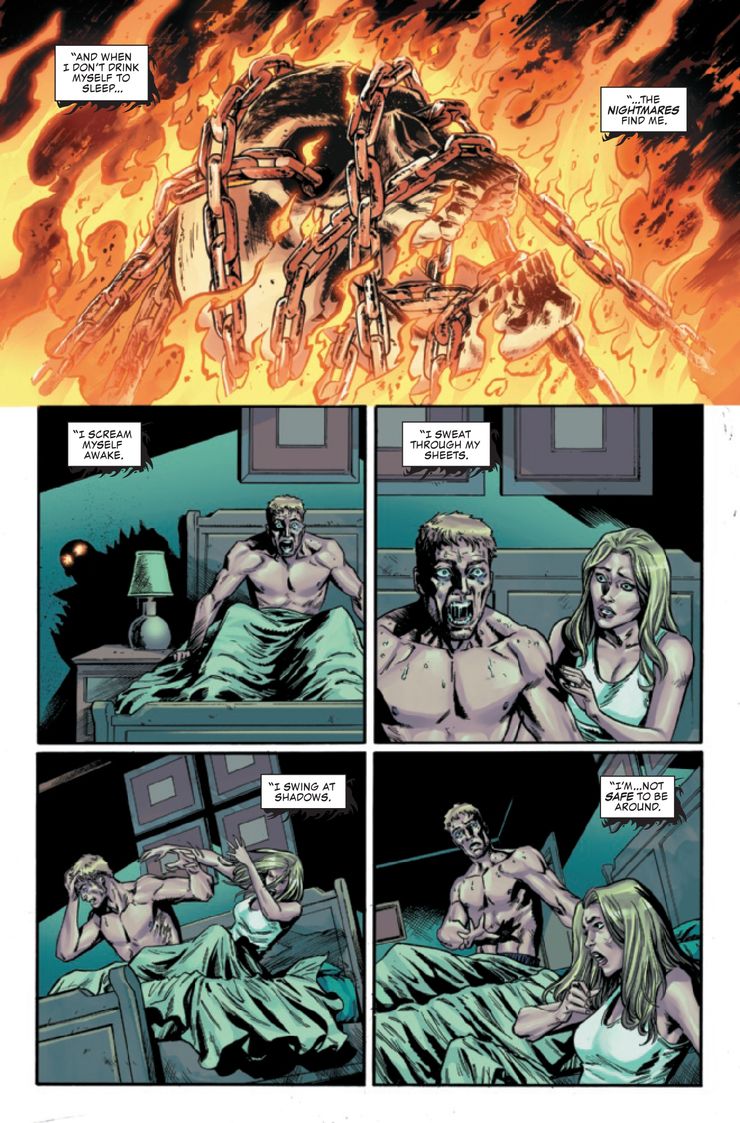 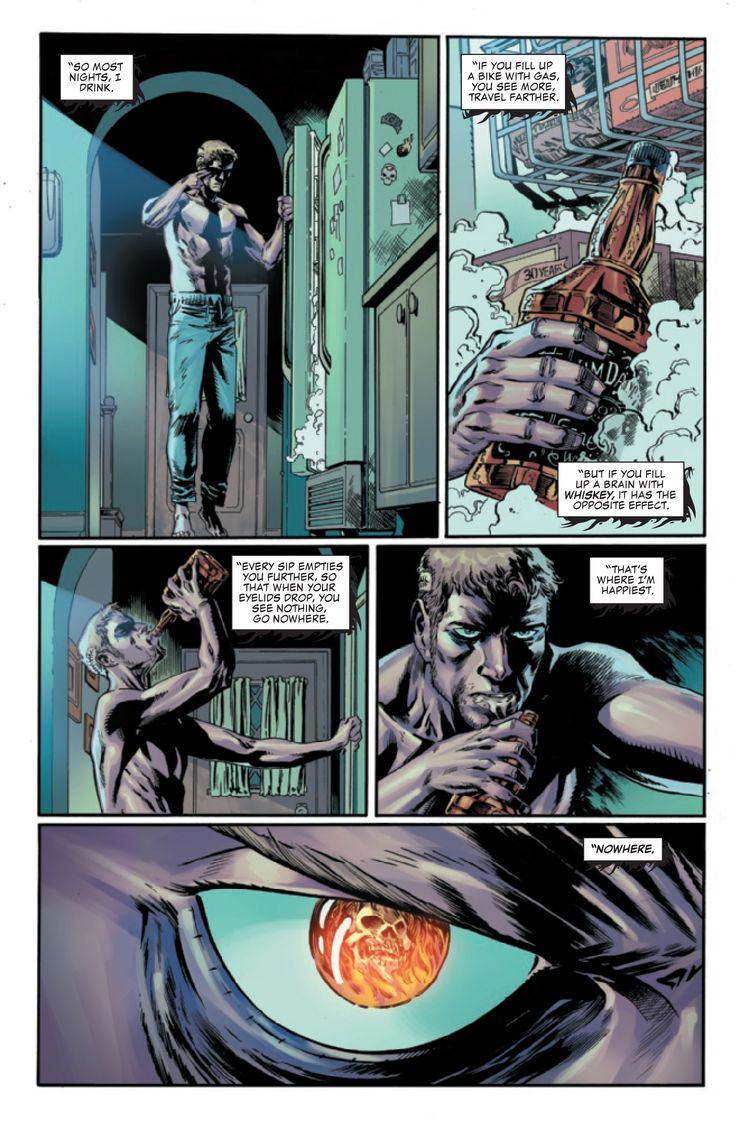