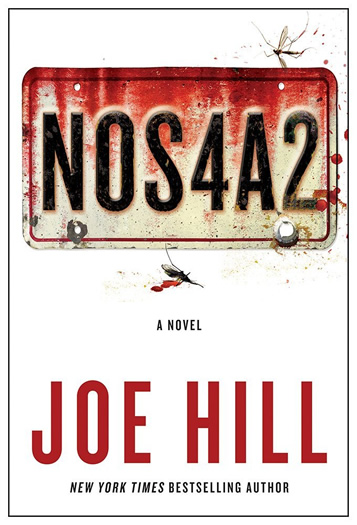 Synopsis: Victoria McQueen has a secret gift for finding things: a misplaced bracelet, a missing photograph, answers to unanswerable questions. On her Raleigh Tuff Burner bike, she makes her way to a rickety covered bridge that, within moments, takes her wherever she needs to go, whether it’s across Massachusetts or across the country.
Charles Talent Manx has a way with children. He likes to take them for rides in his 1938 Rolls-Royce Wraith with the NOS4A2 vanity plate. With his old car, he can slip right out of the everyday world, and onto the hidden roads that transport them to an astonishing – and terrifying – playground of amusements he calls “Christmasland.”

Then, one day, Vic goes looking for trouble—and finds Manx. That was a lifetime ago. Now Vic, the only kid to ever escape Manx’s unmitigated evil, is all grown up and desperate to forget. But Charlie Manx never stopped thinking about Victoria McQueen. He’s on the road again and he’s picked up a new passenger: Vic’s own son.

Our Thoughts: Let me start off by saying I am a Joe Hill fan. I love his work. I daresay he's one of the best new writers of the horror genre. Whether it's a novel, a short story, or a comic book, Joe has quite the knack for sucking in his reader. He knows his audience, and he plays to them.

I had high expectations for NOS4A2. The book did not disappoint.

I think the smartest and most enticing aspect of the book is how it's written. Most of the chapters end in the middle of a sentence, making the reader go on to the next chapter to see how the sentence ends. That's clever. It got to the point that I couldn't put the book down until I finished an entire section because of this little writing genius. Well done, Joe. This gives the whole "page-turner" label a whole new meaning.

The title is equally as clever. Vanity plates are usually fun to decipher. It gives you some insight into who's being the wheel. Here we have a 1938 Rolls Royce Wraith, in and of itself, quite a character for a book. The vanity plates give it the perfect finishing touches and makes the reader wonder if there's really a vampire at work here. Is that what the story is about? Are we looking at Dracula revamped? I guess you could say that, but you'll have to read to really find out how much deeper it goes.

Character development is one of Hill's strong suits. Every character introduced is fleshed out well. There are no small parts in his novels. Each person is an important piece to the puzzle. What I love best, especially in this novel, is how he makes Vic, the protagonist of the story, well, unlikable. You start off really digging her story, wondering what kind of woman she'll grow up to be. Then when she reaches adulthood, you find her nickname, The Brat, fits her really, really well. And even though you may not like who she is or you find her actions to be questionable, still, you root for her. Other characters, like her parents, Lou, Tabitha, Wayne, and Maggie don't really even take a backseat to Vic. You root for them too, maybe even when you think you shouldn't or don't want to. I think that's one of the most difficult tasks as a writer, and Hill is always up to the challenge.

And I have to give props to the man sneaking in little nods to his own friends and family. They're small, but they're there. His father, Stephen King, is referenced a few times in the book, one pertaining to Mid-World and the other to Derry and Pennywise's Circus. Connecting Christmasland in this book to The Dark Tower series is both fun and genius. In addition, Hill gives mention to Twitter, Neil Gaiman (Coraline), and Amanda Palmer within NOS4A2's pages, which, if you follow Hill on Twitter, you know he has interaction with this famous couple on a frequent basis. He even references one of his own novels, Heart Shaped Box. It's something I've always liked about King's work, making current media mentions within a novel's pages, and I'm glad Hill carries on that tradition. As a geek, I think it's cool, and I love looking for them.

That being said, Joe Hill is not Stephen King. They may write within the same genre, but they do not write alike. I've been a King fan for nearly 20 years. I picked up Hill's Heart Shaped Box when it was first published in 2007 without knowing he was related to King. Truth be told, I bought it because it shared a title with a Nirvana song. Since then, I've read 20th Century Ghosts and Horns as well. I've also read ever piece of fiction written by King (except the newest pulp fiction novel, Joyland; I'm on the waiting list for it at my library). And I will say this: I think Hill is a better writer. Why? Because his endings are better. It's just my opinion, and you may care to argue with me on it. So be it. I'll always be a King fan, but "the hand of God" and "a giant bug" killed the endings for me for a couple of his books. I'd say that's a spoiler alert, but really, without context, you'd have no idea what I was talking about anyway.

Enough about King. Back to Hill and NOS4A2. Buy it. Read it. Enjoy it. The end.