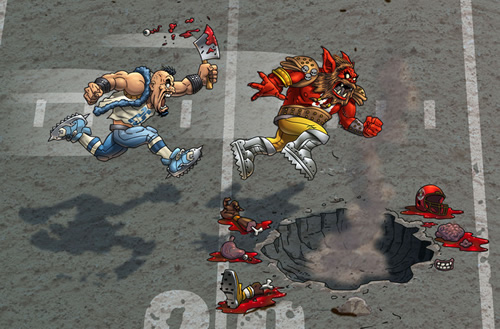 An all-star team of talent has been assembled to breathe new life into one of the video game industry’s most beloved, and downright brutal, sports-hybrid genres. Michael Mendheim, the original creator and lead designer of Mutant League, is initiating a Kickstarter effort for a new video game entitled Mutant Football League™. With fan support, and a successful Kickstarter campaign, Mendheim is planning to release his Mutant Football League game on Xbox LIVE, as well as on iOS and Android tablets.

The original Mutant League video game was released in 1993 for the Sega Genesis. The combination of monsters, mayhem, and good ol’ American team sports turned the game into a cult classic.

“It’s the 20th anniversary of the original game, so this is an ideal time to release a new over-the-top football game featuring monsters and mutants for the many fans who have been clamoring for it,” stated Mendheim. “The fans have kept their interest in this genre alive over the years and we want to reward them for their loyalty. We will be creating a new and very different game that pays homage to classic monster sports games and parodies the owners, the coaches, the sponsors and everything else that makes football such a great American sport.”

An all-star team of art and writing talent culled from the gaming, comic book and animation industries have been assembled to form the Mutant Football League roster:

Mutant Football League will be a great-playing action football game with deep strategy, bone-crunching hits, over-the-top gore, a graveyard full of tongue-through-cheek humor, and a mind-blowing roster of original customizable characters, environments, and gameplay features and options, including:

A cornucopia of great Mutant Football League merchandise and one-of-a-kind items are available to backers of the project, including MFL trading cards, exclusive in-game codes, limited edition hardcover MFL Art of the Game Books, and entrance to the special MFL Launch Party in Chicago (home of Da Bears!).