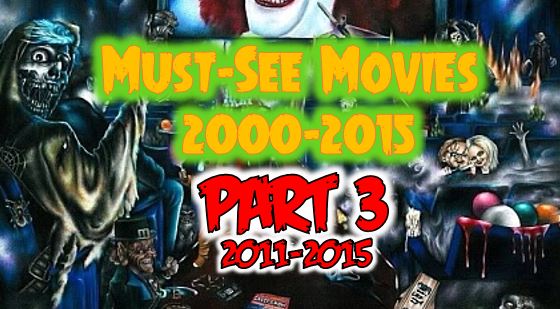 If you’ve missed any, here are links to parts 1 and 2:

The Human Centipede 2 (2011)
While the first part of this trilogy did not live up to its hype, the second part far exceeded it. Aside from the sheer grossness of it, Laurence Harvey’s brilliant performance catapults this to a must-see film.

A Serbian Film (2011)
Listen, I held off on watching this for years and watched it quite recently. It may be one of the sickest films I’ve ever seen. It makes this list because if you want to be disturbed and grossed out, this is a “must-see”.

Hobo with a Shotgun (2011)
This started off as a fake trailer during Grindhouse and then turned into a real movie starring Rutger Hauer as a hobo delivering some bloody justice in Scum Town.

Red State (2011)
Totally overlooked Kevin Smith film about a Westboro Baptist Church-type organization who hole themselves up and go Waco. Check it out.

The Woman (2011)
A lawyer and his family fin and kidnap a feral woman. It’s like Jodie Foster in Nell…only a lot more violent.

Midnight Son (2011)
Another entry into the awesome twists on the vampire genre. This one flew completely under the radar but should be watched if you can find it.

Kill List (2011)
I usually shun the use of the word “dope” (especially post-1999) but this movie was dope! Sick little British film about former soldiers turned contract killers.

American Mary (2012)
Top notch. Easily one of my favorite films of the past twenty years. Fantastic directing by the Soska’s and a killer job by both Katharine Isabelle and Tristan Risk.

The Cabin in the Woods (2012)
Again, my distaste for bid-budget horror would usually keep this off of the list but there is one problem…I fucking loved this movie. Such a fun story and the elevator scene is classic.

Excision (2012)
Wow…what a mindfuck this movie is. AnnaLynne McCord deserved an Oscar for her portrayal of the main character Pauline.

John Dies at the End (2012)
Speaking of mindfucks…my friend Mike from work has been berating me endlessly for months because I told him that I owned this on BluRay but have yet to watch it. Well, I finally gave in to the beatings and slipped this bad boy in. Wow, this is truly a Don Coscarelli film. Gory, chaotic, trippy, funny, John Dies at the End has it all and I’m sorry that I missed out on in for so many years.

Maniac (2012)
Like big-budget films, I normally have an issue with remakes…a really big issue. Sometimes, however, a remake will come out that will make me rethink my loathing for them. The Hills Have Eyes was one and so is Maniac starring Elijah Wood. While the definitely made significant differences between the 1980 original and this one, it still has the same ultra-creepy feel and Wood is fantastic.

Sinister (2012)
Another big-budget film that made my list. Not many films actually scare me, but home invasion and haunted house movies do because they can seem a bit too real to me.

Hate Crime (2012)
James Cullen Bressack really packed a punch with this fucked up story about a Jewish family who’s home is invaded by some Nazi coke-heads who like to rape, kill and videotape their shenanigans.

The Snowtown Murders (2012)
What a fucking bleak shitshow. But I’ll bet you can’t turn it off.

Stitches (2012)
A clown comes back to life to exact his revenge on a group of kids who accidentally killed him. Great kill scenes.

Tiktik: The Aswang Chronicles (2012)
From the Philippines comes this sort of weird, violent yet fun movie about the aswang, a vampire-like creature from Filipino legend. A very interesting movie.

Chained (2012)
I always dig a good serial killer and when you throw in one of my favorite actors, Vincent D’Onofrio as the killer, I’m in. Check it out.

The Conjuring (2013)
Big-budget strikes again! I saw this one by myself in a theater at like midnight. You bet your ass I turned on all the lights in my house when I got home. The scares don’t all translate to the home viewing but it’s still good.

Evil Dead (2013)
Another damned remake on my list? No, I actually don’t consider this to be a remake, I feel like it’s a sequel. It’s a whole new cast of characters with their own story that stumble across the Book of the Dead (why do people feel the need to read from it?). Anyway, it had a few issues but I dug this telling and it was bloody as hell.

Would You Rather (2013)
This is a fun movie. Starring Jeffrey Combs, Brittany Snow and Sasha Grey, a group of folks is coerced into playing a rather fucked up game of “would you rather”.

Under the Skin (2013)
Is it sci-fi? is it horror? I have no idea. I’m not ashamed to say that I had to watch this twice because I found it hard to follow the first time (not the film’s fault). In the end, I can say that this is really a gorgeous film that should be seen by all.

Only Lovers Left Alive (2013)
Tilda Swinton is truly a goddess. Is this horror? Ehh..maybe not. But they’re vampires and it’s a fucking hell of a movie.

The Babadook (2014)
This super-creepy film happens to be my four-year old daughter’s favorite movie. Of course, she doesn’t get the psychological aspect of it but when you do, I’m sure you’ll love it as well.

Bag Boy Lover Boy (2014)
This was recommended to me by my man Jay Kay from Horror Happens Radio. This underwhelming nerdy type runs a hot dog cart in Manhattan and is asked to pose for pictures by a fetish photographer. If that isn’t enough to make you want to see this shit, I don’t know what is.

Housebound (2014)
Morgana O’Reilly knocks it out of the park in this New Zealand film that I’m really hoping you’ve already seen. If you haven’t, please feel free to get your head out of your ass, it’s not a hat.

A Girl Walks Home Alone at Night (2014)
I’m not sure I’ve ever seen a Persian film before but this one was recommended to me and I’m glad I saw it. There’s shady drug dealers and a vampire in this very artsy and slow-moving, yet very interesting film. Definitely one to check out.

Starry Eyes (2014)
What will the lead girl do to make it big in Hollywood? Why don’t you watch and find out. Reminded me of Contracted in some [places (not a bad thing).

Tusk (2014)
People either love or despise this film; I loved it. A lot of folks seem to miss Kevin Smith’s tongue-in-cheek humor. This film is chock full of his ridiculousness and features an amazing performance by Michael Parks.

Big Bad Wolves (2014)
Outstanding movie about a suspected child molester and murderer who is kidnapped by the father of one of his victim’s who tries to torture the location of his daughter’s missing head out of him. Sick film out of Israel.

We Are What We Are (2014)
Cannibalism is awesome…okay, not really but this movie is. It’s actually a remake of a 2010 Mexican film but I’ve never seen the original.

Blue Ruin (2014)
Yes, yes and all the yes. I fucking loved this movie so much. This film was funded by Kickstarter and is so genius. A homeless guy decided to take revenge on the person who murdered his parents but is entirely inept. Keep a look out for Buzz from Home Alone and Jan from the Brady Bunch.

Clown (2014)
Another clown movie? Sure, why not. If you already have a fear of clowns, this film will not help to alleviate them. Also, if you ever have the desire to try on a clown suit, this movie will probably put an end to it. Enjoy.

13 Sins (2014)
I saw this one totally by accident and really dug it. This is a remake of a Thai film called 13 Beloved but I’ve never seen it. A normal guy with normal money problems gets a call from a guy saying he’ll give him a grand to kill a fly. The guy does it and the money is credited to his bank account. Believe me when I say the tasks (sins) get harder.

Contracted (2014)
Really, really good zombie/infected flick about a girl who gets raped by a dude who earlier raped an infected corpse. It’s a wacky world we live in, kids.

The Taking of Deboarah Logan (2014)
While not normally a fan of the “found footage” genre, The Taking of Deborah Logan gets it done in such a great way. What starts off as a documentary about an older woman dealing with Alzheimer’s turns into something way different.

What We Do In The Shadows (2014)
Written and directed by the hysterical Jemaine Clement (along with Taika Waititi), this New Zealand mockumentary is about a group of vampires living together in modern times and the hilarity that ensues when they get a new member.

Wyrmwood (2014)
Clever Mad Max-ish zombie film straight out of Australia. Bianca Bradey steals the show as a girl who can telepathically control zombies.

Deathgasm (2015)
Do you like metal? How about gore? If you said yes, you’re in for a treat. A couple of metalheads form a band called Deathgasm and they come across some sheet music that, when played, summons a demon. ‘Nuff said.

The Visit (2015)
Who knew that M. Night Shyamalan could still make a quality film? I didn’t think he had it in him but this movie really packs a punch. I figured out his signature twist pretty early on but it didn’t ruin the movie at all; that’s saying something.

It Follows (2015)
Awesomely tense film about the dangers of teen sex and how it can cause you to be killed by a semi-invisible murderer.

Goodnight Mommy (2015)
This was my pick for top film of 2015. This German film is very dark and depressing but really kept me wanting more and it delivered at the close.

There you have it kids. My list of 111 “must-see” films from 2000-2015. I hope you enjoyed it and please let me know if you think I missed anything; I’m always looking for good recommendations!