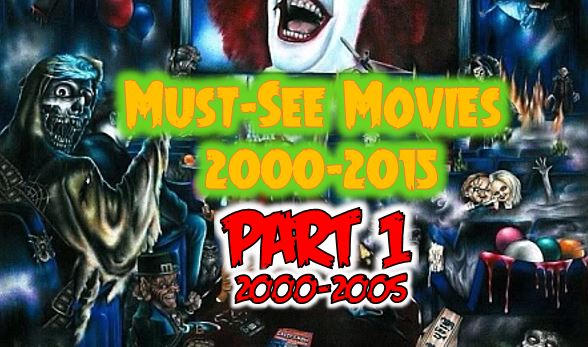 Lately I’ve seen a lot of cool lists discussing people’s favorite movies of the 2000’s so far. As a matter of fact, our friend Jay Kay from the Horror Happens Radio Show did an awesome list of his top 103 from the past 15 years. All of this got me psyched to do my own list so I sat down, tried to do it and bombed out in the first twenty minutes; I could not, for the life of me, put my list into any sort of order.

My friend Tony at work suggested I just label them “Must-See” films, so, that said, this list will not be in order of favorites, it will be titles that I think that every horror fan should see. These films are my favorite from the genre (that I saw) for the years covered. I will be releasing this list in a 3-part series titled Must-See Movies. Part One will cover 2000-2005, Part Two will cover 2006-2010 and Part Three will cover 2011-2015.

The list will cover films that were wide releases, hard-to-find indies, American, Japanese, French, psychological, funny, disgustingly brutal and offensive and plenty of other categories. If you decide to watch some from my list and you get offended by brutal films, please ignore the ones that I say are “disturbing”, “fucked up”, “disgusting”, etc. as I will not be held responsible for your precious sensibilities.

So, please, join me in going back 15 years to look at some of my favorites and don’t forget to look out for Part Two coming soon!

American Psycho (2000)
A perfect dissection of pure 80’s capitalism. Oscar-worthy performance by Christian Bale in role of Patrick Bateman. “Do you like Huey Lewis and the News?”

Ginger Snaps (2000)
Katharine Isabelle, how do I love thee? This Canadian werewolf film is definitely worth a look if you’ve missed it.

Battle Royale (2000)
The original Hunger Games. A classroom full of kids are dropped on an island with food, water, a weapon and three days to be the last one standing. Stars Chiaki Kuriyama who played Gogo Yubari Quentin Tarantino’s Kill Bill. Fantastic film.

Audition (2000)
Disturbing…seriously disturbing. It’s like watching someone get a foot cut off with piano wire. Oh, wait…

Frailty (2001)
I saw this in the theater by accident. I went to see something else and the theater was too crowded so I snuck into this without expecting anything. This film still blows me away to this day. What a fucking headtrip. Plus, it has Powers Boothe…always a bonus.

Jeepers Creepers (2001)
Oh, I’ll get some shit for this one but I enjoyed this movie. I’m a Justin Long fan and I thought the creature was great.

Ichi the Killer (2001)
Ichi was, at one point, one the most violent movies I’d ever seen. It’s since moved down some notches but is still a great watch.

Session 9 (2001)
Listen, I don’t normally back anything with David Caruso in it but this psychological thriller and King of New York have my blessing. Seriously, check it out.

August Underground (2001)
We all know that I generally hate the found footage genre but this is one fucked up film. If you’re in the mood to be severely disturbed, give it a go.

28 Days Later (2002)
Fellow Horror News Network site-mate Sean McLaughlin may throw a fit at its inclusion but 28 Days Later remains a favorite of mine. No, Sean…it’s not a zombie movie, but it’s still good.

The Ring (2002)
Oddly, I still have never seen the original 1998 Japanese release of this film but I enjoyed the shit out of the American version. Damned wet kids crawling through televisions.

Cabin Fever (2002)
The first of several Eli Roth films to grace my faves, Cabin Fever is a fun horror film that riffs off of a lot of classics and makes it work. It’s one I’ll still watch once in a while.

May (2002)
This one is definitely a Debbie Downer owner of a film but it will keep your interest.

Ju-on: The Grudge (2002)
I really hate when creepy people crawl around in movies..it seriously freaks me out. Ju-On: The Grudge was a huge hit both in Japan and in America that spawned several American (but inferior) remakes.

The Eye (2002)
Awesome movie out of Hong Kong about a blind girl who receives a pair of donor eyes to see again but she starts seeing stuff that she shouldn’t. This had an unfortunate American remake and was also directly ripped off for a segment in V/H/S 2.

Oldboy (2003)
One of my favorite movies no matter what genre we speak of; if you haven’t seen it, shame on you. Oldboy was remade by Spike Lee but I’ve never seen it.

High Tension (2003)
This was the first of what was dubbed the “New French Extremity” that I saw. Total rip-off of Dean Koontz’s Intensity but still a hell of a nutty movie.

House of 1000 Corpses (2003)
Fellow staffers (especially Sean McLaughlin) will argue but I still think this is Rob Zombie’s best film.

Saw (2004)
The start of James Wan’s brilliant career was with this sick franchise. It definitely went south as it went on but the first few are still gold.

Murder-Set-Pieces (2004)
Great plot? Nope. Amazing acting? No. One of the goriest and most fucked up films I’ve ever seen with some amazingly well done effects? Yes. It’s worth a watch if you’re a twisted fuck.

Shaun of the Dead (2004)
It’s one of those movies that I’ll leave on any time I come across it (just ask my wife.) George Romero himself is a huge fan.

The Descent (2005)
Wow…I saw this one in the theater with my cousin Dave and I think we were holding each other at one point. As if being lost in a cave isn’t scary enough, you have to break out the creepy white LOTR Gollums? Bullshit.

The Devil’s Rejects (2005)
The consensus vote on best Rob Zombie movie; I dig it but I still go with House of 1000 Corpses.

The Exorcism of Emily Rose (2005)
This film definitely did not make a lot of horror film fans favorites lists (say that five times fast) but I have a soft spot for possession films and this (true) story was very captivating; not to mention the incredible performance by Jennifer Carpenter.

Saw II (2005)
My favorite of the franchise. I really loved the back and forth between Jigsaw and Detective Matthews and the storyline really threw me for a loop.

Wolf Creek (2005)
Until Wolf Creek I always thought Australians were like Crocodile Dundee…well, not Mick Taylor. John Jarratt’s portrayal of this psycho Aussie is incredibly creepy. They did a sequel last year which was nowhere as good but Jarratt is so good again that he makes it watchable.