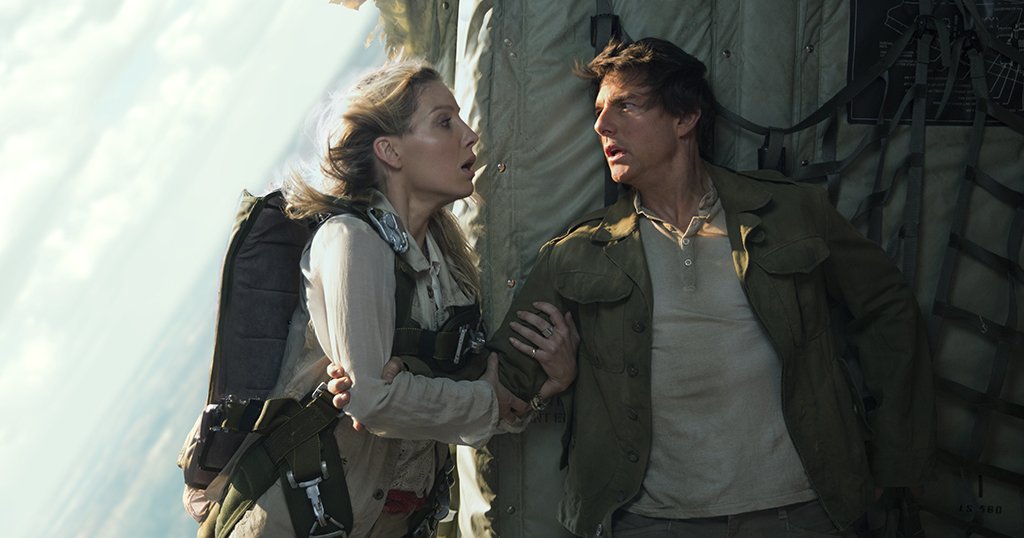 Critics have taken great delight in tearing The Mummy to shreds over the past few weeks. When word dropped of poor early reviews and anticipated disappointing performance at the domestic box office, a pile-on occurred where critics tried to one-up each other with witty insults for the film and its participants. I’m embarrassed to say that I also took part in the public flogging (“Smell something rotten this weekend?”, I mused. “That’s the stench of a sarcophagus that never should have been opened!”) Well, I decided to take advantage of the pleasure of sitting in a big empty theater for a movie that isn’t drawing audiences and check out the flick for myself. To my utter surprise, I didn’t find it to be nearly as bad as I expected based on other critical reviews. In short, I’ve certainly seen worse mummy movies!

Before you tune out, let me tell you what I liked about the movie! I promise I’ll get to what didn’t work shortly. I found the first third of director Alex Kurtzman’s movie to be highly engaging. Sofia Boutella makes an awesome, creepy mummy; and her origin story was nicely presented. The film has a harder edge to it than the Brendan Fraser flicks of yesteryear. Arnold Vosloo’s Imhotep in the 1999 film never achieved the supernatural eerieness that Boutella brings to the role. There was a clear sense of danger attached to her character as well as the atmosphere of the settings which represent and contain her evil.

Being a superfan of the original Universal Monsters Classics, my greatest fear before seeing the film was that it would lack the dreadful gothic atmosphere of the Karl Freund/Boris Karloff classic of 1932. I’m pleased to report that this movie has more of these elements than any of the modern remakes which have come and gone. One of the most interesting parts of the original film was Karloff’s ornate sarcophagus and his incredible various forms of makeup throughout the story. While Ahmanet’s sarcophagus was kind of generic-looking, I did find the rest of the props and settings to be highly detailed and engaging. New details include various mythological statues directly facing her final resting place, which is submerged in a deep pool of mercury. During her violent and dark ritual crows writhe  unnaturally, having been bound by their claws and hung upside down throughout the room. While sloppy CGI plagued the monsters of the Fraser films, Boutella’s overall appearance and performance is more aligned with the “raggedy cloths and makeup” approach of the monster classics, especially as the film progresses.

The elephant in the room is the fact that The Mummy is clearly a Tom Cruise vehicle. His involvement in the film was inevitably going to impact the look and feel of it. Love it or hate it, there are numerous scenes in this movie that are exactly like the scenes of Cruise’s other popular action franchises. To be honest, I found a couple of them to be highly engaging. The plane crash segment of the movie’s opening would feel right at home in one of Cruise’s recent successful Mission: Impossible films. And due to the fact that Cruise insists on doing as much of his own stunts in-camera as humanly possible, the scene was very exciting. I also enjoyed a later underwater scene where Cruise is being tailed by numerous undead adversaries in a flooded tomb. 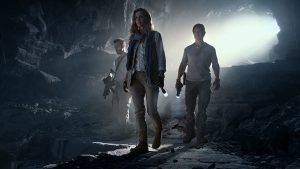 Some critics took delight in pish-poshing Cruise’s character and performance… but frankly this character is no different from what Cruise brings to the table in his other action vehicles. Kind of like a nimble Arnold Schwarzenegger, Tom Cruise has always been a star who plays a version of himself (or his brand) in his action roles. When you go to see a Tom Cruise movie, you know you’re basically going to see all of the classic “Tom Cruise” stunts and mannerisms attached to a new character with a familiar generic name and haircut. It truly baffles me why this kind of performance was so highly praised in 2015’s Mission: Impossible Rogue Nation, yet so viciously loathed in this year’s picture. The only reason I can think of is that there comes a time in the career of every A-Lister of yesteryear where he or she becomes the target of a once-loving population… and maybe it’s just Tom Cruise’s time to be taken down a peg or two in the fair-weather public spotlight. I get that The Mummy was never the right kind of movie for an action vehicle; but after sitting through three slapsticky Brendan Fraser movies in the past 18 years (the last one featuring magic yetis which mysteriously appear to save the day halfway through the film), I must say that Cruise’s professional action-sequences were a solid upgrade to a long-troubled franchise.

Despite its engaging opening, The Mummy peters out towards the middle of the film before arriving at a satisfactory ending. I largely blame this dip on the movie’s lackluster attempt at world building with Russell Crowe’s Dr. Jekyll. The inclusion of his monster laboratory and his high-profile group of special agents felt like too much at once. Eagle-eyed viewers probably enjoyed some of the subtle (and sometimes not-so-subtle) visual references to other Universal Monsters films (I think I even spotted what appeared to be a bust of the classic Mr. Hyde makeup from Rouben Mamoulian’s 1931 classic sitting out of focus behind Crowe’s desk), but these visual cues didn’t add much to the world of the film because they felt so obviously placed and rushed. Universal’s Dark Universe is attempting to build a world of monsters much like Marvel Studios’ world of superheros. But Marvel spent several movies teasing Nick Fury before S.H.I.E.L.D. was fully brought into full view. Universal would have been wise to demonstrate similar restraint with this picture, focusing instead on building the world through the tone of the standalone picture itself.

To make matters worse, Crowe’s performance is so over the top that it pulled me right out of the movie. He’s okay enough as Dr. Jekyll, but when he turns into Mr. Hyde the movie rises to ridiculous proportions. If you didn’t like his singing in Les Miserables, wait till you see his international character acting! His faux cockney accent reminded me of what it would look like if Guy Ritchie directed a Power Rangers villain. Believe it or not, Tom Cruise’s performance actually dips in quality when he interacts with Russell Crowe in the film. Their scenes together in the middle of the movie are some of its worst. There is one point where Jekyll describes his nefarious plan (to kill Tom Cruise), and Cruise just keeps looking at him and saying, “You want to do that!? That’s your plan!? You want to stab me with that thing!?” I kept waiting for a punchline that never came. The creepy crows from the start of the movie were an eerie addition, but this Crowe’s gotta be toned down in future installments!

With Russell Crowe out of the picture for the final third, The Mummy arrives at a satisfactory climax and conclusion. Sofia Boutella is given more room to be a monster, and she has some awesome scenes where she literally kicks the snot out of Cruise’s character. It was pretty cool that her character was given such raw power in a marketplace where lackluster underpowered villains have become a staple of the big blockbusters of the multiplex in order to make way for the easily-won triumph of the larger-than-life protagonist(s). It was a breath of fresh air to see Tom Cruise happily take numerous beatings for the camera on this one. Like all of Cruise’s other franchises, the finale offers him some moments to connect with his decades-younger female romantic interest (this time played satisfactorily by Annabelle Wallis… although I wish the film allowed her more screen time to develop as a character, especially given the fact that she will likely be a big player in upcoming entries in the series) and wrap up the picture with a nice bow on top. I was kind of disappointed that this flick borrowed some of the “protagonist staves off an undead horde” elements of the previous trilogy, but I wasn’t surprised given the population’s tireless fascination with similar tropes in countless zombie stories. With that said the big action moments of the climax largely outweighed the lukewarm franchise-starting nature of the somewhat happy ending.

To recap, The Mummy is not nearly as bad as the critical review pile-on would lead you to believe. It has a surprisingly engaging opening, a sloppy second act, and a satisfactory conclusion. It isn’t a great movie; but overall, I was entertained by the film. Based on some of the movie’s positive elements, I believe it’s too early to predict doom and gloom for the fate of Universal’s Dark Universe. Bill Condon is up next to direct Bride of Frankenstein, and he shows tremendous potential given his deep love and fascination with the original film and its director, James Whale. Folks need to keep in mind that way back in 2008, Marvel Studios released The Incredible Hulk just a month after Iron Man debuted to tremendous critical acclaim and fanfare. The Incredible Hulk didn’t do as well and Marvel appropriately moved on from the concept, sticking to what worked for the series and exorcising Edward Norton from future installments. After seeing The Mummy, I am happy to say that I still have hope for the Dark Universe if Universal learns the right lessons from this movie’s performance and reception.

Stay tuned to Horror News Network for more coverage of the Dark Universe as it breaks!