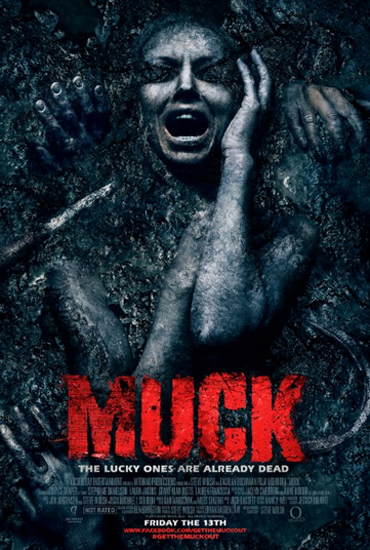 Synopsis: After narrowly escaping an ancient burial ground, a group of friends find themselves trapped between two evils, forcing them to fight, die, or go back the way they came.

Our Thoughts: ‘Muck’ is a sexy new horror flick that is a bit more sexy than it is horror. It is described as a throwback to old school slashers, though I really didn’t get that vibe from the film. It was more sadistic in its portray of violence that slashers, making it more reminiscent of ‘The Last House on the Left’ style films, with tortured, brutalized women running for their lives. However this film focuses far more on scantily clad women than actual slashing or terror, at least for the first half of it.

The film starts in a unique way, with the story beginning at the midway point of being a traumatic experience. A group of friends emerge, barely alive from a marsh, covered in mud, and “muck” so to speak,severely injured and barely clothed and having lost friends. Finding and empty house, they think they are safe, when a mysterious stranger starts torturing and killing them.

There are more shots of women in front of mirrors in their underwear, or nothing at all, than any horror film I’ve seen, and there were a few scenes of girls checking themselves out that went on far too long. The horror doesn’t really start until halfway through the film. I enjoyed the latter half of the film much more than the first. The practical effects were the strongest point of the film and there was no CGI used whatsoever. I also really liked the dark stylization and the aesthetic that the director creates. As for the plot, not much is really explained to the audience. You are left wondering who is attacking them and why. But maybe that’s the point. The film is clearly meant to be more fun than meaningful, with quite a bit of humor and self awareness at play, and even talk of “being in a horror film” by the characters.

Kane Hodder is extremely creepy in his role as Grawesome Crutal, as were the other murderous scarred men. Playboy Playmate Jaclyn Swedberg, who plays Terra gives a sexy performance as expected. I give the filmmakers credit for making a unique horror film that plays by it’s own rules, which is something extremely rare in horror today. However there was far too much focus on women’s barely clothed bodies for my liking and I would have liked to see more focus on gore and violence. If you’re looking for an original, fun and sexy horror film that doesn’t make a whole lot of sense, then ‘Muck’ is for you.