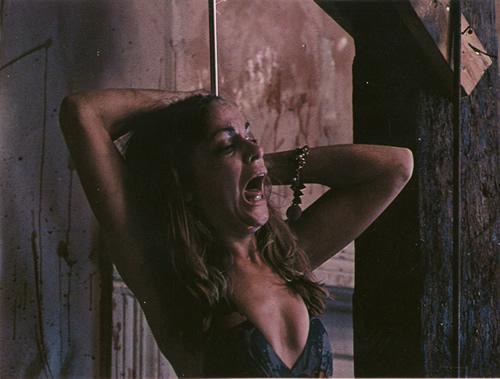 MPI/Dark Sky Films, one of the leading distributors of independent and genre films, announced today they will be releasing a restored version The Texas Chain Saw Massacre, Tobe Hooper’s 1974 classic.  The re-release comes in celebration of the film’s 40th anniversary, with the restoration having its unveiling at the SXSW Film Festival in Austin, Texas next week.

In 1973, Tobe Hooper, a cast of unknown actors, and a crew of Austin film students and recent graduates headed to Round Rock, Texas in the middle of July. For the next 32 days they worked around the clock in 100 degree weather to make The Texas Chain Saw Massacre.  The movie became a huge hit on the drive-in circuit and eventually grossed $30 million.  It was invited to the 1975 Cannes Film Festival Director’s Fortnight, and was acquired as part of the permanent collection of the Museum of Modern Art.  Since then, it has become the eighth highest-grossing horror franchise of all time. In 2012, Sight & Sound magazine named it one of the 250 most important movies ever made.

The new version of the film will be released in theaters this summer with a brand new 4K transfer, roughly four times the resolution of today’s more commonly used 2K for cinema.   This is the only transfer of The Texas Chain Saw Massacre to go back to the original 16mm A/B rolls, the actual film that rolled through the cameras.

The restoration of the film, overseen by Todd Wieneke of Dark Sky Films, took place at NOLO Digital Film in Chicago with the use of an ARRISCAN Film Scanner.

Taking 5 months of 40-hour workweeks to complete the color grading and the restoration, NOLO engineer Boris Seagraves stated, “This film probably needed the most restoration of any project we’ve done.”

Having been shot on less expensive 16mm film stock and cheaper, tougher “reversal” stock, (which means there is no negative), the restoration started by taking the original 16mm film that rolled through the cameras and transferred all 120,960 frames to a 4K scan.

Scratches, film stains, chemical stains, dirt, torn perforations, rips in the film image and glue splices had to go through a pain-staking correction process frame by frame.  “There were hundreds, if not thousands, of instances where you’d find a splice mark cooked into the middle of a frame.  Some frames would have close to two hundred dirt events on them. We also spent a lot of time stabilizing the image. When doing a digital scan of a conformed 16mm print with a splice at every cut, it can be tough to achieve the high standards we all aspire to in the era of digital cinema. What might have passed as acceptable in the 70’s looks jarring now. So we worked hard to smooth out the tremors that almost inevitably occur when scanning this type of film element. There were tears in the film that we had to digitally rebuild from adjacent frames. There were tens of thousands of things we were dealing with”, said Seagraves.

Estimating that he spent about 50 hours on the color correction alone, NOLO Colorist Michael Matusek used a previous transfer of the film that had been supervised by Tobe Hooper as his guide to a rough color correction. Tobe Hooper then gave notes on this roughly timed version, and the process of adjusting the color began.

Hooper, who helped score the film and did the sound design, was also deeply involved with the audio restoration.

Todd Wieneke stated, “I’ve seen the film literally frame-by-frame and I’m still hearing and seeing things I never noticed before…it just adds a whole different level”.  Matusek added, “This 4K scan delivers such an intense reality that it feels like you’re really seeing through the film to the actual world behind it.

Tobe Hooper stated, “I haven’t seen The Texas Chain Saw Massacre on the big screen for many, many years.  This 40th anniversary restoration is absolutely the best the film has ever looked.  The color and clarity is spectacular, displaying visual details in the film that were never before perceptible.  The newly remastered 7.1 soundtrack breathes new life and energy into the film.  I am very much looking forward to audiences experiencing this film as they never have before”.

Now, 40 years after it’s initial release and coming back home, The Texas Chain Saw Massacre’s new transfer can be seen with a fresh pair of eyes having its world premiere at SXSW, Monday, March 10th at 9:30pm at the Topfer Theatre.

Details regarding the film’s theatrical re-release this summer will be announced in the coming months.