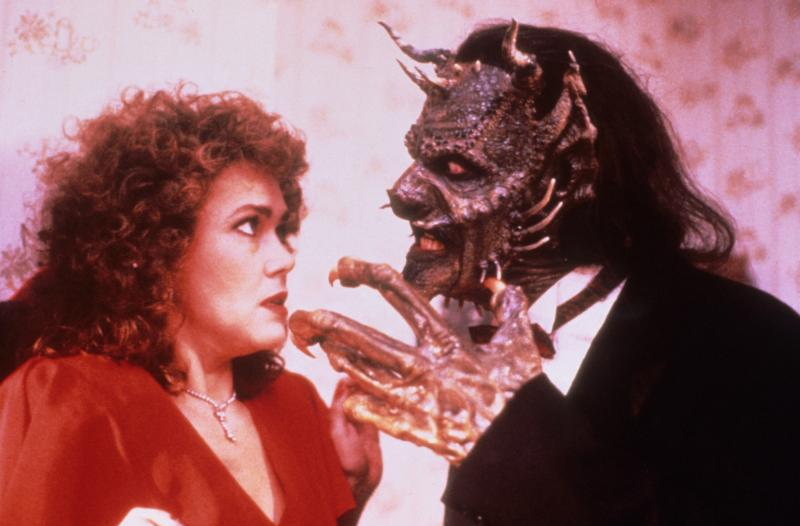 Producer Richard P. Rubinstein and director extraordinaire George Romero created a formidable team in the late 70’s-early 80’s. Their production company Laurel Entertainment was responsible for such horror classics as Martin (1977), Dawn of the Dead (1979), Creepshow (1982) and Day of the Dead (1985).  Not content to redefine horror cinema, Laurel Entertainment turned its sights to television in 1984 with the syndicated anthology series Tales from the Darkside, attempting to replicate the lurid E.C. Comics fun of Creepshow but in a more sedate and humorous style.  Tales from the Darkside never quite lived up to its illustrious patronage but it did provide 80’s horror kids with a semiweekly dose of thrills and a memorable opening title sequence. Romero left Laurel Entertainment and when Tales from the Darkside ended its run in 1988, Rubenstein tried to catch lightning in a bottle again with Monsters, another syndicated anthology genre show but without Romero’s crucial influence.  Monsters ran for 3 uneven seasons with each episode highlighting a different original monster creation utilizing a similar horror/comedy approach that Tales from the Darkside had tried with such mixed results.  Now twenty three years after the end of Monsters, eOne Entertainment has released a nine dvd set Monsters: The Complete Series, containing all 72 episodes of the show.  The series has been remastered so picture quality is as good as it going to get for a 20+ year old syndicated show and there are no extras at all.

Back when the show was being syndicated, I watched Monsters half-heartedly, not impressed by the show’s atmosphere nor its creature effects.  Revisiting the series through eOne Entertainment’s ambitious set, my opinion has not radically changed but it is a much more entertaining experience than I had remembered. Filled with future stars like Lili Taylor, David Spade, Tony Shalhoub, Steve Buscemi, Gina Gershon, and Chris Noth as well as beloved character actors like Darren McGavin, Billy Drago, Adrienne Barbeau, Linda Blair, Jerry Stiller, Deborah Harry, Mary Woronov, and Meatloaf (just ignore Tori Spelling, Rich Hall, and Leif Garrett), Monsters contains some highly enjoyable performances. Make-up guru Dick Miller worked on a shoe string budget to create the monsters for the show and his creations are patchy with some creatures looking fantastic (the zombie in “My Zombie Lover,” the monster in “Jar,” and the cancer bugs in “The Offering”), but the vast majority of the effects are underwhelming. Yet it is the clichéd stories and lame comedy that is the biggest let down for many of the episodes. While adaptations of Robert Bloch, F. Paul Wilson, Dan Simmons, Frank Belknap Long, Gahan Wilson, and Stephen King are all worthwhile and the directing of Bette Gordon, Tom Noonan, Debra Hill, and Lizzie Borden makes more of the often tedious scripts, Monsters is a perfect example of a show’s reach exceeding its grasp. That’s not to say that Monsters  is a waste of time, it’s just wildly inconsistent, a fascinating time capsule of late 80’s/early 90’s horror, particularly lean years for  horror obsessives. If you are nostalgic for the days when genre fans were willing to watch even sub-par offerings to scratch that horror itch, then Monsters should  satisfy.