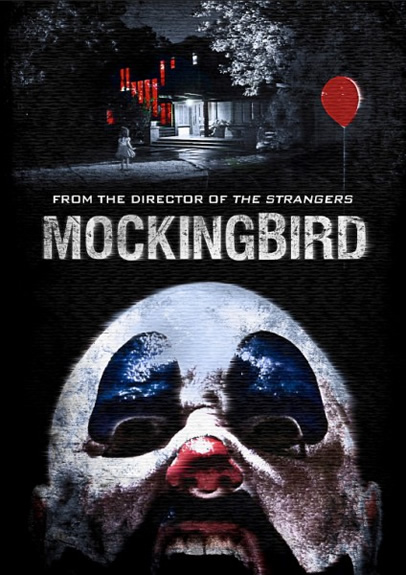 Synopsis: Three individuals each receive an anonymous, unmarked video camera and a horrific ultimatum to continue filming… or die. Experience the terror through the eyes of these unsuspecting victims, with a chain of found-footage events so real and absolutely dreadful, you’ll have to watch it again to believe it.

Our Thoughts: Mockingbird is another new found-footage style film, with a unique premise. The flick is set in 1995 with the premise to follow random people who have been giving video cameras and told to keep filming or they will die.

A married couple, a woman and a clown are chosen for this horrific game. They are happy to find the mystery video cameras at their door, but things take a sinister turn when the couple and the woman are given video tapes of a child being murdered. Each of them become terrorized by unseen people outside their homes using recordings, manikins and eerie classical music. The clown is actually a man living with his mother.  He is instructed to dress up as a clown and perform various tasks, such as taking Polaroid photos with children. He received letters telling him that if he did as he was told he would win $10,000, however from the beginning you can tell it’s not going to end well.

While the film is a little predictable, it still achieves a high level of suspense and dread. The biggest surprise comes from the person behind the terror, though we are left only to speculate on their motivation and if there are more people involved. The film is atmosphere and soundtrack driven more than anything, effectively uses classical music in an effective way to make very creepy, suspenseful scenes. There is not a whole lot character development with the exception of the Leonard, who dresses up as the clown, and more focus is given to the reaction and the emotional response to what is happening to them. I found the Leonard’s story to be quite sad actually and there is a veil of melancholy sorrow to the film. There are art film elements at play, not often found in horror. The acting is top notch for a found footage film, with standout performances by Barak Hardley, Audrey Marie Anderson, Alexandra Lydon, and Todd Stashwick. If you’re looking for blood or gore, you won’t find it with Mockingbird, but you will find psychological terror and tragedy. Mockingbird is an artistic found-footage style film that true fans of the genre will enjoy!