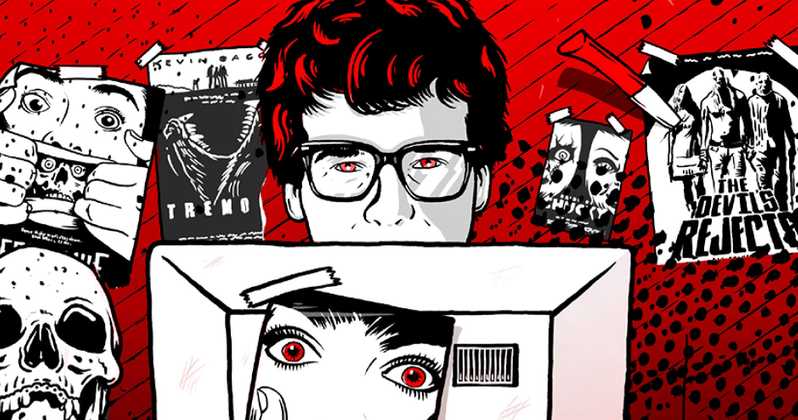 Last year author Michael Gingold unleashed a cool and original book containing original newspaper clippings of ’80s horror movie advertisments called AD NAUSEAM, released by 1984 Publishing. Gingold, who is a writer and editor at Fangoria magazine and also a contributor to other outlets such as Rue Morgue, had saved the clippings from local papers during his youth. His foresite was every horror fan’s gain, as the book would go on to prove very popular on Amazon and other online retailers, providing a unique sense of nostalgia that brought us all way back to the day when cinemas and cinemas alone ruled the industry. As reported exclusively by Entertainment Weekly, Gingold is ready to take us on all on splatter-filled journey through the ’90s and early 2000’s with AD NAUSEAM II, currently available for pre-order on Amazon.

While the ’80s provided us with either the beginning or continuation of some of the most iconic horror franchises ever (Halloween, Friday the 13th, Evil Dead and Nightmare on Elm Street just to name a few), the time period covered by AD NAUSEAM II will provide us with a glimpse into the origins of quite a few as well. Saw, Scream, The Blair Witch Project (which I will defend until the day I die) and Leprechaun were just some of the noteworthy franchises to debut during the period of grunge rock, janko jeans and wallet chains.

HNN’s Sean McLaughlin was able to catch up with Mr. Gingold, gain some insight into his labor of love Ad Nauseam II (to be released on September 24th).

HNN: What was it like to have a lifelong project like AD NAUSEAM published and receive such a wonderful response?

Mr. Gingold: The publication of AD NAUSEAM was the culmination of a dream I’d had for about 20 years. From around the late ‘90s, I knew I wanted to put my ad collection in some kind of book, and the title occurred to me immediately. It was one of those situations where I’d been waiting for the right opportunity to arise, and when Dave Alexander responded to the idea as a Rue Morgue book, it was like the stars were aligning. Matt Chojnacki at 1984 Publishing turned out to the perfect partner, and the way he and his team designed and laid it out was everything I had hoped for.

HNN: When did you realize that you wanted to make a follow-up book?

Mr. Gingold: As soon as AD NAUSEAM was out, and I was holding it in my hands, I knew I wanted to do a follow-up, and Matt and Dave were all for it. It was an interesting situation because there weren’t nearly as many theatrically released horror films in the ‘90s as there were in the ‘80s, thanks to video taking over. But then in the late ‘90s and the 2000s, thanks to the triple whammy of SCREAM, THE BLAIR WITCH PROJECT and THE SIXTH SENSE, it just exploded. So we decided to cover both those decades in the sequel.

HNN: Did you keep the approach to AD NAUSEAM II similar to the first book, or did you have to mix it up a bit since you’re dealing with a different time period?

Mr. Gingold: The approach to AD NAUSEAM II was basically “If it ain’t broke, don’t fix it.” People responded so strongly to the first book, and the combination of the ads with reviews from the period, that we took the same format with the second one. The main difference is in the ads themselves; you can track the way horror print advertising got away from the bold and sensationalistic approach of the ‘80s and become subtler and more suggestive in the ‘90s and ‘00s. And that’s when you started getting into the dreaded “floating head” design schemes—ugh. But there are still lots of great, fun and eye-catching images in there. 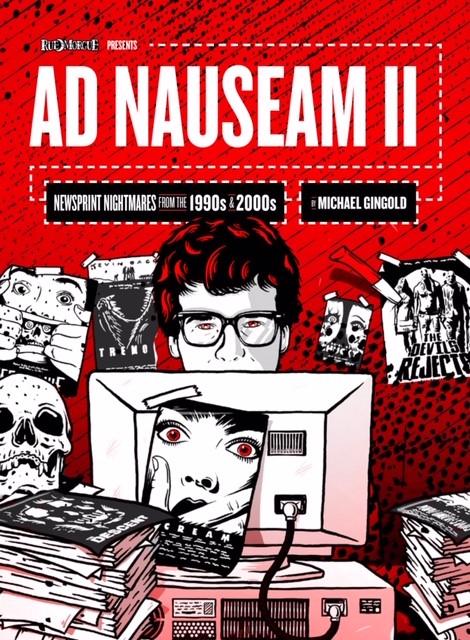 AD NAUSEAM II: Newsprint Nightmares from the 1990s & 2000s will be released on September 24, 2019. It will coincide with the release of a Sci-Fi version, also from Mr. Gingold, on September 10th. Both are available to pre-order now on Amazon.

We at HNN can’t wait for this release, and encourage all of our readers to check them out.