Halloween fans have been begging for a screen-accurate Michael Myers action figure from the 1978 original film for years. Thankfully, Mezco Toyz has stepped up to deliver a premium collectible that’s incredibly detailed for its size. From the high-end packaging, to the incredible likeness of the portrait, to the bounty of accessories, this figure is sure to make any Halloween fan happy! 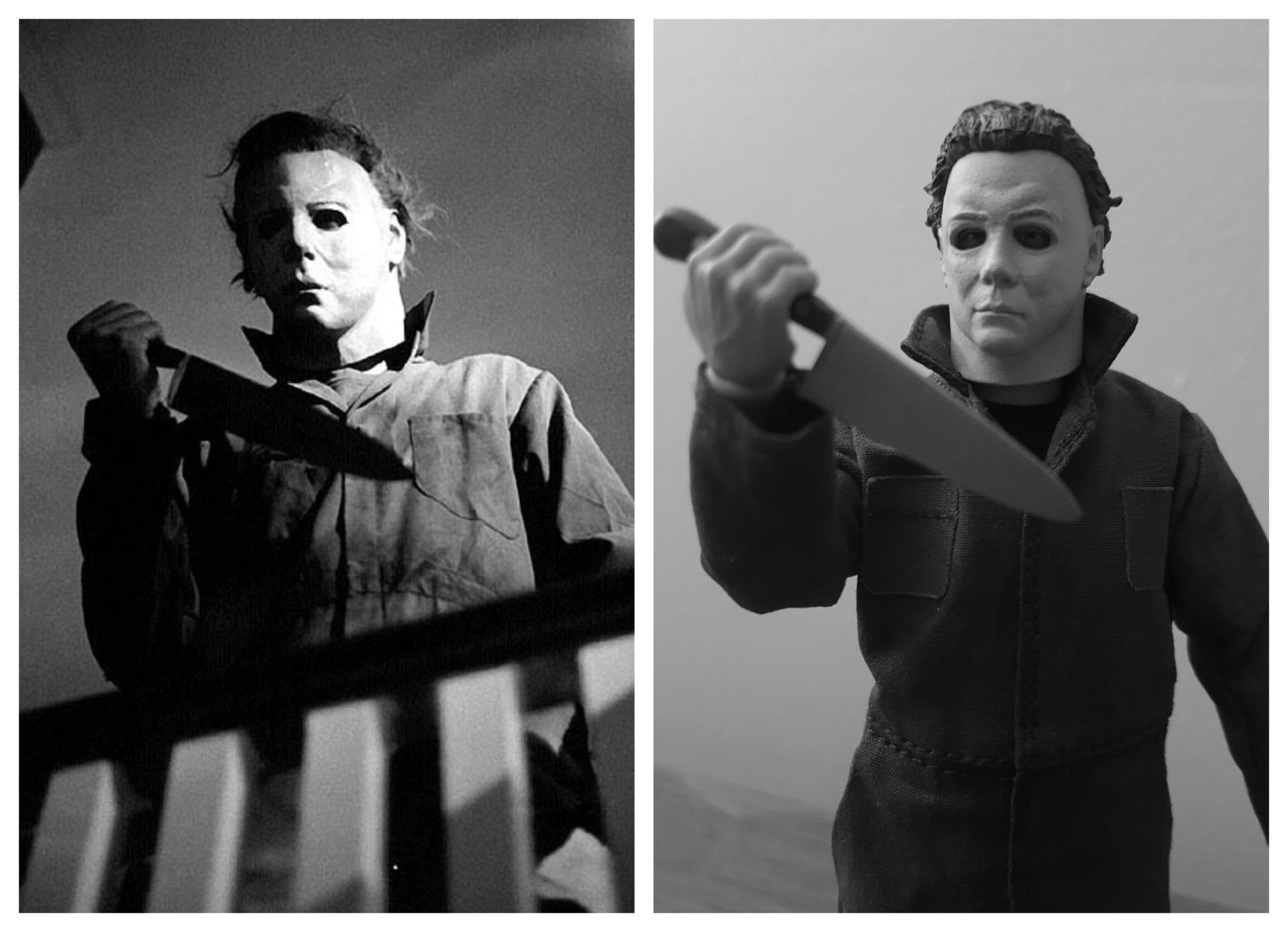 I’ve pretty much stopped collecting statues and action figures under 12″ years ago because the quality isn’t always there with the paint aps and the sculpts can be hit or miss. Frankly, there’s only so much area to work with on a small action figure, and fans can only reasonably expect so many details on such a format. However, Mezo is defying all expectations with their One:12 Collective offering of Michael Myers. It simply has details on it that even figures twice its size can be lacking. As I posed the figure and swapped out hands and accessories for these photographs, I was surprised at the tiny details my camera was able to pick up. The figure’s signature coveralls are painstakingly stitched to cover the body and fit like real clothes. This is an incredible feat for the format, and I’ve seen costumes like this look like garbage bags on similar figures. Mezco have always been interested in detailed clothing since the dawn of their Living Dead Dolls line, and their expertise in the format transfers over beautifully to this figure. 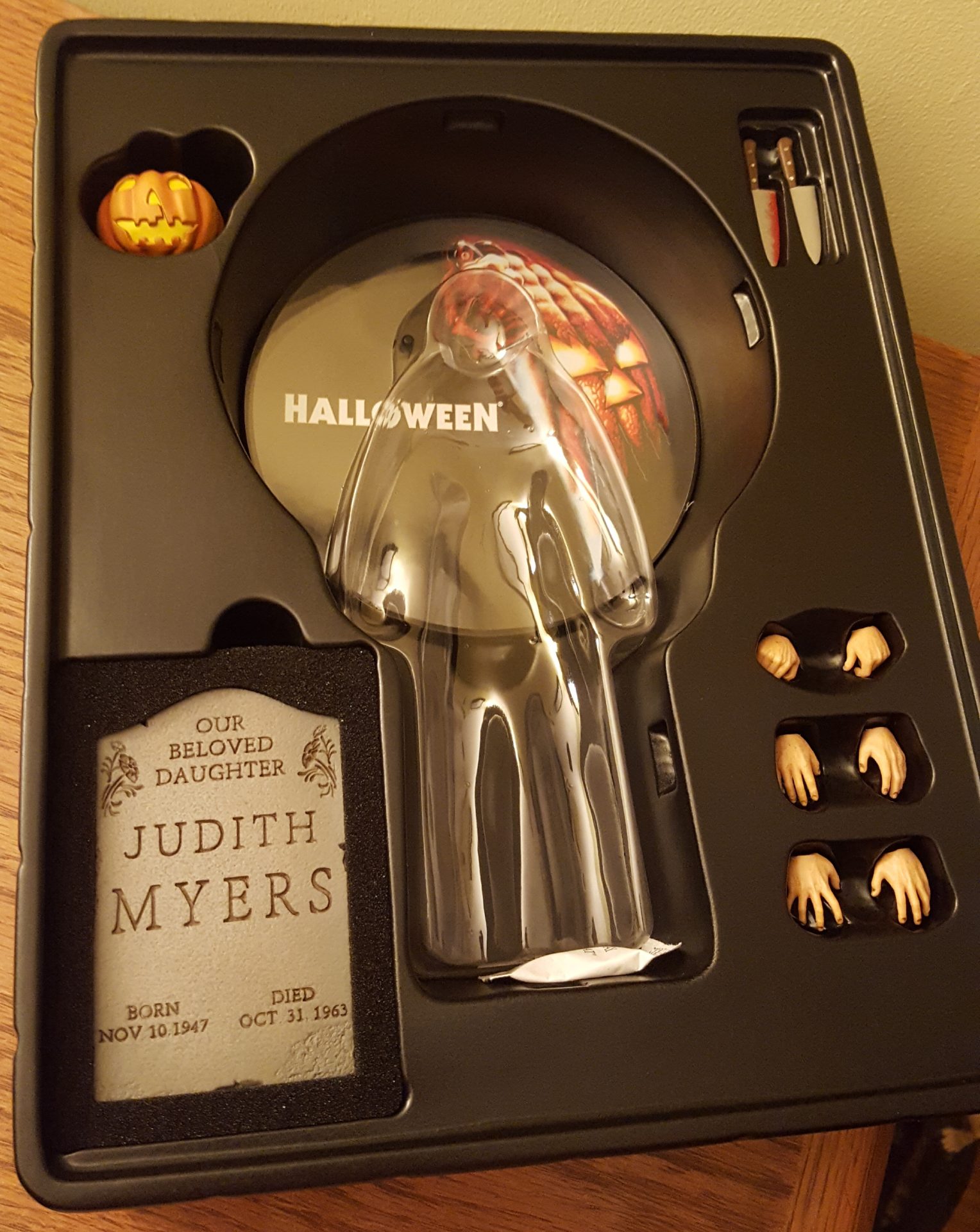 One thing that separates this high-end figure from a forgettable offering is its packaging and accessories. As I opened this figure’s box, I couldn’t help but feel like I was in for something special. Mezco uses lots of protective packaging to keep the figure and accessories safe, while still keeping the “mint in box” collector in mind, given the attractive organization of the extra pieces. For those whole like to open their toys, they include a branded clear plastic bag that’s meant to hold all of the accessories in one place. These little details show they’ve thought of everything, and they’ve really manufactured this product with the high-end collector in mind. The tombstone is made of hard polystone and it’s painted with accents to make it look like the real thing. The tiny jack-o-lantern looks just like it does in the iconic opening sequence of the movie, and the lights inside of it flicker in lifelike fashion. Even the stand is top-notch, offering a glossy sheen and a detailed print job on the logo and poster art. 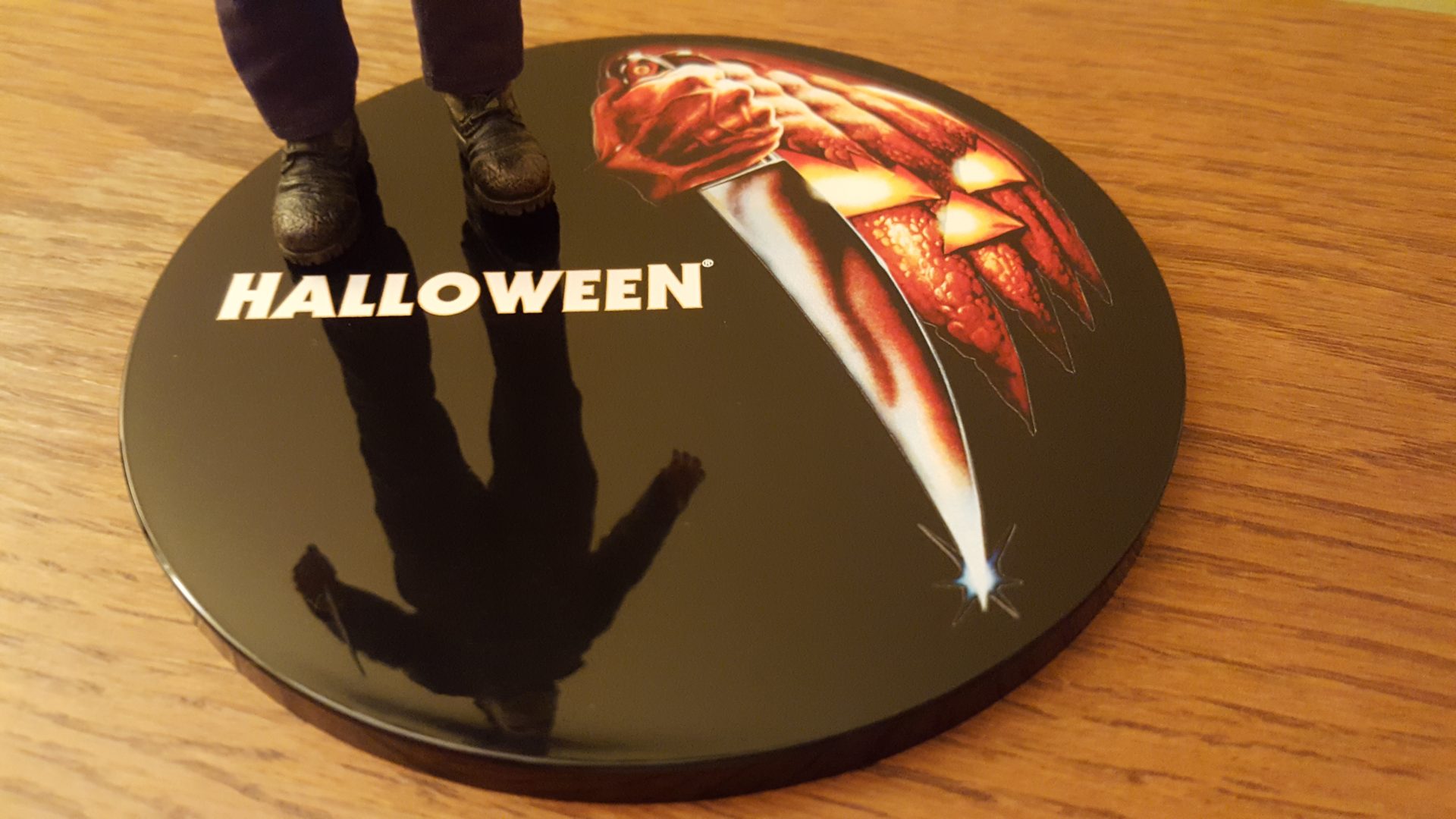 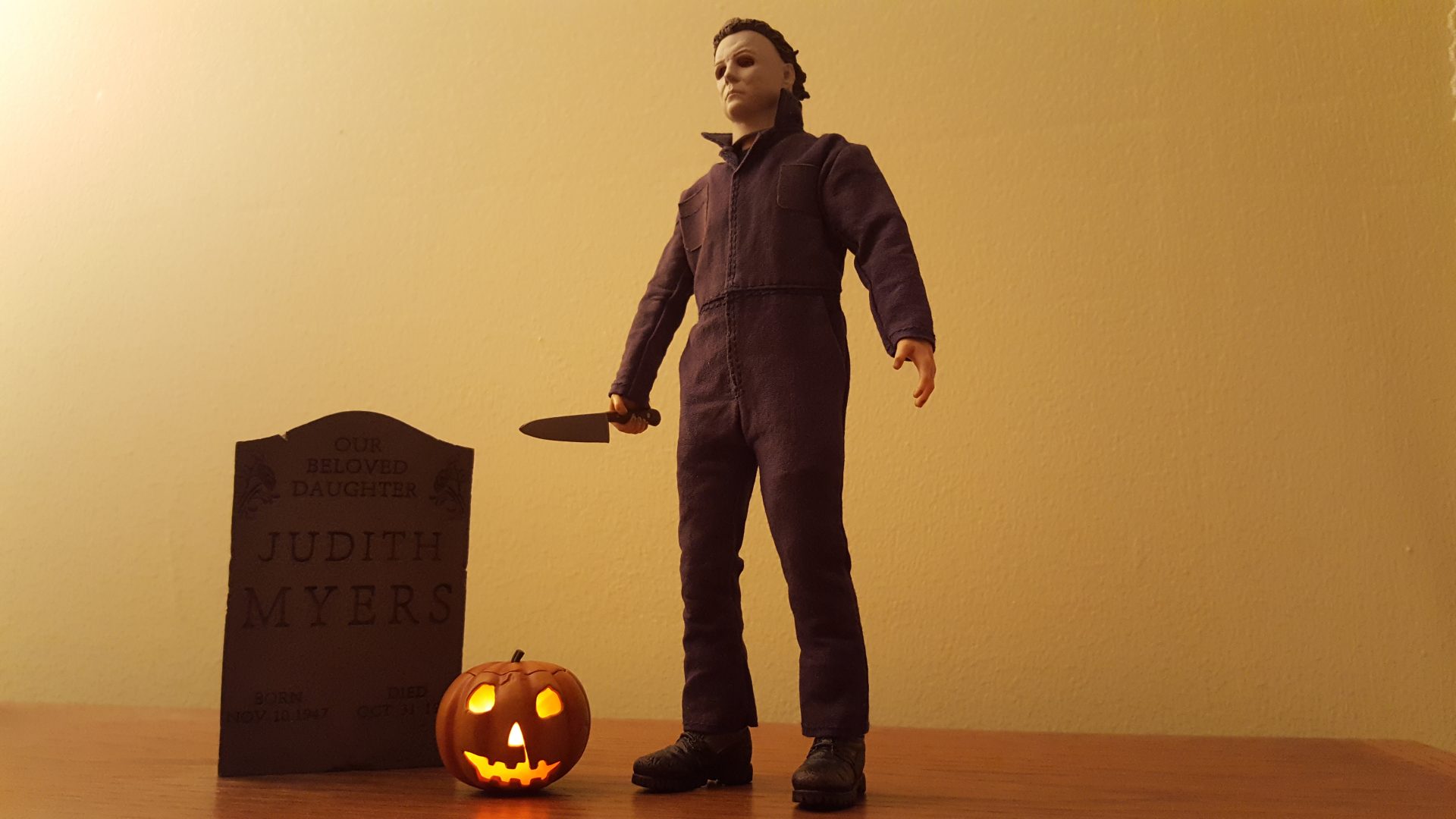 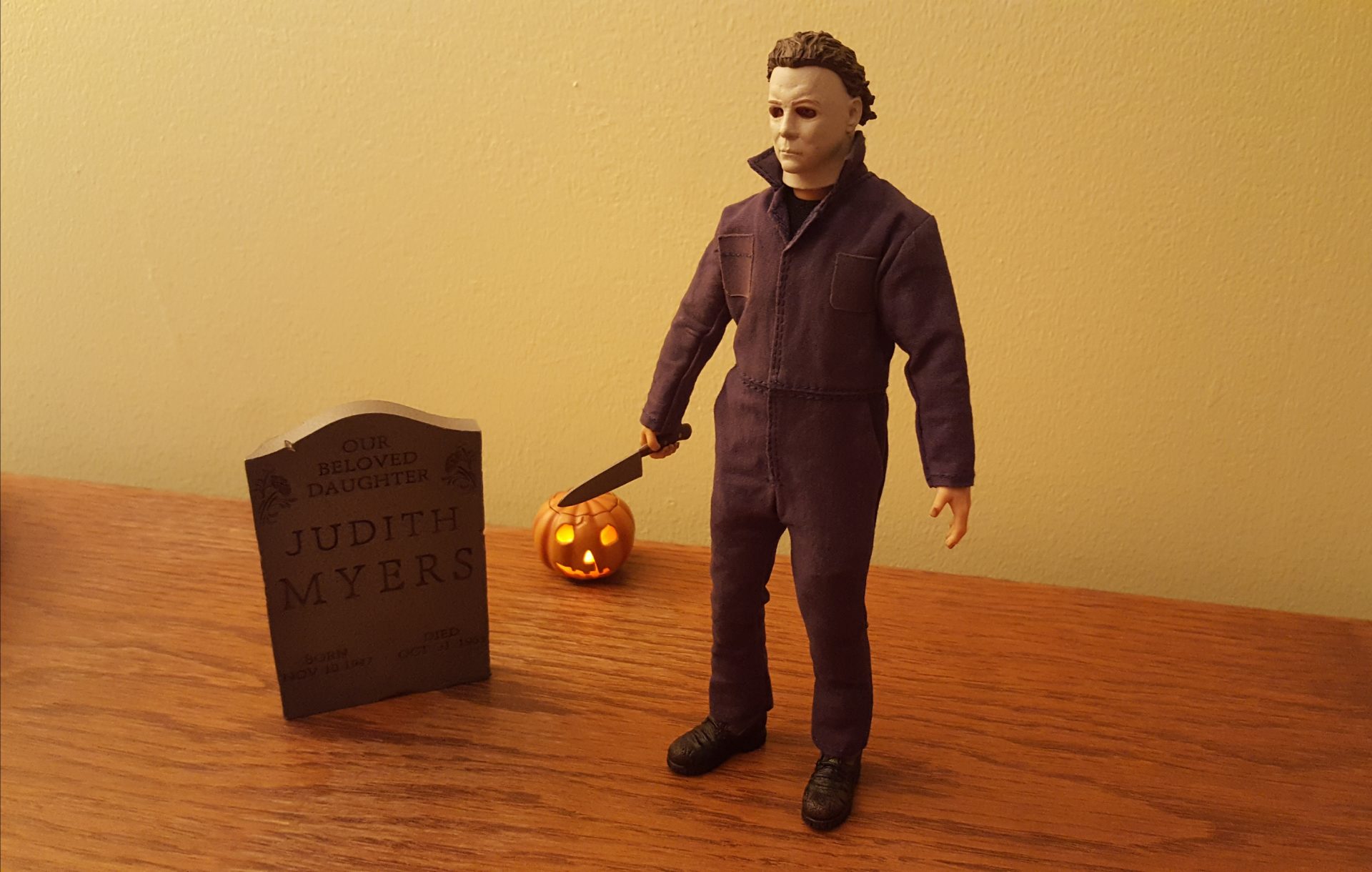 Mezco spared no detail when it comes to the likeness of the figure, and it looks screen-accurate and detailed from no matter which angle you look at it. I was surprised at the quality of the head sculpt, and I found that it has the signature Michael Myers look from every side. This is no small accomplishment, as previous Michael Myers releases (and their respective movie sequels) have always had trouble capturing the essence of the original mask. I’m pleased to report that this isn’t the case for this new action figure. I would be interested in seeing if they could have pulled off a more natural look to the mask’s hair if they used some kind of material instead of making it a part of the plastic sculpt, but it honestly could have come off looking more fake than what we ended up getting with this release. 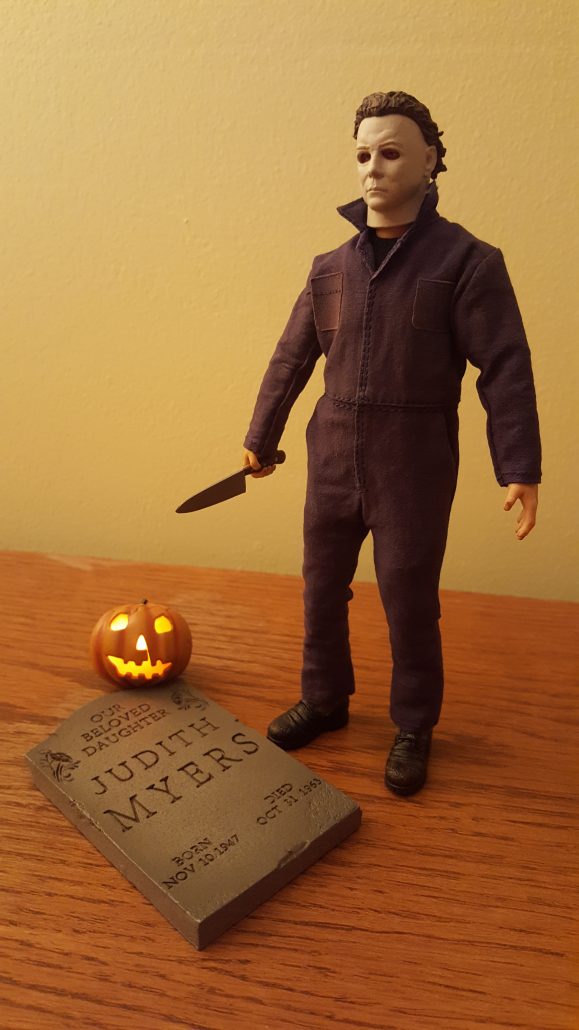 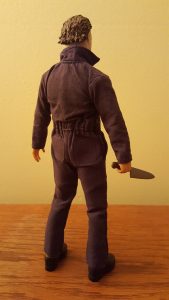 Mezco didn’t stop with the classic coveralls and the iconic pumpkin and tombstone… tucked away in the back of the box is a bed sheet and glasses so you can re-create Myers’ ghostly appearance in the middle of the film! Just like the main head sculpt, there are tons of hidden details on this accessory. Under the glasses are two eye holes, cut with precision and framing Michael’s eyeballs. It’s not every day that such a level of detail can be found on the eyes of a 6″ figure, but Mezco most certainly pulled it off in this release. On both heads, the shadows help pull off some very expressive looks to those stone-cold eyes. 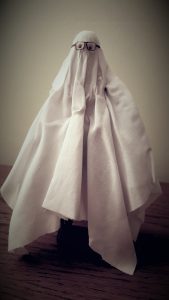 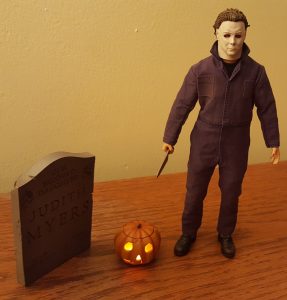 Despite its small size, the Mezco Toyz One:12 Collective Michael Myers figure has a gravity and presence to it that makes it a really nice addition to any Halloween fan’s collection. I had fun trying all of the accessories and posing the figure for my photographs. The box’s imagery is very clean looking and it presents the figure nicely, but this is one that’s meant to be opened up to be fully enjoyed. Fortunately, the packaging is well-made and its easy to put everything back into place when you’re done tinkering around with it. 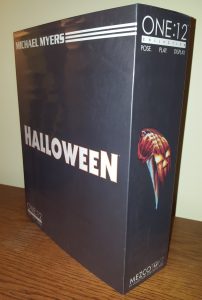 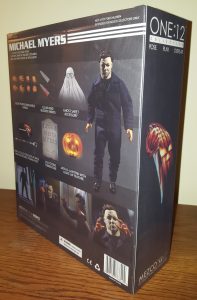 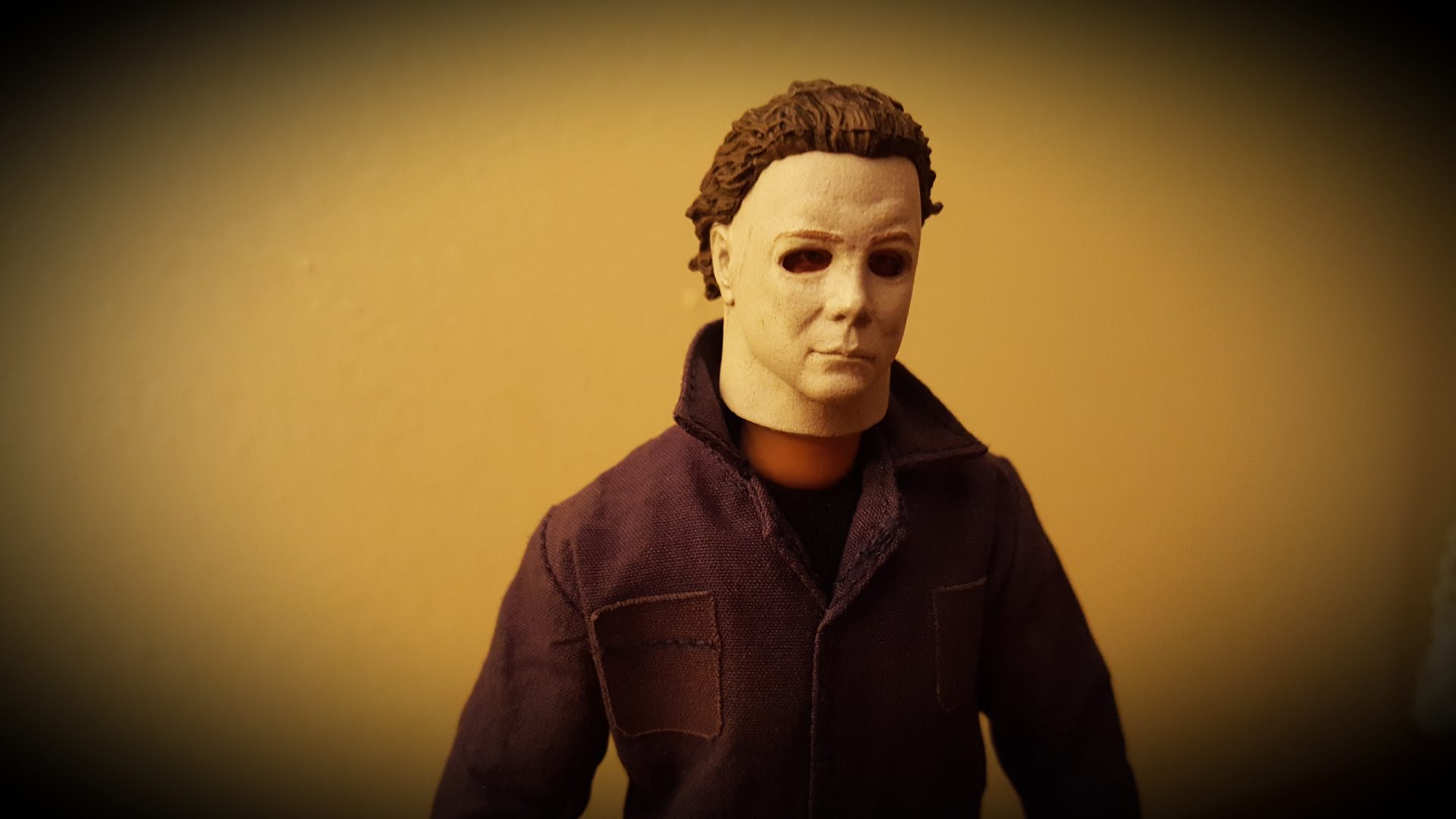 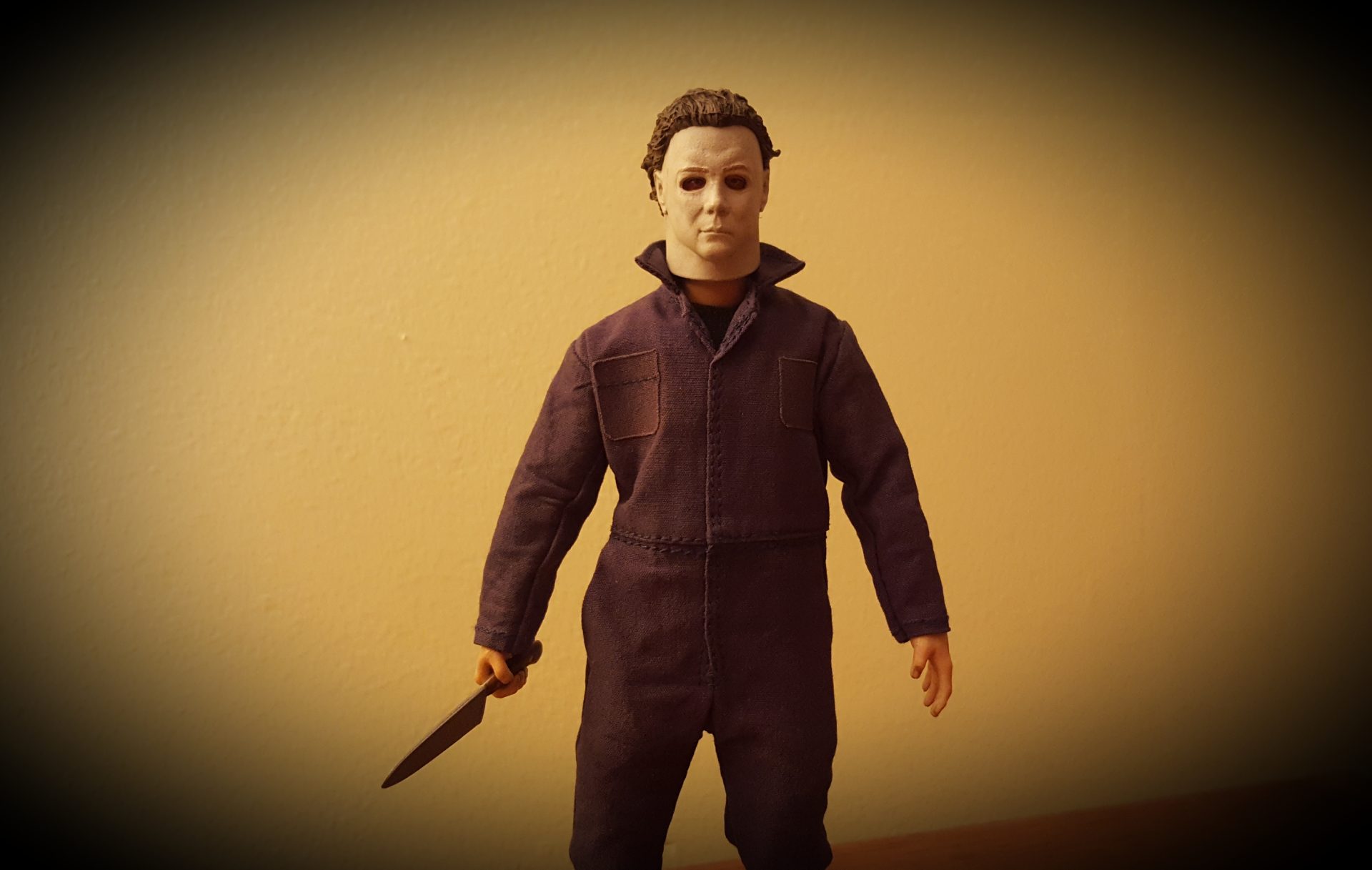 The One:12 Collective Michael Myers figure is already sold out on Mezco Toyz’s website, but you can still order one from one of their official dealers if you act quick! This Halloween, Michael Myers fans shouldn’t hesitate to treat themselves to an excellent reproduction of one of the trickiest likenesses ever to be captured in action figure format!

Stay tuned to Horror News Network for complete coverage of the Halloween franchise and upcoming Mezco Toyz products as soon as they break!