The final day of Mezco Toyz Fair 2021 saw another two reveals that horror fans will certainly be thrilled with.  First up is the announcement for this MDS Mega Scale version of Pennywise from the 1990 TV series adaptation of Stephen King’s IT.  Since the big-screen release of the theatrical version from Andy Muschietti back in 2017, the Tim Curry portrayal of the shape-shifting monster has received a ton of long-overdue love from the collectibles community right alongside the newer, more Victorian depiction by Bill Skarsgård.  This is important, as Curry’s more colorful and unassuming clown is proving to be just as toy-etic as the film version (and equally as scary.)  And it freaking talks!  No doubt there will be a phrase or two regarding red balloons.  No release date yet for the MDS Mega Scale Talking Pennywise…… 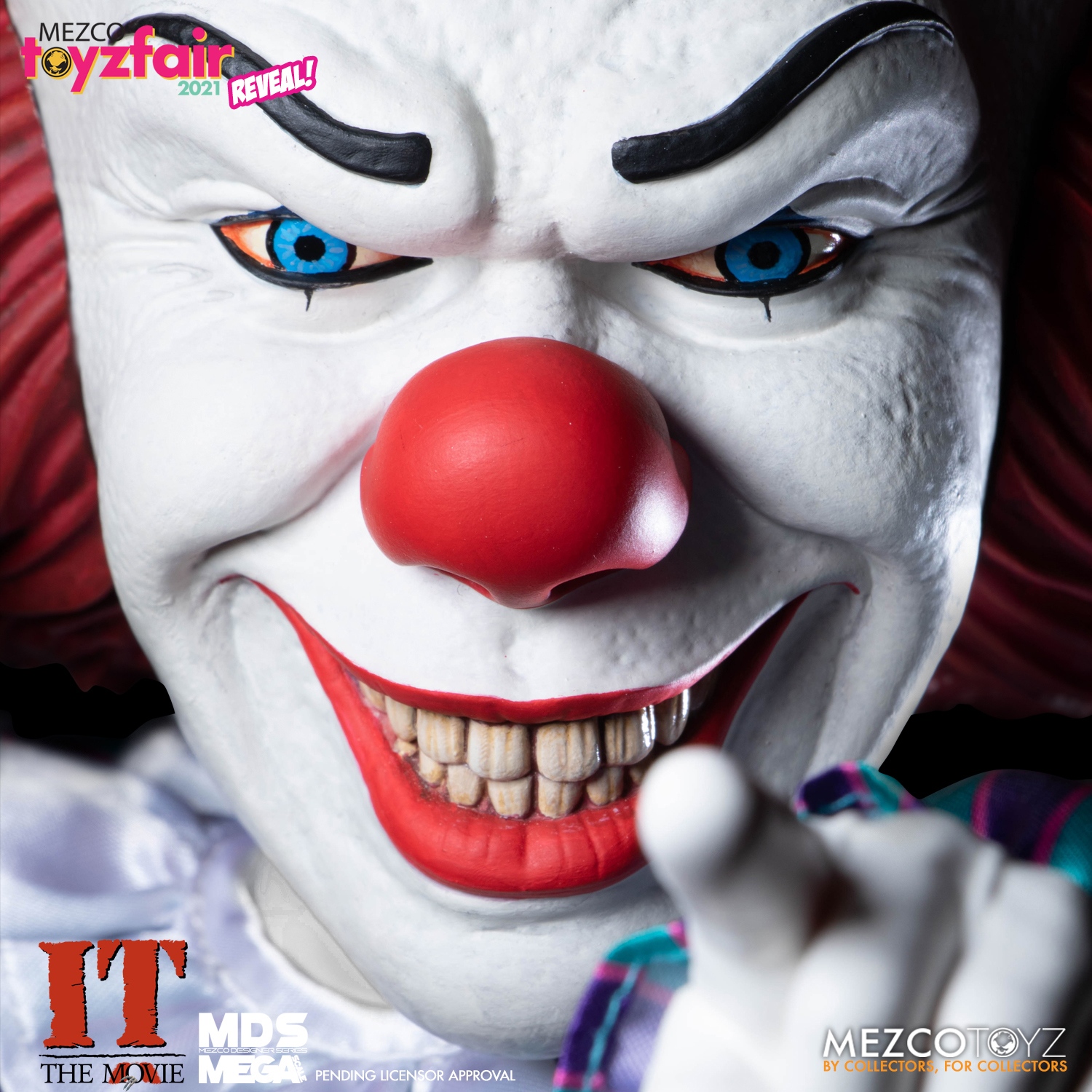 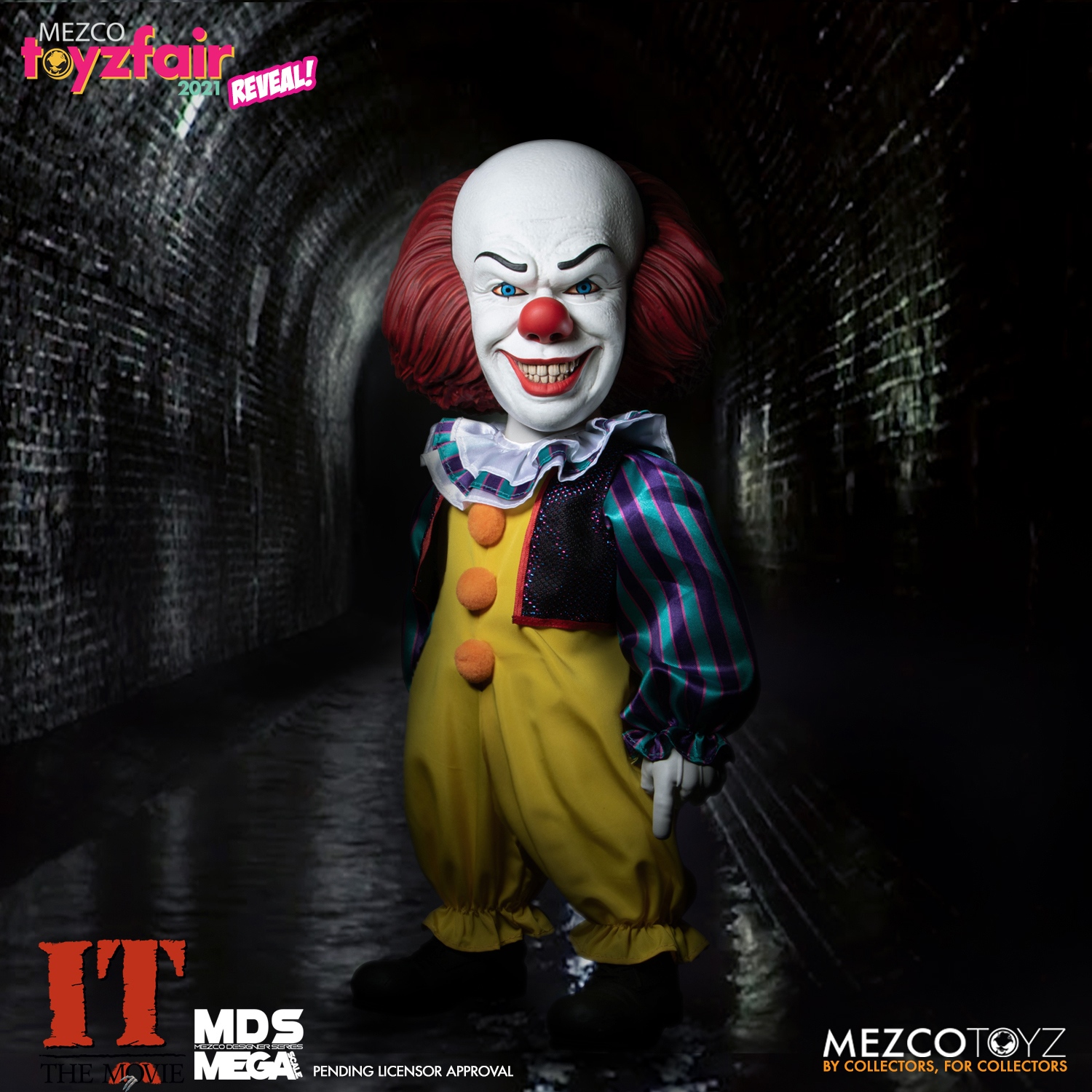 Back to the Living Dead Doll line we go to pay homage to a trailblazing horror sitcom which is once again gaining some traction with the current generation.  A couple of years ago Mezco unveiled a Five Points line of cartoonish versions for the entire Addams Family clan to coincide with the release of the 2019 hit animated movie.  Following up on that license, get ready for two family icons, Uncle Fester and Cousin It, to received the LDD treatment in spectacular fashion.  The shaggy hair and fur coat look very real and very cool.  Looks like these pieces are good to go since Mezco has already released toys from this license, so expect this 2-pack on FYI and Hot Topic shelves sometime in 2021! 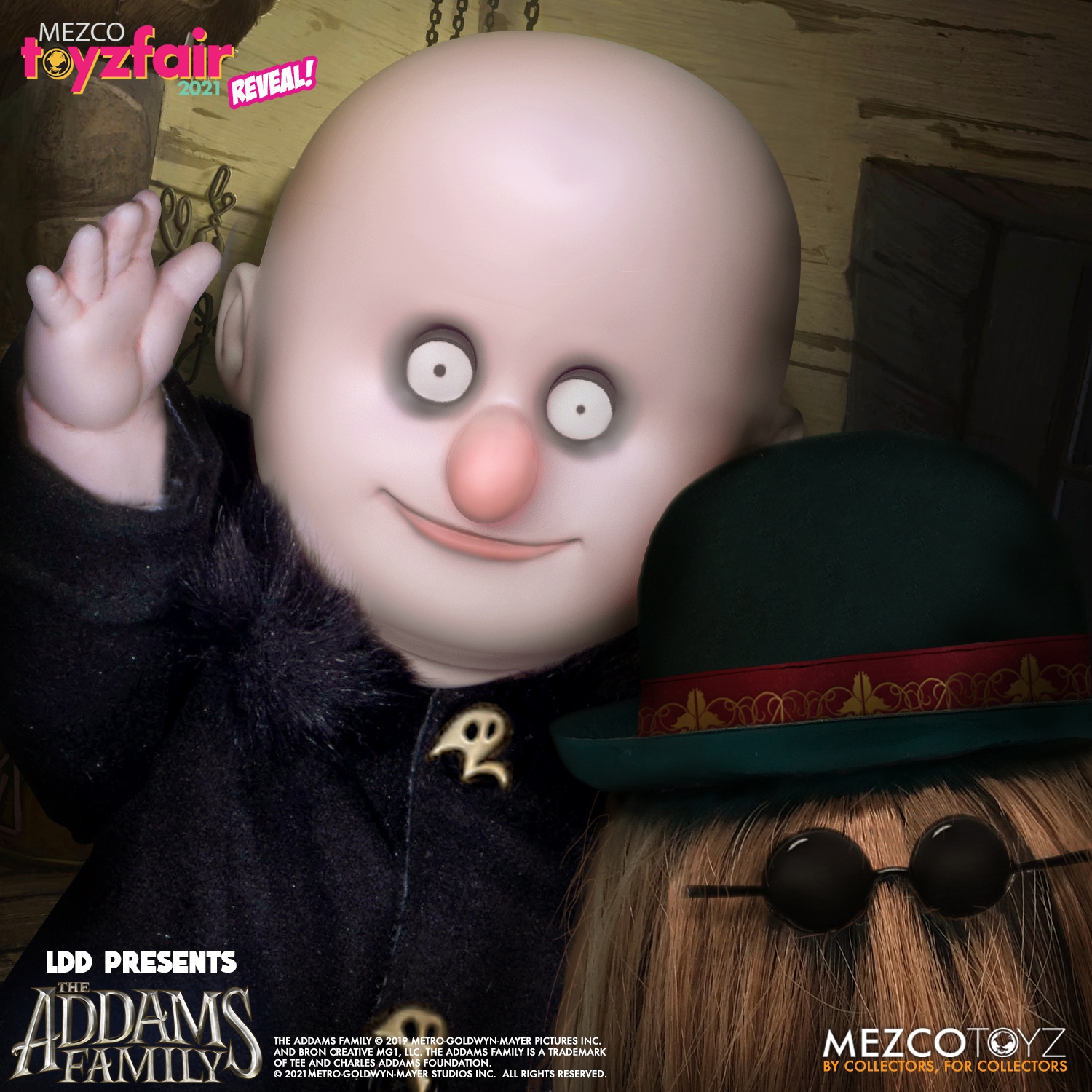 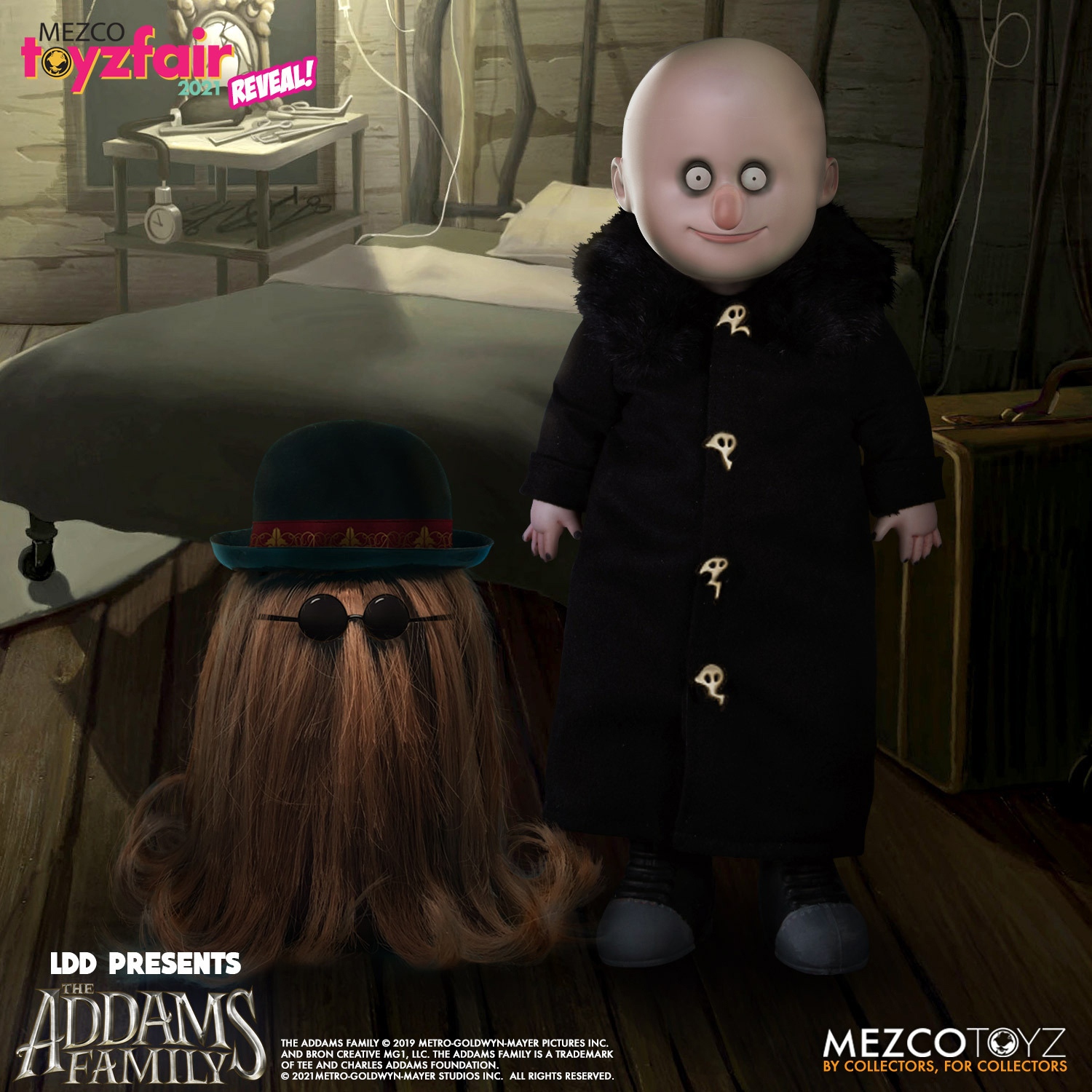 Although not horror, I wanted to mention another awesome reveal from the final day.  Mezco announced they will be releasing a One:12 Collective Ultraman soon, and if there was ever a reason to stray from the horror genre for a figure (other than Star Wars, of course) this may be it.  Ultraman is such an iconic character, somehow both recognizable yet underground at the same time which is a rare feat to accomplish.  Back in 2018 when Tsuburuya Productions made the license more readily available, Mego jumped on the opportunity right away and it’s great to see Mezco follow suit.  They will bring insane detail and further collectible appeal to a character that has been in line for an expanded appreciation for a long time, much like they did with the Popeye license a few years ago. 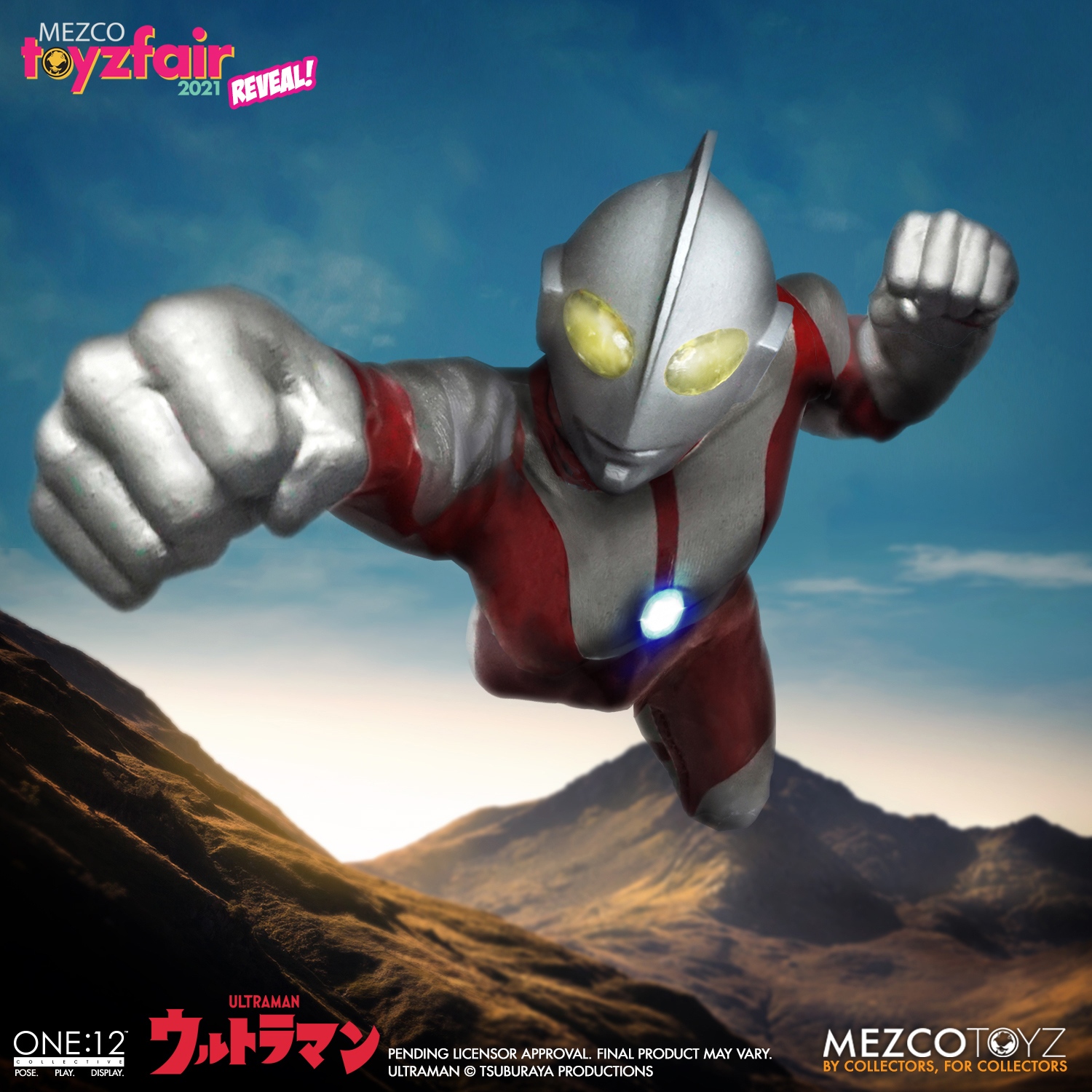 That wraps up the horror side of the 3-day Mezco Toyz Fair 2021!  It was exciting to see all that the toy company has in store for both collectors and fans alike.  Next step is to fully stock those store shelves…..see you on the battlefield!

The team over at Mezco announced their latest killer set in the 5 Points line, now available for pre-order.  Mezco's Monsters will bring you...

Ten actors have signed up to get creepy and kooky. Tim Burton’s upcoming Addams Family series, Wednesday, has added a slew of actors as series...