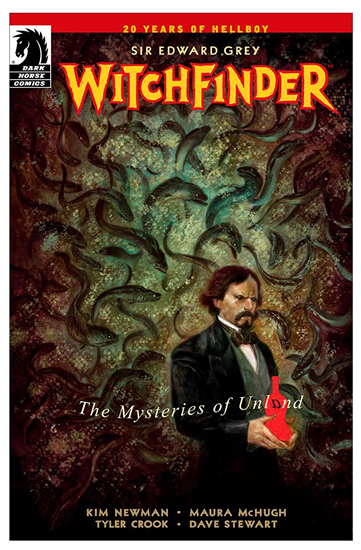 Horror News Network: How did it feel to take on the challenge of bringing back the Witchfinder character?

Maura McHugh: It can be somewhat intimidating when you are asked to write an established character, especially one such as Sir Edward Grey, who was created within Mike Mignola’s fun and popular Hellboy universe. But part of the point of taking on a job like this is to test yourself and to do something interesting with the world. When you start writing, the trepidation falls away and you get stuck into telling a fun and entertaining story.

Horror News Network: Describe the writing process work with you and Kim Newman?

Maura McHugh: We trashed out our primary idea for the series in person – in Kim’s kitchen in London. It was around Halloween when we were debuting an anthology horror play we were collaborating on with a number of other writers. Kim is from Somerset, and there was terrible flooding happening there at the time. We started with that as a location and came up with a concept. We wrote it up as a treatment, and Mike and Scott Allie (our Editor) gave it their blessing. After that, we wrote the scripts using the treatment as a guideline. Each of us had a pass at the script, and we usually batted it between us several times before it was sent on to Mike and Scott for their approval. Perhaps because it has been scrutinized many times, the scripts were well received. We did the same with the subsequent notes: one of us would incorporate the changes to start and the other would look over them before we sent on the adjusted script. We’ve both been involved in proofing the art and lettering, and doing the kind of fine-tuning that’s necessary once the artist brings his vision to the work. It has been a really enjoyable, and positive collaboration.

Horror News Network: Edward Grey is a very interesting character.  Issue #1 builds his background, along with mystery without a huge amount of the grotesque and gory.  Did you feel that necessary to build an intriguing back story for fans that may not be familiar with the character already?

Maura McHugh: Ultimately every story has to stand on its own merits. You can’t depend on readers who are familiar with the character’s backstory or his inter-relationship with the larger Hellboy universe. So, we did what every writer does: introduce a character in a curious situation, and (hopefully) maintain the reader’s attention with an enticing story. There are elements that regular Mignolaverse readers will spot, but it’s not necessary to have read any other Hellboy or Witchfinder story to enjoy this mini-series.

Horror News Network: I have to admit, the eels freak me out a bit.  I’ve gotten a sneak peek at Issue #2.  Without giving away any spoilers, what can you tell comic fans about what is to come and what they can expect?

Maura McHugh: I’ve come to like eels! They’re a fascinating species, and experts are still figuring out elements of the life cycle of the eels that frequent England. That knowledge was unknown to 19th century people, so eels were somewhat mysterious creatures which were also a fundamental part of this boggy landscape. That gave us leeway to do something extraordinary with them. Eels are rather like serpents, and our mythology is rife with tales about their dubious nature. Moors are liminal places: land and water at once. Unland. We played upon these elements, and we weren’t afraid to embrace the more extravagant side of the British horror tradition.

Horror News Network: Tyler Cook does a great job with the artwork, while Dave Stewart and his signature style of coloring are right on point with this book.  What is the process like with them? How did you feel seeing your vision the way they perceived it?

Maura McHugh: There is something magical about seeing your script conjured into life by an artist. It really never gets old, and Tyler has done a magnificent job with Sir Edward Grey and the other cast of characters we’ve assembled. His art has panache, and there’s a spirit to the characters’ interactions which is tricky to express fully in a 2D art form. Plus, he enjoys a humorous exchange – it’s not all gore and guts after all. There’s a reason Dave has won so many awards – his coloring is sublime. Tyler and Dave are the best team a writer could wish to work with. The artwork you get will never be how you imagined it in order to write the script, but your fondest hope is that the artist’s imagination and skill will translate your words into the best possible version of the story. Tyler and Dave have achieved that result.

Horror News Network: Over the last few years I’ve seen more women coming over to the “darker side of comics,” which please me immensely as a female comic fan.  How do you see the role of women in the horror genre of comics evolving? What draws you to work on a more mysterious and at time horrific book like Witchfinder?

Maura McHugh: I don’t think it’s unusual as I’ve always read, and written horror. It’s my default mode. I find it strange that people consider it strange! Women have been writing and drawing comics with horrific elements from the inception of the medium. If you attend any comic book convention you’ll see a huge audience of women and tons of women comic book creators. I doubt women were ever less attracted to horror comics over any other category, but perhaps they weren’t offered the work because it was perceived they weren’t as interested in that genre. Like men, women want to create good work and will take the jobs that allow them to do that. The same as any other creator I want to push myself and create memorable stories, in whatever medium interests me.

Witchfinder: The Mysteries of Unland #1 is in stores now!