It didn’t take Marvel Comics long to get its feet wet (and bloody) in the horror arena.

The world’s leading comics publisher snapped up the Alien and Predator licenses from Dark Horse Comics last summer–as reported here in Horror News Network–and this week Marvel gave fans an early Christmas present. They just have to wait until March to unwrap it.

Marvel is launching a brand-new series–starting with Alien No. 1–in March, as reported in cbr.com, that will take the iconic horror/science-fiction story in new and (hopefully) scream-inducing directions. Check out the eye-popping cover for Alien No. 1 by InHyuk Lee on this page.

Marvel has, of course, been a pioneer in the super-hero genre (starting in the early 1960s with people like Stan Lee, Jack Kirby and Steve Ditko), but has only had one exceptional horror title–Tomb of Dracula by Marv Wolfman, Gene Colan and Tom Palmer–back in the 1970s. Now, it appears Marvel is ready to catch lightning in a bottle again with comics based on the classic 1979 Ridley Scott-Dan O’Bannon Alien.

The new series–from writer Phillip Kennedy Johnson (Marvel Zombies: Resurrection) and artist Salvador Larroca (Doctor Doom)–will feature new and classic characters “from Earth and beyond,” according to the official description, that will “entertain both longtime fans and newcomers to the legendary saga.”

The new scenario will spotlight a Weyland-Yutani mercenary named Gabriel Cruz as he battles “a deadly new breed of xenomorph with the survival of his child hanging in the balance.”

Johnson said he was excited and surprised by this assignment. “I was as excited as anyone when I heard the franchise was coming to Marvel,” he said, “and when they asked me to write the launch, I was floored.” Johnson called the xenomorph “the single most iconic representation of terror on film.”

Larroca said drawing this series “has been like a dream come true. Alien is a creative reference to a whole generation of artists, and I’m so proud to now be illustrating this series.”

Fans can expect to see a Predator comic book series in the wake of Alien No. 1, so keep reading Horror News Network for updates on Marvel’s resurgent horror line. 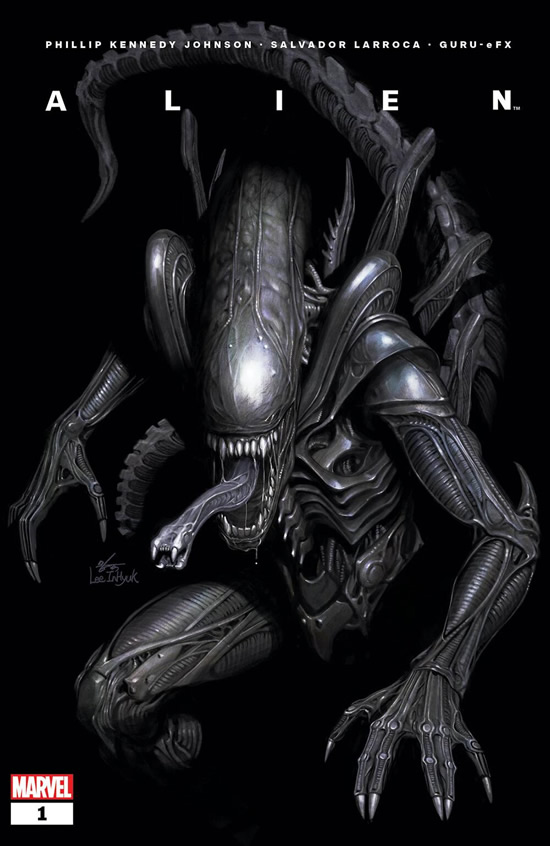