Aliens–the acclaimed sequel to the original Alien movie–has a special place in the hearts of all horror fans, and now Marvel Comics will add to that mythos this summer.

Marvel–celebrating the 35th anniversary of the classic 1986 horror/sf film from James Cameron–will publish the one-shot, double-size Aliens: Aftermath July 14, as reported by comicbook.com. This is the comic book giant’s second Alien-themed edition since taking over the license last year. Check out the striking Phil Noto cover on this page.

The comic book will take readers back to Hadley’s Hope on the exomoon LV-426, where the horrific space adventure unfolded. The comic, as explained, explores “a terrifying possible future” for LV-426.

Aliens: Aftermath–from the writer/artist team of Benjamin Percy (Wolverine) and Dave Wachter (Iron Fist: Heart of the Dragon)–is set 35 years after the tragedy of the Hadley’s Hope colony. What happened back then, as the synopsis explains, “has been shrouded in mystery.”

The story follows “a renegade crew of investigative journalists heading towards the moon that Weyland-Yutani has wiped from all records. They’ll bring back the truth even if it kills them–and what remains in that bombed-out site will try to do just that.”

It sounds like Percy had a blast writing this comic. “When I was a kid,” he said, “I had a door-length poster of a Xenomorph crashing through the wood. This is the image I would drift away to every night. I’ve been in love with these stories most of my life.” 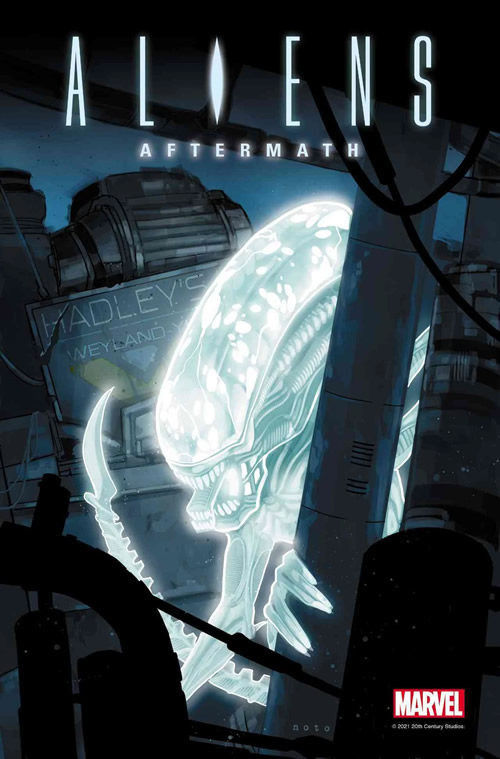