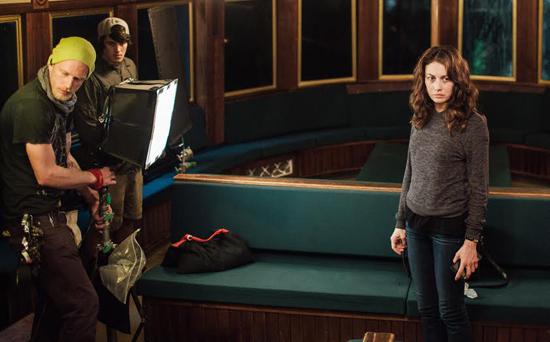 We have news that the upcoming film    Mara, from producer     Steven Schneider (INSIDIOUS, PARANORMAL ACTIVITY), has completed    principle photography. It stars Olga Kurylenko and Javier Botet.    You can view the full press release below.

FROM ‘Insidious’ AND ‘Paranormal Activity’ PRODUCER

The Solution Entertainment Group in Cannes to complete worldwide sales

Cult favorite Clive Tonge makes his directorial feature film debut on MARA from a script written by Tonge and Jonathan Frank (THE TOURNAMENT).  Centered around the mythology and true phenomena of a medical condition called ‘sleep paralysis,’ criminal psychologist Kate Fuller (Kurylenko) is assigned to the murder of a man who has seemingly been strangled in his sleep by his wife.  The only witness is their eight-year-old daughter, Sophie. As Kate digs into the mystery of an ancient demon, Mara (Botet) which kills people in their sleep, she experiences the same petrifying symptoms as all previous victims and spirals through a chilling nightmare to save herself and Sophie before she dares fall asleep again.

“MARA looks amazing and promises huge potential for the worldwide marketplace.  Clive has shot an incredible film that confirms his status as a leading horror film director.  We are beyond delighted to have such a thrilling film in the can,”said Nestel.

Says Schneider, “Clive has shown himself to be a phenomenal talent and horror fans are going to love MARA!  Olga and Javier provide a perfect acting combination.  It’s innovative, vigorous and exciting and I am delighted to be a part of this new potential franchise with our production partners.”

Said Mann and Barker, “When we started developing MARA we only dreamed of such a perfect team collaboration.  Clive and Jonathan’s talent coupled with our partnership with a visionary like Steven Schneider gave us the best possible platform to make an incredibly entertaining and chillingly crafted piece of horror.”

Clive Tonge is a British filmmaker who began his career as a Music Video Director for multi-platinum bands such as Shed 7, Elastica, 808 State and Maximo Park.  His shorts have screened internationally in renowned film festivals including the Cannes Film Festival, Los Angeles Short Film Fest and Edinburgh Film Festival.

Olga Kurylenko rose to international fame as “Camille” opposite Daniel Craig in QUANTUM OF SOLACE.  Her other recent projects include the blockbuster sci-fi film OBLIVION with Tom Cruise and in the lead role of Terrence Malick’s TO THE WONDER with Ben Affleck, The Solution’s THE NOVEMBER MAN directed by Roger Donaldson and starring Pierce Brosnan and THE WATER DIVINER with Russell Crowe.

Javier Botet is best known for his frightening performance as the vengeful mother in MAMA alongside Jessica Chastain. His eerie performance grabbed the attention of Guillermo del Toro who later cast him in CRIMSON PEAK with Mia Wasikowska and Tom Hiddleston.  Botet will soon be seen in Universal’s THE MUMMY starring Tom Cruise as well as 20th Century Fox’s THE OTHER SIDE OF THE DOOR starring ‘The Walking Dead’s’ Sarah Wayne Callies.

Kurylenko is repped by WME and Tavistock Wood.