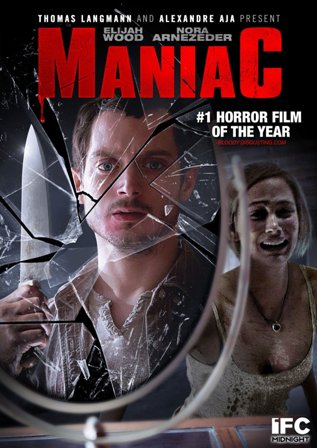 Well this movie certainly lived up to all of the hype surrounding it.  To be completely honest, when the Horror News Network staff does our best of 2013 staff picks, this one will be under serious consideration for my choice for the year.  I did not know what to expect of Elijah Wood (Deep Impact, The Good Son) in this movie considering the fact that his movie credentials, while sterling, don’t contain much of a horror past.  Thanks to Maniac, he has cemented himself as an actor who can, in my humble opinion, tackle any role thrown his way – and while he may be best loved as Frodo Baggins, his portrayal of Frank Zito is not to be ignored.

The film begins with a first-person point of view and stays that way pretty much throughout.  Frank, the owner of the eyes we are looking through, sits patiently in a car watching a street corner where two girls hail a cab.  One of them gets in while the other stays behind.  She is approached by a guy trying to get her to go for a ride in a limousine with himself and some of his friends.  As she turns down his offer, we can hear Frank whispering to himself before following her down the street.  She eventually catches on that she is being followed and begins running.  As he drives away he says to himself, yet indirectly toward her, that it’s ok because he knows where she lives.  The creepiest part is not only that he knows her name, Judy, but the way he says it.

We are then treated to the opening credits while getting more of a glimpse into what Frank Zito sees on a daily basis, again all from a first-person point of view.  During this montage of his day-to-day activities it’s hard not to notice how the score is oddly reminiscent of a more classic era of horror movies.  It brought me back to watching lower budget horror movies as a child growing up in the 80’s – that grimy feeling that came with a movie’s accompanying background music.  Both the score and certain soundtrack choices in Maniac exemplify that feeling almost right off the bat.  As a matter of fact the use of Q Lazzarus’s Goodbye Horses seems like a highly suspect homage to another famous movie serial killer…

After the credits, Frank watches a woman exit a cab in front of her apartment building.  Using a hunting knife, he slashes the cables extruding from an electrical panel, effectively cutting the power to the hallways which now go dark.  He silently stalks her as she comes up the stairs and makes her way down the darkened corridor to her apartment.  As she opens the door, she seems to sense him behind her and as she is turning he whispers, “Please don’t scream.  You’re so beautiful.”  She opens her mouth to scream but it will never come out.  Frank has jammed his hunting knife through jaw and up into her skull.  She is instantly dead yet her eyes remain open, staring at him.  As he holds her up by her hair he caresses her face before using the knife to scalp her.  Her body falls to the floor lifeless in front of him.

It’s perfectly fitting that this is the moment where the title of the movie is plastered across the entire screen.  Frank Zito IS a maniac.  This is how he sees his life.  This is what it’s like to crawl inside the mind of a delusional serial killer.  When we hear shocking news accounts of historical serial killers we know that there will eventually be numerous biographies written by various people who studied and/or interacted with these people once they are eventually apprehended and convicted of their crimes.  Sometimes those third person accounts are even made into movies.  Some do well while some end up on the Lifetime channel with former members of the Brat Pack.  What Maniac manages to do (particularly well, mind you) is to go beyond what a biographer will tell you about long after the fact and actually bring you into the mind of the serial killer during the height of his passion as well as during his lulls.

We learn what turned Frank into the sociopath he is now through flashbacks to earlier points in his life.  What most people outside of his home and business will never see the viewer is given privy to.  His inability to adequately interact with females leads him to surround himself with mannequins, which he talks to as if they were living, breathing human beings.  All of this is seen by the viewer as only Frank Zito can encounter it.  His imagined disagreements and one-sided arguments with the mannequins; his awkwardness during actual human contact; his self-musings; his headaches; his panic – we see and, to an almost uncertain extent, feel it all along with him.

This rollercoaster of a personality receives its biggest test in the form of a pretty young French photographer named Anna (Nora Arnezeder) who takes an interest in the work Frank does with mannequins.  As the two form a bond it becomes clear to the viewer that Frank is interested in more than just friendship, but he acts relatively reserved in her presence.  When he is introduced to her friends they treat him with disdain and condescension.  All of this in addition to Frank’s pre-existing psychosis does more than test his limits, further distorting his perception to the point where his imagination takes over his ability to control himself in reality.

Again, I can’t stress enough how well done this movie was.  It’s clear that the entire cast and crew were all on the same page from the cinematography all the way to wardrobe.  It’s a rare instance that you will hear me state that I enjoyed a film’s “remake” or “reimagining” more so than the original movie, and while the original 1980 flick will forever be a classic in the genre, Elijah Wood as Frank Zito sets the modern Maniac up as an instant classic in its own right.