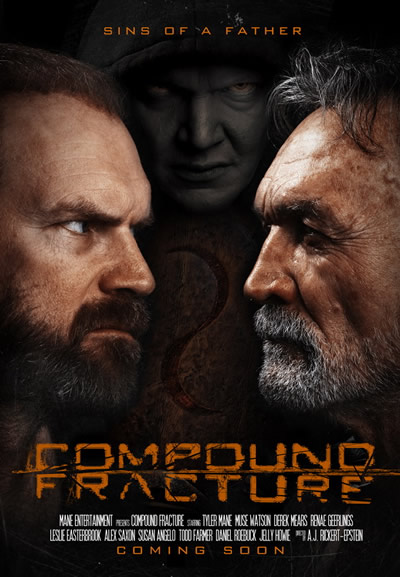 After going on a grindhouse-style tour this year with their first feature, COMPOUND FRACTURE, Mane Entertainment’s Tyler Mane and Renae Geerlings have signed on with LA-based distribution company Level 33 Entertainment for domestic distribution of the film.

COMPOUND FRACTURE, starring Mane, Muse Watson, Derek Mears and Leslie Easterbrook, has played in limited theaters across the United States and Canada, and a limited film festival circuit, to glowing reviews, even winning “Best of Festival” at the Hot Springs Horror Film Festival this September. Mane Entertainment and Level 33 are now teaming up for a wider North American release, just as Mane Entertainment has announced their second film, PENANCE LANE.

Written by Geerlings, COMPOUND FRACTURE is a supernatural thriller about a broken family with a history of abuse and dementia that is forced to find a common ground to fight a greater supernatural threat. Muse Watson who played Ben Willis in I KNOW WHAT YOU DID LAST SUMMER, plays the eccentric father of Mane, who portrayed Michael Myers in Rob Zombie’s HALLOWEEN.  Derek Mears, famous for his role as Jason Voorhees in the new FRIDAY THE 13TH, chills as the vengeful spirit bent on destroying the family completely.

Level 33 Entertainment distributes films across all media platforms and the company’s releases can be found in every major retail and rental account including Walmart, Target, Best Buy, Amazon, Redbox, Blockbuster, Netflix, iTunes, Google Play, Playstation, Hulu, DirecTV, Dish, Comcast and Time Warner. Formed in 2010, the team brings a wealth of experience from Paramount, 20th Century Fox and The Walt Disney Studios. The company’s significant industry expertise helps ensure each film has the maximum opportunity to reach its target audience.

Mane Entertainment’s second feature PENANCE LANE is in the financing stage and has just announced a crowd funding campaign through IndieGoGo. “We loved the way a personal appearance tour got the fans involved and invested,” says Mane. “Doing a crowdfunder gives us an opportunity to pull back the curtain from the beginning of production.”