And just to make this comic more “monstrous”, X–Men: Curse of the Man–Thing No. 1 will guest-star a unique X-Group known as the Dark Riders–mutants who definitely fall into the horror category.

This comic–as reported by screenrant.com–will showcase the Dark Riders as they travel to the Florida Everglades to help Man-Thing combat the threat posed by the villain called Harrower. Look for this special issue at your local shop May 5.

This fear-fraught comic–from the writer-artist team of Steve Orlando and Andrea Broccadro–concludes the story arc originated in Avengers: Curse of the Man–Thing No. 1, which introduced Harrower.

It turns out this super-villain has stolen Man-Thing’s power to burn anyone who feels fear, and uses that arcane ability to release “vegetal growths around the world that are burning up” people everywhere.

Enter the X-Men’s Dark Riders: Magik, Marrow, Forearm, Shark-Girl, Wolf Cub and Mammomax. Not exactly the kind of mutants you’d want to bring home to mother, but a hardy bunch of do-gooders you would want on your side in a struggle to protect the planet.

Man-Thing–created by writers Stan Lee, Roy Thomas and Gerry Conway and artist Gray Morrow back in 1971–started out as Dr. Ted Sallis, a scientist who had been trying to recreate the Super-Soldier Serum that gave birth to Captain America decades before. Unfortunately, his car careened into a mysterious swamp, and the combination of science and magic transformed Sallis into Man-Thing. And, as the legend goes, “Whatever knows fear, burns at the touch of Man-Thing.”

Keep reading Horror News Network for updates on the continuing saga of Man-Thing, as well as all new horror titles from Marvel Comics. 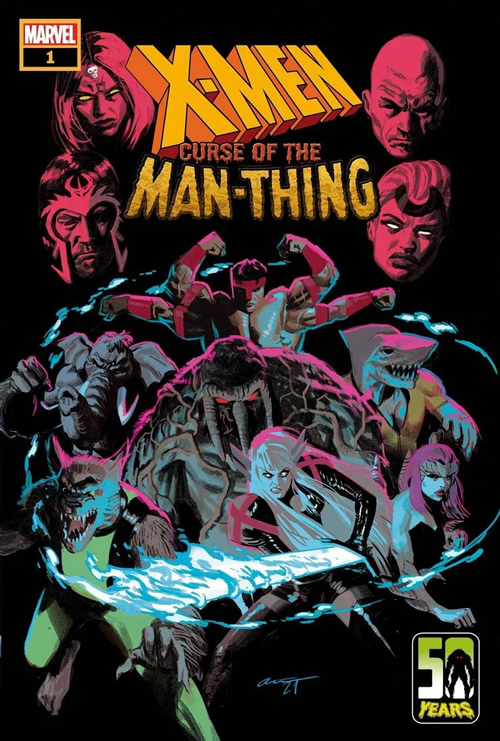