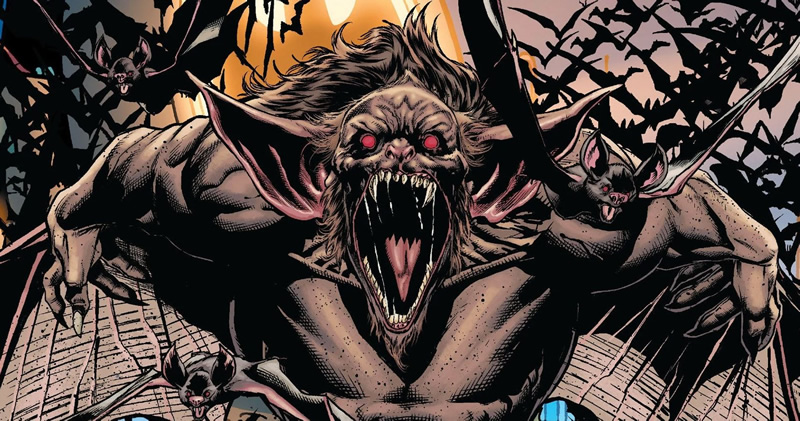 When you think of The Batman, you probably don’t think horror (unless you count the fear The Dark Knight puts into the hearts of criminals or the insanity displayed so wonderfully by the Joker), but there is one “creature of the night” in Gotham lore.

Kirk Langstrom, better known as Man-Bat, debuted in Detective Comics 400 (June 1970). A creation of Frank Robbins and Neal Adams, in collaboration with editor Julie Schwartz, this anti-hero has been popular enough to appear in comic book pages, as well as TV (both live and animated) and feature films.

Man-Bat was even the star of his own short-lived comic book series in 1975-1976, even if it only lasted two issues before being cancelled.

As The Batman found out to his dismay, Langstrom, a zoologist, developed an extract intended to give humans a bat’s sonar sense. Unfortunately (as always happens in these types of stories), he decided to test his formula on himself.

The side effect was horrible. He was transformed into a gruesome hybrid of a man and a bat, with his mind suffering as much as his body. As the Man-Bat, Langstrom’s strength and agility are enhanced to superhuman levels and he possesses a form of sonar, which help him fly with a pair of leathery bat wings. His terrifying rampage was only halted by the intervention of the Dark Knight, who found a way to reverse the effects of the serum.

But Langstrom didn’t stop there (or we may not talking about him now). He persuaded his wife Francine to try his concoction and (of course) she transformed into the She-Bat. Again, The Batman came to the rescue, restoring the couple back to normal.

But not everything was doom and gloom for the embattled Man-Bat. There were times he was able to retain enough of his sanity to do some good. During one of these periods, he worked with the detective Jason Bard. On another occasion, Jimmy Olsen accidentally puts Superman in a cave occupied by Man-Bat to protect him from kryptonite radiation. Man-Bat calms the maddened Superman and then summons Hawkman, who helps the Man of Steel overcome the radiation.

Man-Bat has even ventured outside the four-color page and into the realms of television and animation. In a sense. Langstroms’s alter ego is alluded to in the TV series Gotham when, in the fourth season finale, two junkies search for items in a deserted church. Suddenly, a man-like creature drops down and releases a pair of bat wings as it shrieks. It was never made clear if this was, in fact, Man-Bat (but it probably was).

Man-Bat also appeared in the animated Batman series. In these shows, Man-Bat is voiced by Peter MacNicol while special sound effects provide Man-Bat’s vocal effects. This version of Man-Bat is actually an employee of Wayne Enterprises doing research on bats. But Bruce Wayne becomes suspicious of Langstrom’s methods and motivations, and discovers he is obsessed with The Batman. Langstrom then (of course) drinks his new serum and transforms into Man-Bat. A battle ensues, and The Dark Knight eventually finds a way to subdue his new foe and revert him to his human form.

Man-Bat even had an influence on the Silver Screen, albeit in a tenuous way. Langstrom reportedly was considered as an antagonist in one of the unproduced scripts for a third Joel Schumacher Batman film, Batman Unchained, but was dropped in favor of the Scarecrow and Harley Quinn.

In addition, a creature closely resembling Man-Bat briefly appears in 2016’s Batman v. Superman: Dawn of Justice, a film that was panned by critics, but generally enjoyed by fans. If you look closely, you’ll see a creature emerging from Martha Wayne’s crypt and attacking Bruce as he visits his deceased parents’ graves in a dream sequence.

Was that the twisted Man-Bat? Only Bruce knows for sure, and he’s not telling.