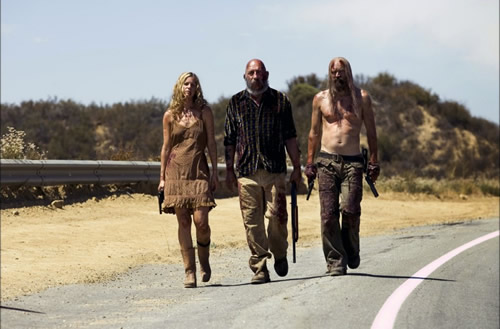 According to cinematic law, movie sequels are not allowed to be better than the original.  There are, of course, exceptions to this rule depending on who you talk to (Godfather II, Empire Strikes Back, etc.); but by and large, the follow-up is almost always inferior.  While on his uneven, equally criticized and panned directorial career, Rob Zombie has managed to shatter this rule right off the bat.  While his directorial debut, House of 1000 Corpses, was met with limited success and continues to command a hardcore fan base (including HNN’s own Larry Dwyer), some have shrugged the throwback film off as just another slasher, Texas Chainsaw rip-off.  Personally, while I felt the same frustration sitting through the movie as everyone else in the theatre, I recognized that Zombie took chances artistically and visually in order to enter the horror movie realm with a bang.  Which is what made his sequel, The Devil’s Rejects, all the more satisfying.  Zombie realized that there were mistakes and overly-ambitious risks that didn’t pay off, and was on a mission to make amends to the horror movie masses.  Here, in no particular order, are the top five reasons why Rob Zombie’s brilliant second-film made us forget about his swing-and-miss debut….well, at least until he made the fatal error of tackling the Halloween franchise.

The Devil’s Rejects, overall, is just a much more original concept than House of 1000 Corpses (which has rightfully been accused of being too similar to The Texas Chainsaw Massacre and The Hills Have Eyes, among others).  Otis, Baby and Captain Spaulding are driven out of their element as they trek their way to anywhere that could be considered safe while being chased by rogue Sherriff Wydell and his hired band of mercenaries.  The villains from House are now shown in a completely different light, which brings me to the next reason….

The Firefly family proved in House to be the most vile, disgusting, violent and murderous clan on the face of the earth, and the first half of The Devil’s Rejects cemented this title for the audience.  But something funny happens about mid-way through the film:  we begin empathizing, and downright sympathizing, with these cold-blooded killers.  As Wydell and his goons capture and torture the trio, they start taking on a more “human”, or vulnerable, characteristic that was never present when Otis was killing Banjo & Sullivan, or while Captain Spaulding was carjacking a mother and her young son.  In a sick sort of way, we can see ourselves rooting for their survival from certain death.  In House, we were left wondering when they would finally be caught; in Devil’s Rejects, we’re wondering when they’ll finally escape.  That’s quite a heavy contrast.

Flowing over with ’70s Southern rock, catchy blues-funk, and killer sound-bytes from the film, the soundtrack for The Devil’s Rejects is legendary.  Maybe not quite “Judgment Night”-legendary, but incredible all the same.  From the opening sequence set to “Midnight Rider” all the way to the climactic highway standoff with “Free Bird” leading the way, each song selected (presumably by Mr. Zombie) provides both a fitting mood to the scene as well as a nostalgic nod to one of music’s best eras.  This isn’t to say that the soundtrack to House of 1000 Corpses isn’t good ( I own this one as well), but I’ll take Joe Walsh’s “Rocky Mountain Way” over Rob Zombie, Trina and Lionel Ritchie’s confounding funk-fest version of “Brick House” any day of the week.

The Supernatural Element Is Gone

Let’s face it…House could be a good slasher movie with a few tweaks.  One of those changes would have to be the whole “Dr. Satan” alternate realm.  If Zombie wanted this to be the big difference between his movie and those others in the genre, he wasn’t successful in my view.  The reason that Devil’s Rejects is scarier has to do with the believability element.  Sure, these three seem to slip out of peril after several close calls and seem to catch all of the breaks when they’re committing their heinous acts.  But overall, there’s always the sense that these are events that could REALLY HAPPEN, by villains that could REALLY EXIST.  Say what you will, but an underground lair set up like a subterranean hospital of hell inhabited by ghouls and a paranormal entity ready to operate probably won’t be a story you’ll see covered by your local newscast any time soon.  But three murderous vigilantes on the run and continuing their trail of cross-country terror and violence….this is something that unfortunately is conceivable in America.

The Cast Was Expanded…For The Better

Sure, House of 1000 Corpses had the incomparable Bill Moseley, Sid Haig, Karen Black, and the can-only-be-cast-for-her-husband’s-movies Sheri Moon Zombie.  Throw in Rainn Wilson and Mr. Nerdist himself, Chris Hardwick, and you have a pretty decent cast.  But The Devil’s Rejects turned the volume up to 11…adding horror and independent heavyweights William Forsythe, Ken Foree, Danny Trejo, Diamond Dallas Page, PJ Soles, Geoffrey Lewis, EG Daily, Michael Berryman, etc.  This is as close to an ensemble cast that Rob Zombie has ever created.  It would be easy to think that with such a large group, the main characters would not be given the attention that they command.  However, that is certainly not the case in this film.  In fact, Sid Haig’s Captain Spaulding, in particular, is one that is explored much more deeply and in-depth than the original movie (thankfully).  Also, the gore and violence are kicked up a notch too.  The Devil’s Rejects is probably the best example from his portfolio of work where Zombie’s knack for being overly-artsy actually works.  Well, it works much more than Lords of Salem, at least.