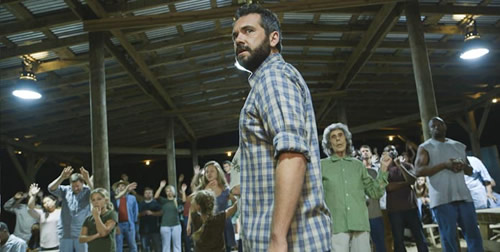 The Wagner/Cuban Company’s Magnet Releasing, genre arm of Magnolia Pictures, announced today that they have acquired North American rights to THE SACRAMENT, a chilling death-cult thriller written, directed and edited by Ti West. Featured in Venice and Toronto, THE SACRAMENT stars AJ Bowen (TheHouse of the Devil), Joe Swanberg (You’re Next) and Amy Seimetz (Upstream Color), and features a star-making performance from Gene Jones as the charismatic cult leader known as “Father.” Magnet and West are frequent collaborators, working together on West’s landmark horror filmThe House of the Devil, as well The Innkeepers, V/H/S and THE ABCs OF DEATH. THE SACRAMENT was produced and financed by Worldview Entertainment. Eli Roth, Jacob Jaffke, Peter Phok, and Worldview’s Christopher Woodrow and Molly Conners produced.

THE SACRAMENT stars Bowen and Swanberg as reporters for VICE Media who journey to a remote Central American compound along with a photographer (Kentucker Audley) hoping to reunite with his sister (Seimetz), who has dropped off the map after struggling with drug addiction. They find an isolated community of true believers devoted to a shadowy but charismatic figure called “Father.” Skeptical at first, the journalists begin to come around to the group’s utopian claims, until things rapidly take a very dark turn.

“We’re incredibly pleased to be furthering our fruitful collaboration with Ti, who continues to be one of the most exciting genre filmmakers working today,” said Magnolia President Eamonn Bowles. “It is high praise and no understatement to say that THE SACRAMENT is Ti’s best film to date.”

“There is no distributor as dedicated to consistently bringing the highest quality independent films to audiences nationwide, whether it be through theatrical, or video on demand,” said Ti West. “This will be my fifth collaboration with Magnolia Pictures, and I couldn’t be happier. They are the perfect home for a genre bending, confronting film like “THE SACRAMENT.”

Producer Eli Roth said: “I’m thrilled to have Magnolia releasing the film. Ti West made an incredibly smart, tense thriller with riveting performances and Magnet is the perfect distributor to really position this film to cross over with fans and critics alike. The response in Toronto was phenomenal, and we’re thrilled audiences across the country will get to discover what many consider Ti’s best movie.”