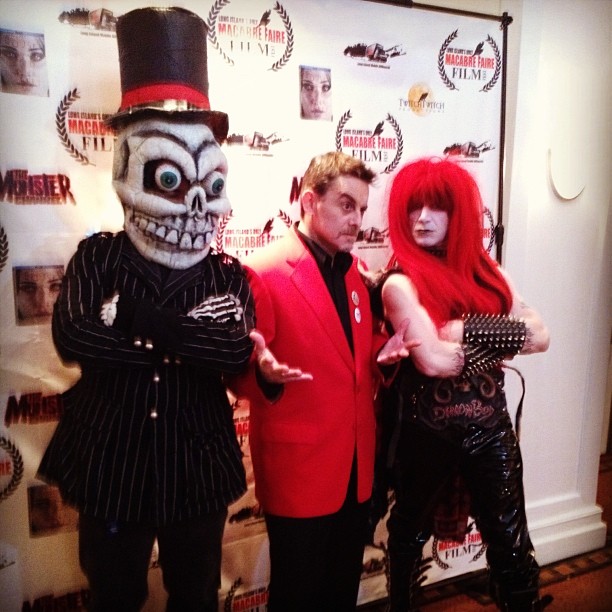 The 5th annual Macabre Faire Film Festival went out with a bang on Sunday evening with an award ceremony that honored the best independent horror films, artisans, and performers of 2013. The day began with film screenings as well as workshops and presentations that explored all aspects of the genre,  whether it was tips for actors and actresses, shooting films in 48 hours, crowd funding, or comedy writing. A stellar schedule of films highlighted the vast array of creativity and talent in the indie horror world. A few of the notable films were

An ice queen and a henpecked nebbish in a rock marriage take a ride to a bed and breakfast to work on their relationship but decide to settle their marital problems in a much more vicious fashion.  An intense short film with an EC comics tone.

The Cordycep’s Principle and Thing in the Shed—directed by Mike T. Lyddon

Two impressively creepy shorts filled with classic thrills and Hitchcockian dark irony.  Lyddon shows much ingenuity with these films, like if Lovecraft had written episodes of The Outer Limits.

Very clever film that boils down every babysitter horror cliché to a 5 minute blast of suburban satire.

The Wretched—directed by Richard Greenwood Jr.

A teaser for a full length epic concerning Roman legions, barbarians, and a zombie plague in 4th Century Germany. Stunning photography and an authentically ancient mood enhanced this tale of blood, honor, and brutality.

The day’s festivities built to the much anticipated bestowing of the coveted Macabre Faire Film Awards for the finest accomplishments in indie horror. Hosted by the king and queen of Long Island horror LC Macabre and Adam Ginsberg, the ceremony began with a performance by LC’s nieces Madison and Cheyenne who delighted the crowd with their rapping and dancing skills.  The winners were

Best Editing in a Short: Fist of Jesus

Best Sound in a Short: Mosaic 33

Best Soundtrack in a Short: One More for the Road

Best Special Effects in a Short: Fist of Jesus

Best Cinematography in a Short: The Wretched

Best Actor in a Short: Roger Floyd (The Confession)

Best Editing in a Feature: Art of Darkness and An American Terror (tie)

Best Sound in a Feature: Art of Darkness

Best Soundtrack in a Feature: Art of Darkness

Best Special Effects in a Feature: Truth or Dare

Best Cinematography in a Feature: Sea of Dust

Best Actor in a Feature: Ryan Kaiser (Truth or Dare)

Best Director of a Feature: Haylar Garcia (An American Terror)

The Macabre Faire Film Festival Award Ceremony concluded an unbelievable three days devoted to the all the potentials of independent horror and deserves its status as one of the premiere horror film festivals in the world.