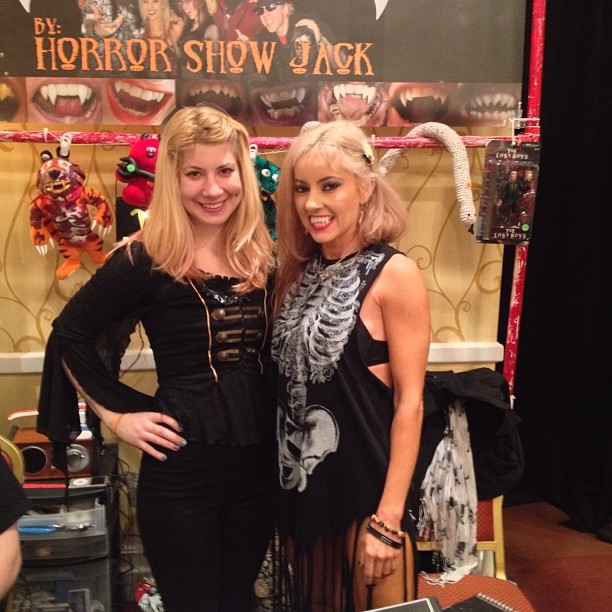 The premiere horror event on Long Island offered a full schedule of celebrities, vendors, workshops, panels, and, most importantly, films celebrating all aspects of the genre.  Informative panels such as AtmosFear and Soundscapes, How to Die Like a Pro, and For Clearer Screenplay Writing offered advice and resources for aspiring filmmakers while The Right Stuff: Horror Filmmaking Ingredients, Maverick Movie Makers: The Texas Auteur Theory, and The World that is The Evil Dead brought together directors, actors, actresses, artists, and composers such as Alan Howarth, Michael Stevens, Arin MacLaine, James Christopher, Ryan Meade, and Tom Sullivan to discuss their experiences in the film industry as well as their current and future projects. Their enthusiasm, approachability, and openness were particularly inspiring to those hoping for a career in horror films. Cutting edge production and distribution companies such as Darkriver Productions, Yellow Ape, Twitchy Dolphin Flix, Mass Grave Pictures, and Wild Eye Releasing talked shop, networked, and proudly displayed their talent and films.  Saturday offered a roster of over 50 films screened, from shorts to feature length movies that all explored the multi-faceted world of horror. Some of noteworthy films:

The Lodge—directed by Kev Harte

As a news report provides details of his crimes, a predator hunts his female prey and keeps them captive in a dilapidated house.  Perfectly conjures up a bleak, dreary atmosphere, kind of like P.I.L.’s “Poptones” put to film.

Caught in My Eye—directed by William InStone

A day in the life of an obsessed sadistic voyeuristic stalker and the unfortunate object of his desire. The film exudes seediness like a 21st century Don’t Answer the Phone but connects both modeling and serial killing as objectifying those who are trapped in the gaze of the perpetrator and the camera. And yes, the title is a reference to the classic song by The Germs, heard here in Danzig’s awesome cover version.

Fist of Jesus—directed by Adrian Cardona and David Munoz

Imagine if early Peter Jackson directed King of kings and you’ll begin to understand the genius lunacy of this short film. Jesus raises Lazarus from the dead, unwittingly initiating a zombie apocalypse that only Judas and our Lord and Savior can put right with a kung fu and spaghetti western inspired blood bath. Comedy and gore transubstantiate into a thoroughly entertaining experience. A must see.

A harrowing depiction of illness, domestic abuse, and psychosis. Director Villano spoke before the film, discussing how her movie was a way to deal with her own medical disabilities.

Sea of Dust—directed by Scott Bunt

A feature length film that harkens back to the days of Hammer horror, Bunt uses the legend of Prester John to craft an effective tale of evil that infects the lives of a rural countryside village.  Featuring Tom Savini and the last role of horror goddess Ingrid Pitt, Sea of Dust recalls Poe’s famous “dream within a dream” quote, as secrets, past indiscretions, and sacrifice all create demons of the mind.  Imagine if Jess Franco directed Downtown Abbey and you might be able to wrap your head around this film.

A disembodied hand wreaks havoc on the life and sanity of a young woman. Suspenseful, at times absurd, and suggests the cyclical nature of violence and madness is inescapable.