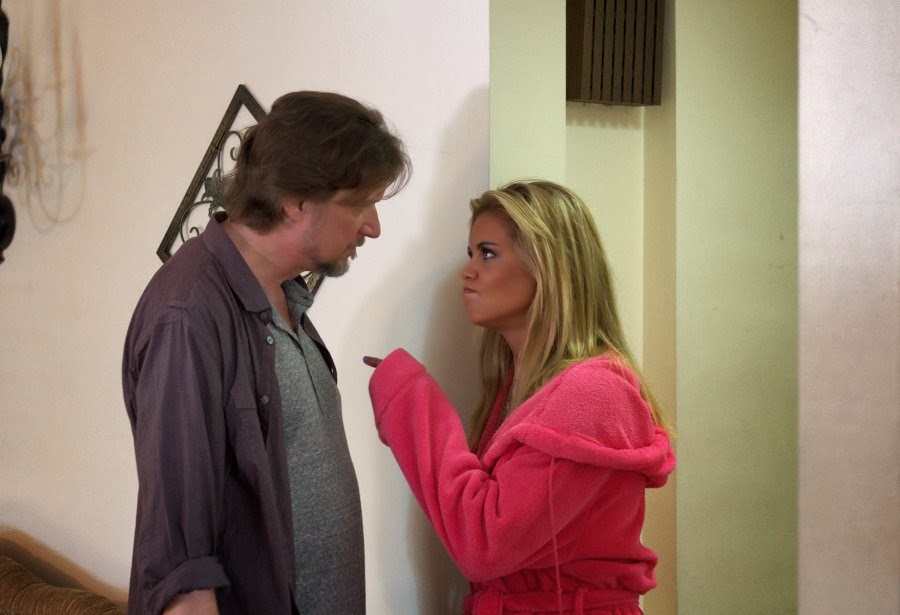 Lucky Bastard is the eponymous website where members compete for a chance to have sex with one of the sites porn stars.  Prior to getting into the “found footage” part of the story, we see the police raid a home where several dead bodies are discovered.  The crux of the film concerns itself with website owner Mike (Don McManus) as he pitches the Lucky Bastard concept to Jenna Jameson-level star Ashley Saint (Betsy Rue). Ashley is reluctant, but ultimately sympathetically gives in after viewing the audition tape ofLucky Bastard member Dave (Jay Paulson). With foresight as to how the story ends, the viewer is forced to watch the narrative unfold up to the gory conclusion.

The found footage format is difficult to pull off from a filmmaker standpoint and even more difficult to watch from an audience standpoint when not expertly executed.  Examples of better-made “FF” films for me include Cloverfield and Trollhunter.  As for Lucky Bastard, I feel it falls flat on most accounts.  Better than two-thirds of the movie are used for exposition and set up for a climax that we already know is coming.  There is zero tension during this buildup as we find that Dave is frustrated and just wants to screw Ashley without any of the fan faire and interference of the Lucky Bastard production team.  When the killings themselves begin, they are often presented in wide shot with no action or anticipation granted.

The only area where I feel Lucky Bastard sets itself apart form others in its class is in the acting. For the most part, the cast is comfortable with the guerilla-style filmmaking – especially McManus, who needs to serve as both filmmaker and tour guide throughout the narrative.

Lucky Bastard could take a cue from a few of the marginally better “FF” films V/H/S and V/H/S/2 where the stories are kept to under 20 minutes, allowing little time for monotony to set in.